A pair of doors in Cornhill

When I started this blog I never thought I would be dedicating an entire issue to a pair of doors, but I hope you will agree that in this case it is appropriate. 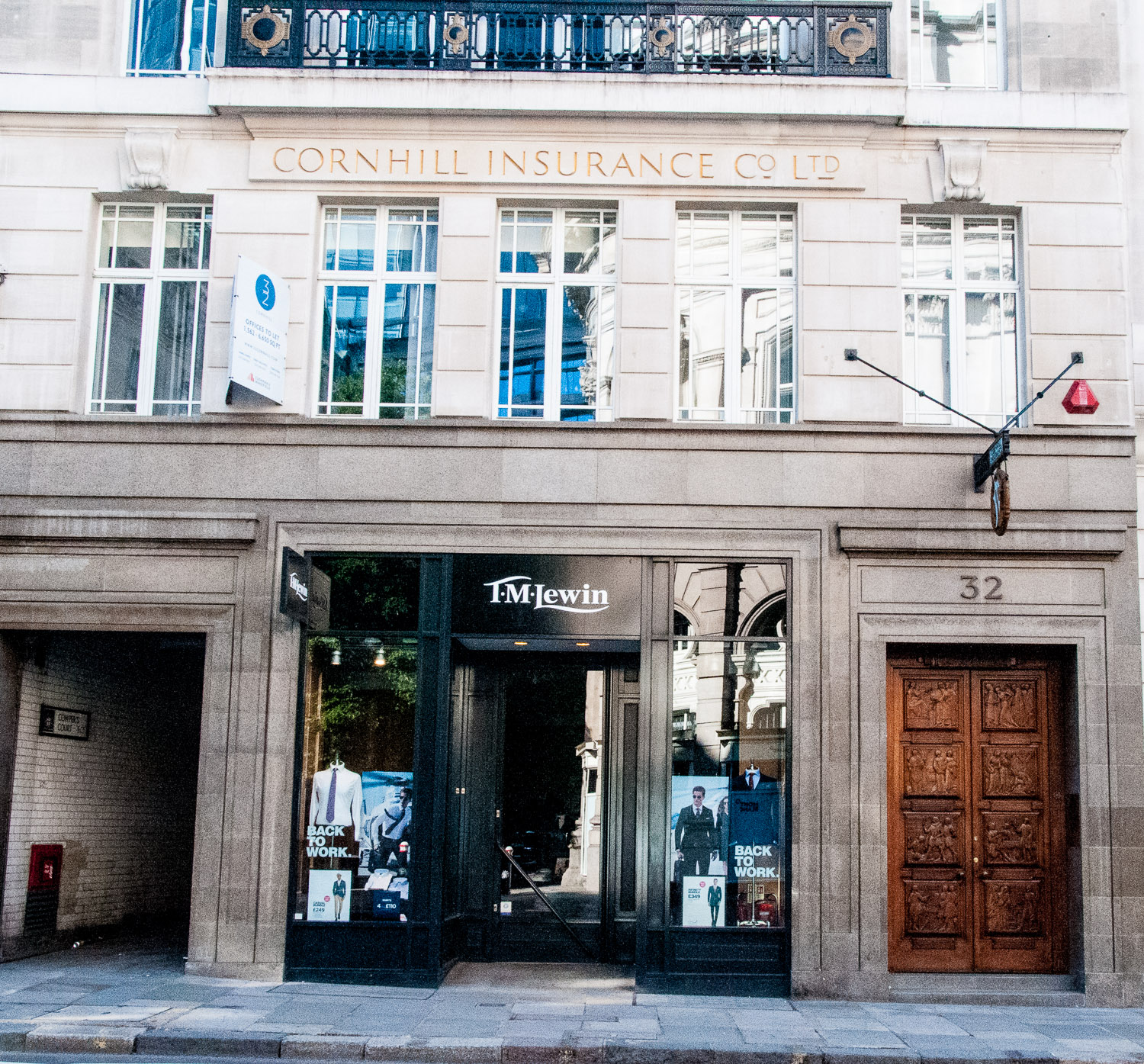 Here is a closer view … 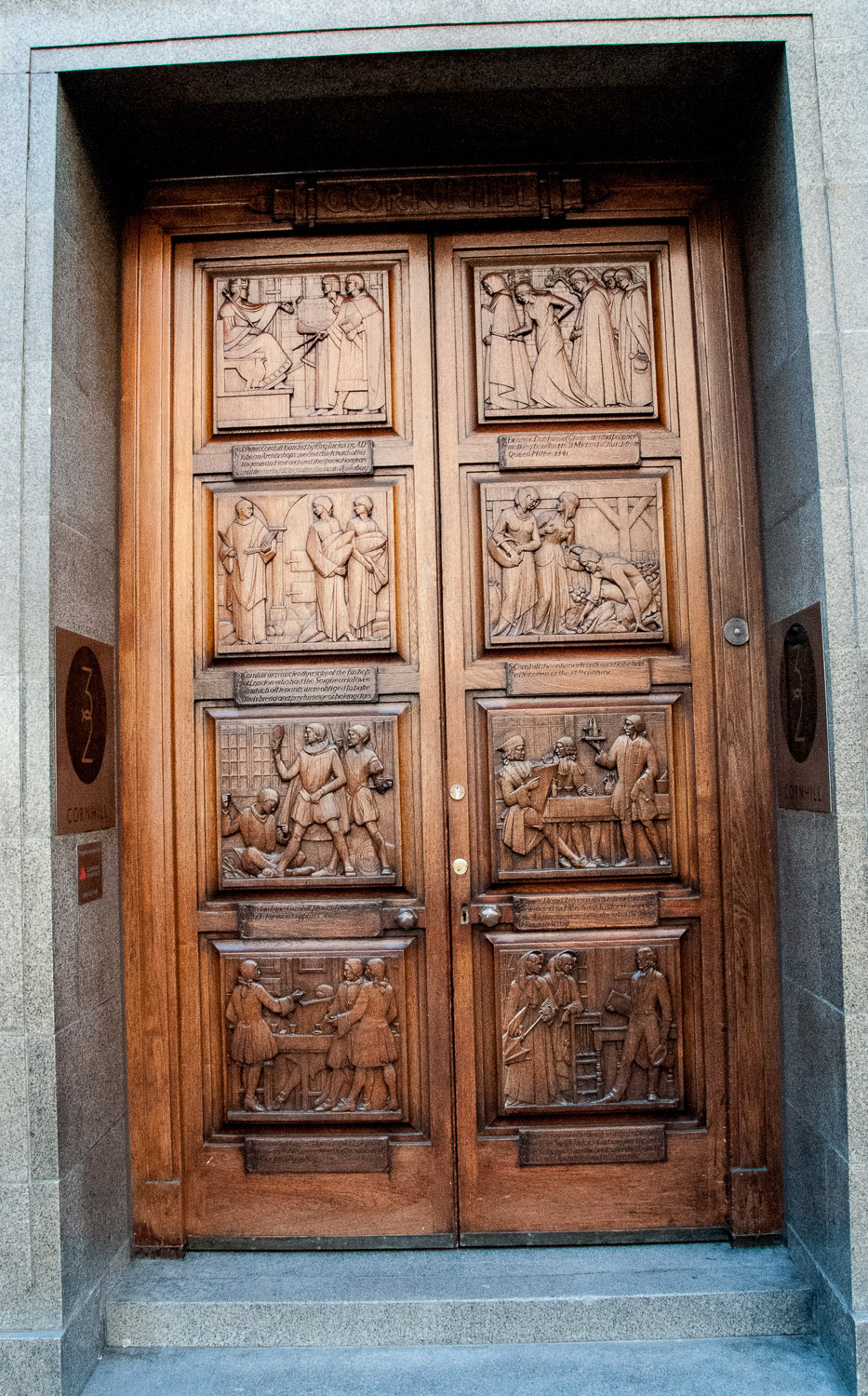 Walter Gilbert (1871-1946) designed these doors in 1939. He was a designer and craftsman who developed his visual style in the Arts & Crafts movement at the end of the nineteenth century and then applied it to a wide range of architectural commissions in the twentieth century, including the gates of Buckingham Palace, sculpture for the facade of Selfridges and some distinctive war memorials. In this instance, he modelled the reliefs in clay which were then translated into wood carvings by B.P Arnold at H. H. Martyn & Co Ltd of Cheltenham.

They tell of events that took place in the area over the centuries. Below is a picture of each panel along with a description … 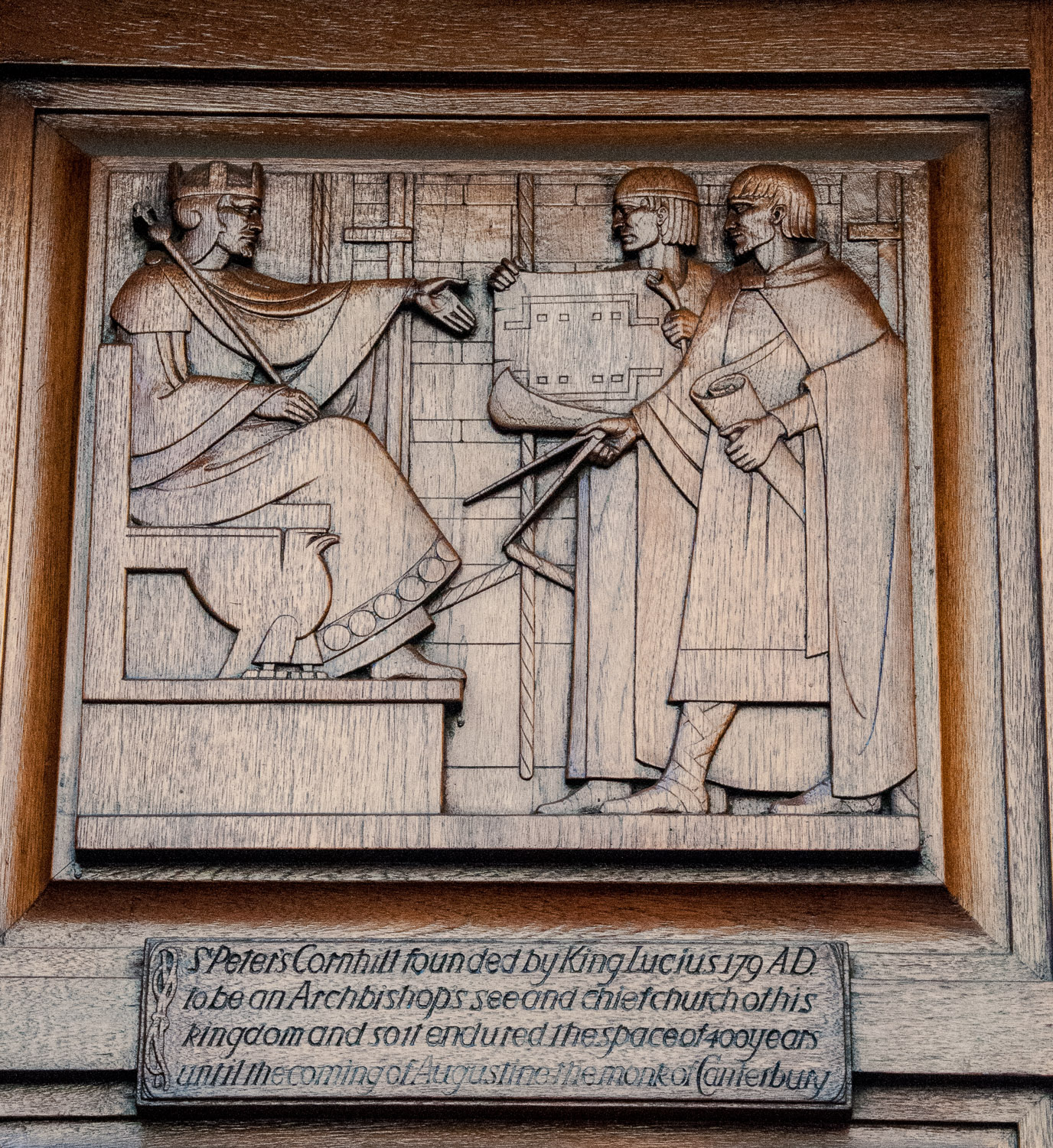 ‘St Peter’s Cornhill founded by King Lucius 179 A. D. to be an Archbishop’s see and chief church of his kingdom and so it endured the space of 400 years until the coming of Augustine the monk of Canterbury’.

An architect holds up the church plans and a builder holds up a compass. 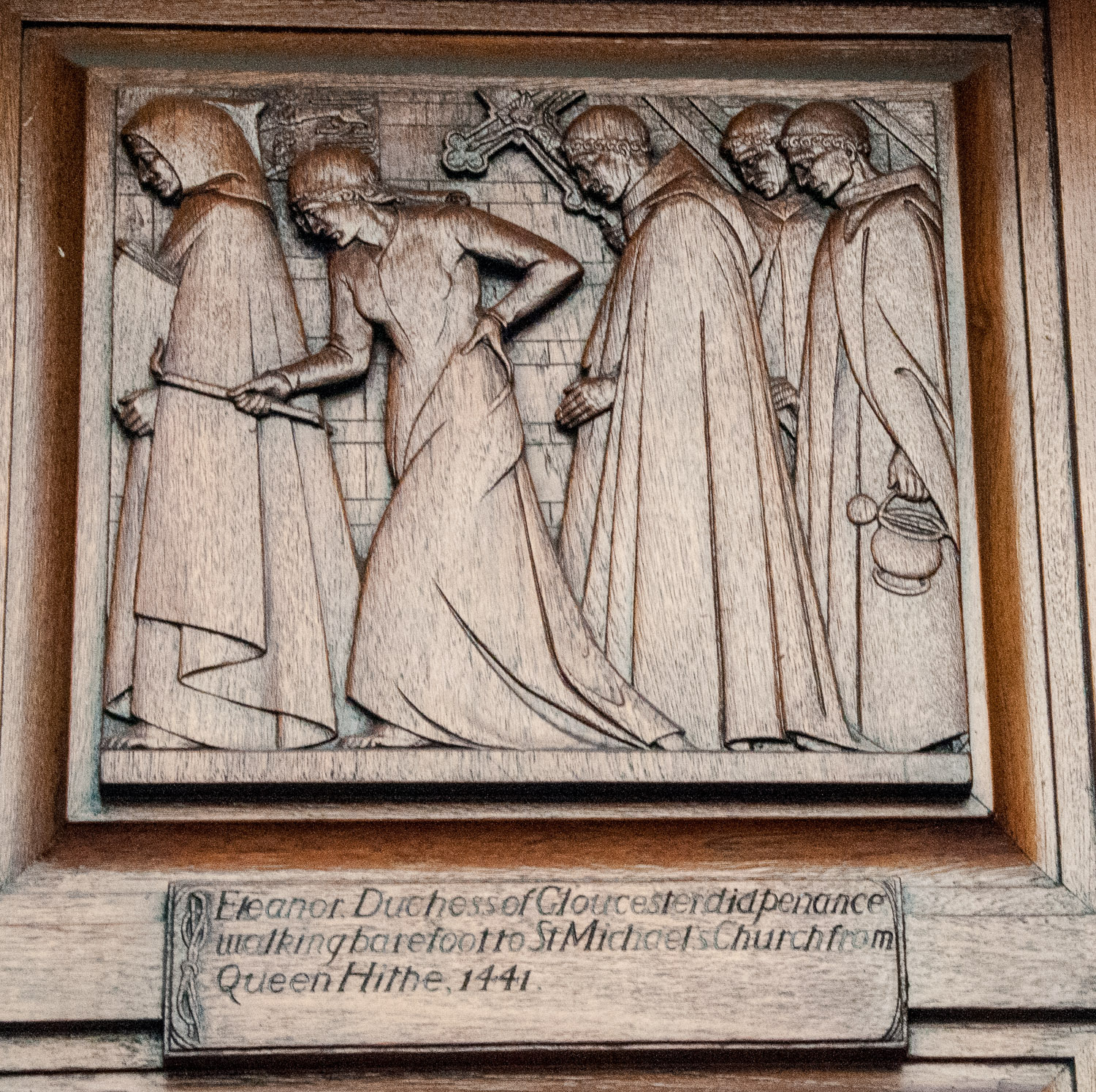 The Duchess, holding a lighted taper, performs public penance having been convicted of sorcery in 1441. Rather unwisely, because it was ‘treasonable necromancy’, she had asked the astrologers Thomas Southwell and Roger Bolingbroke to cast the horoscope of the then King Henry VI. Southwell died in the Tower of London, Bolingbroke was hanged, drawn and quartered, she was sentenced to life imprisonment. 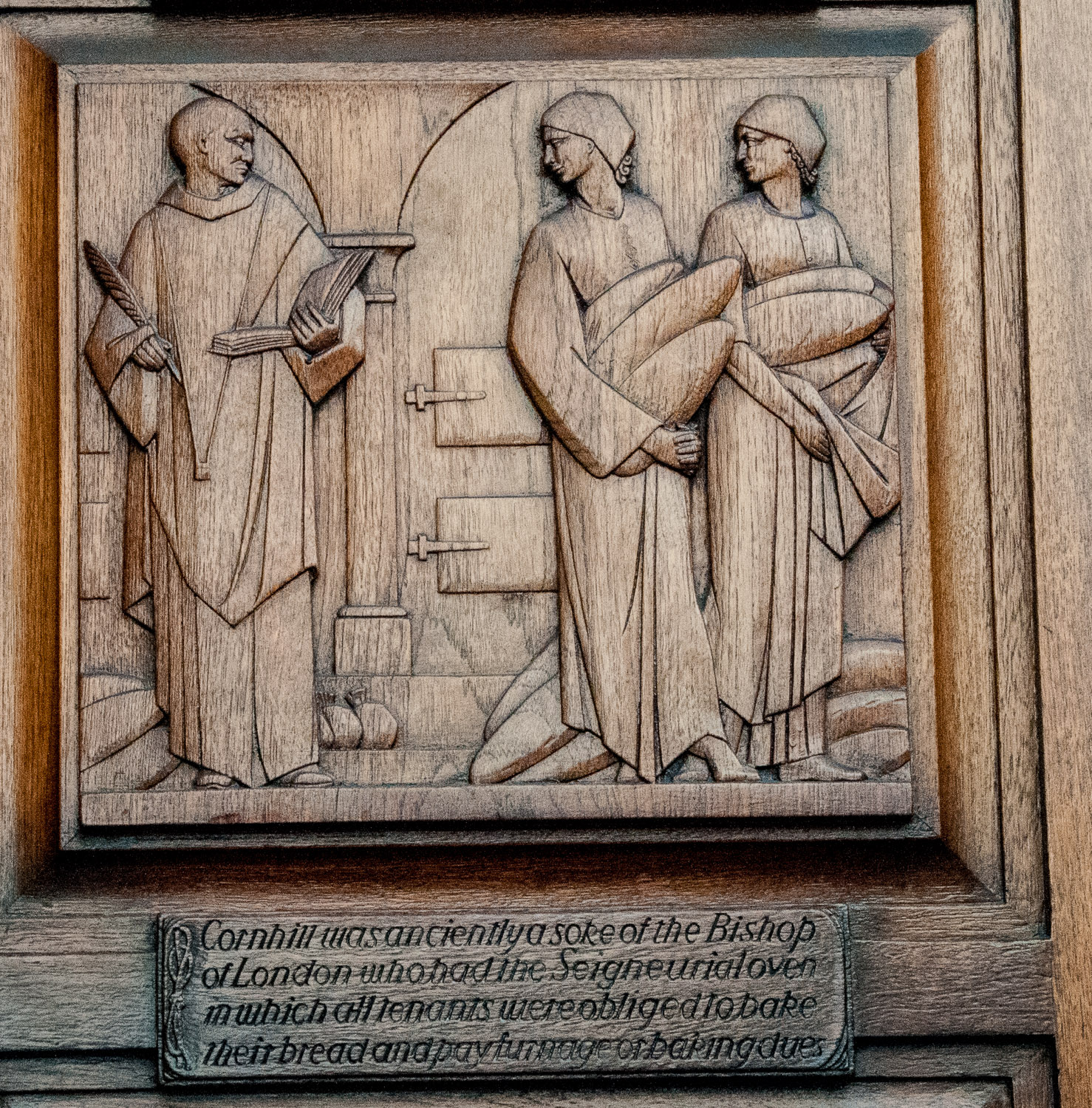 The explanation reads: ‘Cornhill was anciently a soke of the Bishop of London who had the Seigneurial oven in which all tenants were obliged to bake their bread and pay furnage or baking dues.‘ A soke was a right of jurisdiction and the women have just paid the priest and are carrying away their freshly baked bread – they certainly don’t look very happy about the arrangement. 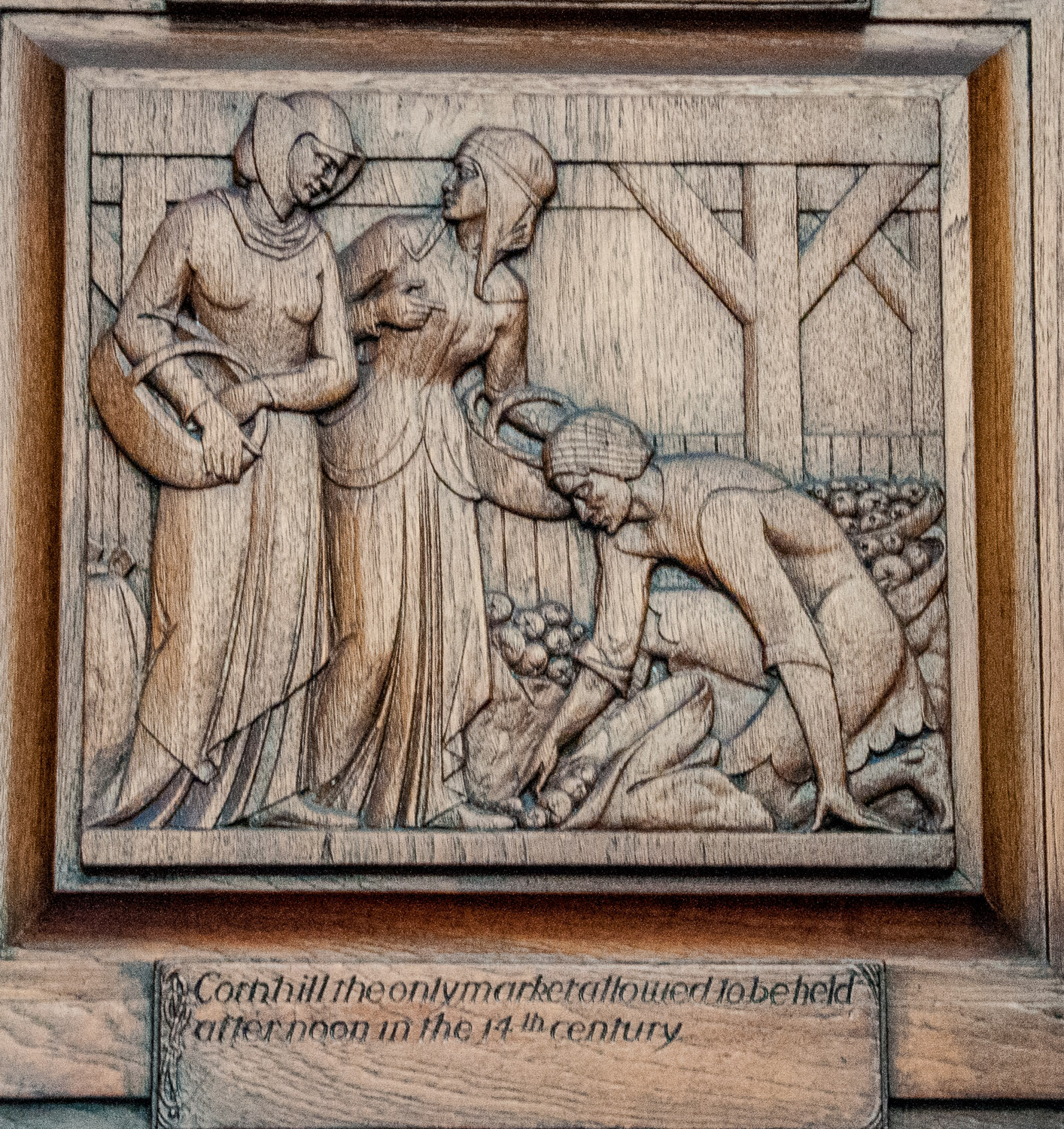 ‘Cornhill is the only market allowed to be held after noon in the 14th century’. A stallholder sells apples to two ladies. 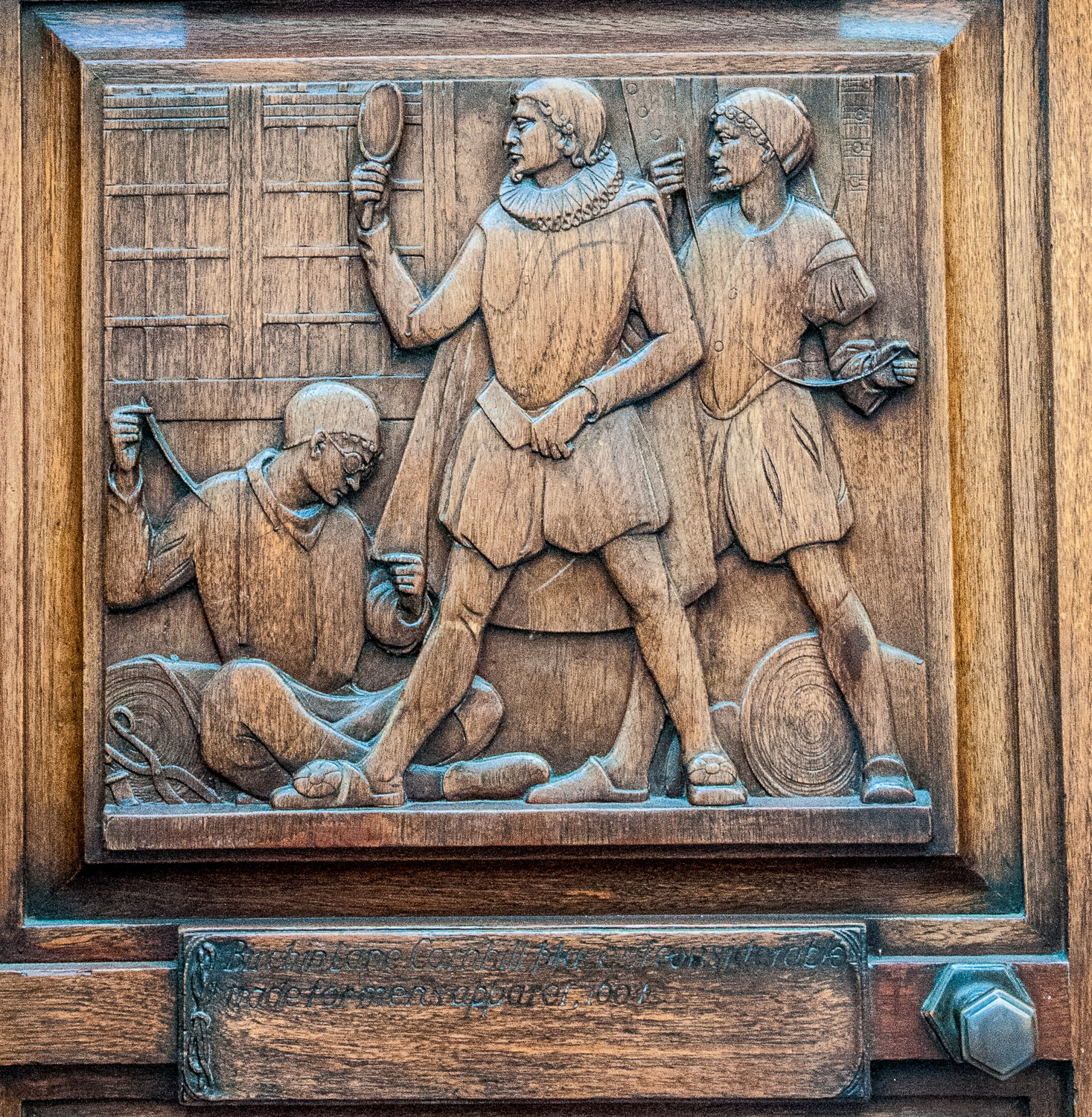 ‘Birchin Lane, Cornhill, place of considerable trade for men’s apparel, 1604‘. A tailor adjusts a gentleman’s hem, an assistant holds a tape measure, the gentleman admires himself in a mirror. Suits you, sir. 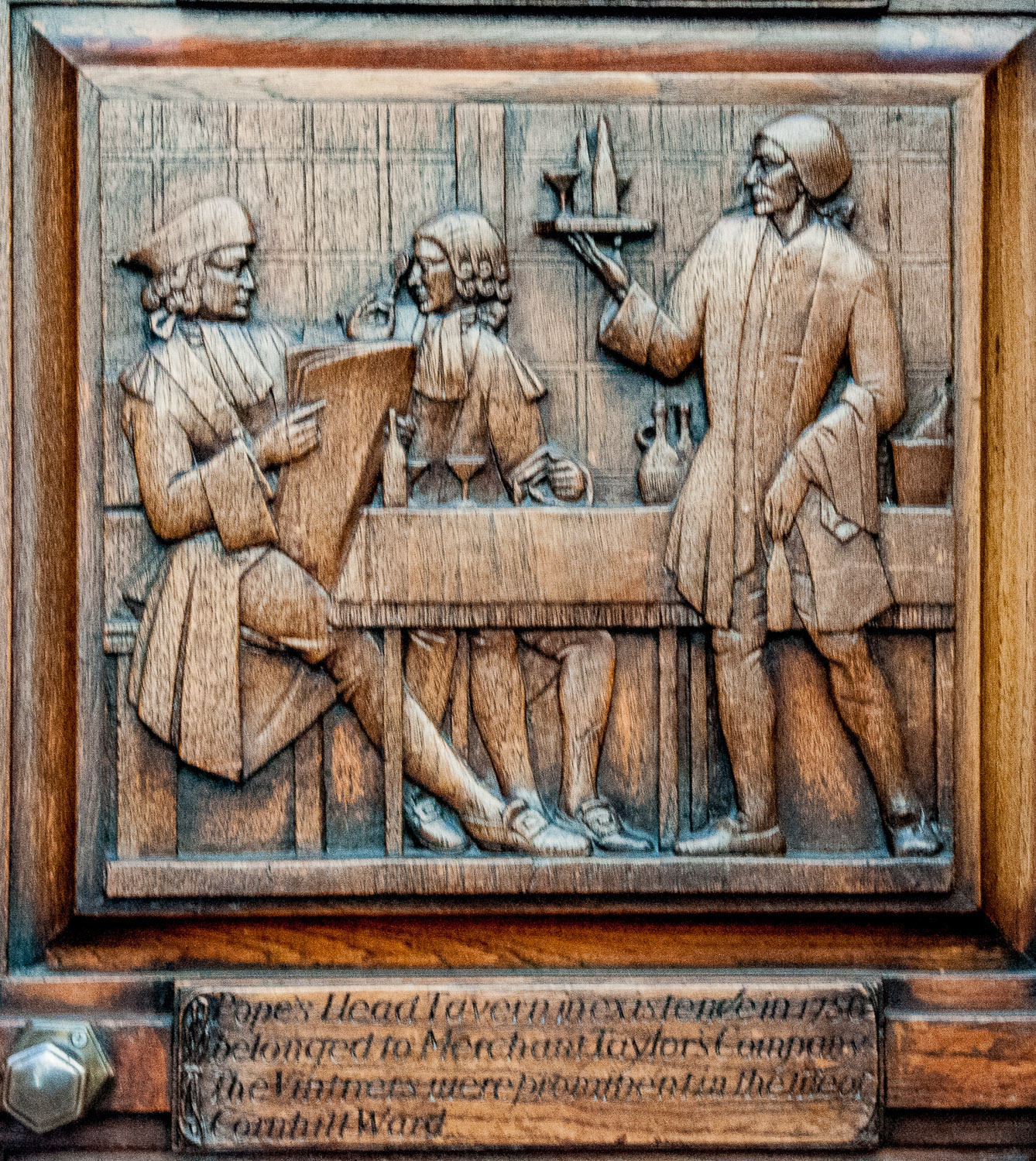 ‘Pope’s Head Tavern in existence in 1750 belonged to Merchant Taylor’s Company. The Vintners were prominent in the life of Cornhill Ward.‘ Nearby today is Pope’s Head Alley. 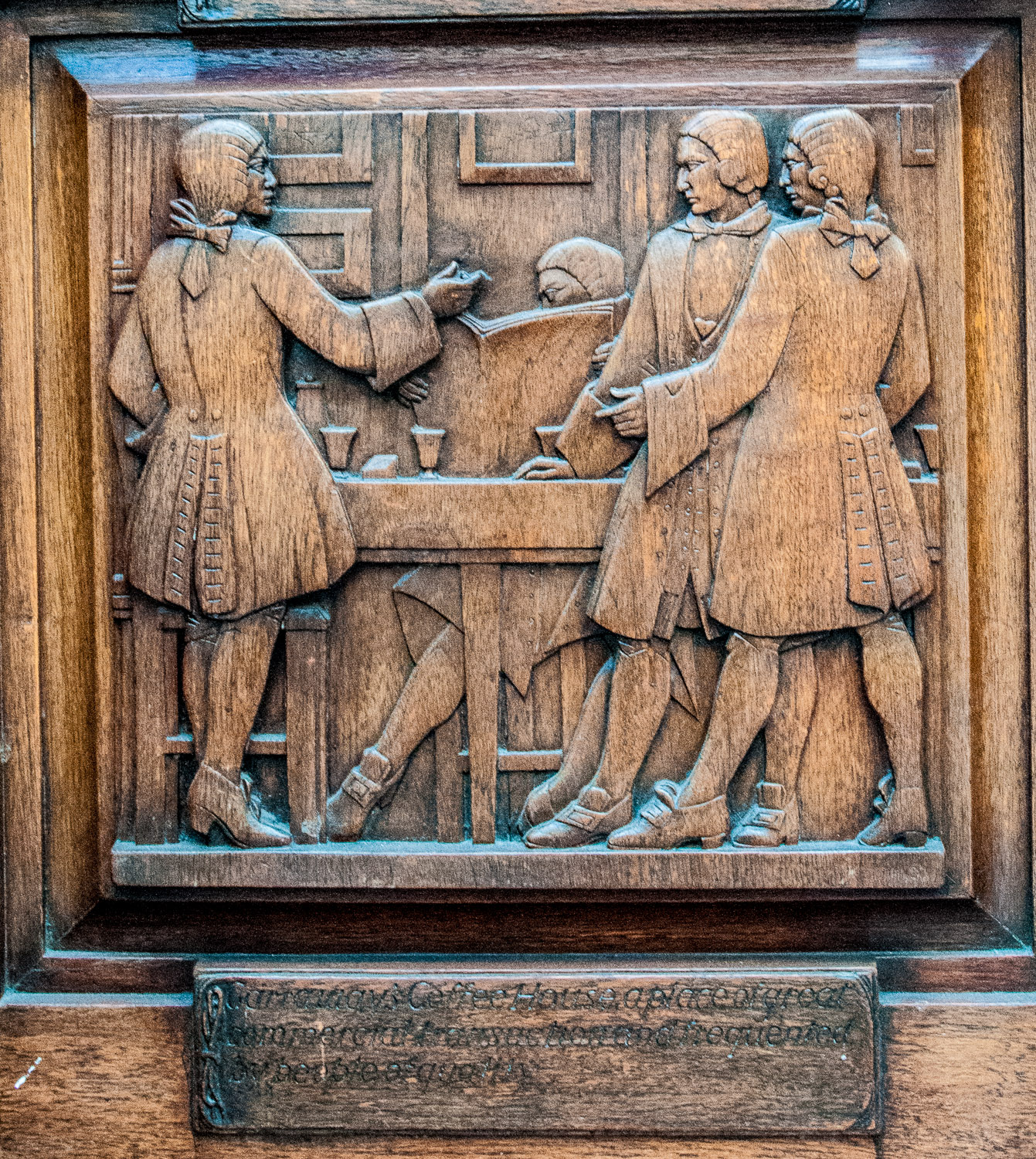 ‘Garraway’s Coffee House, a place of great commercial transaction and frequented by people of quality’. Garraway’s was nearby in Change Alley and is commemorated now with this plaque incorporating Sir Thomas Gresham’s grasshopper emblem. 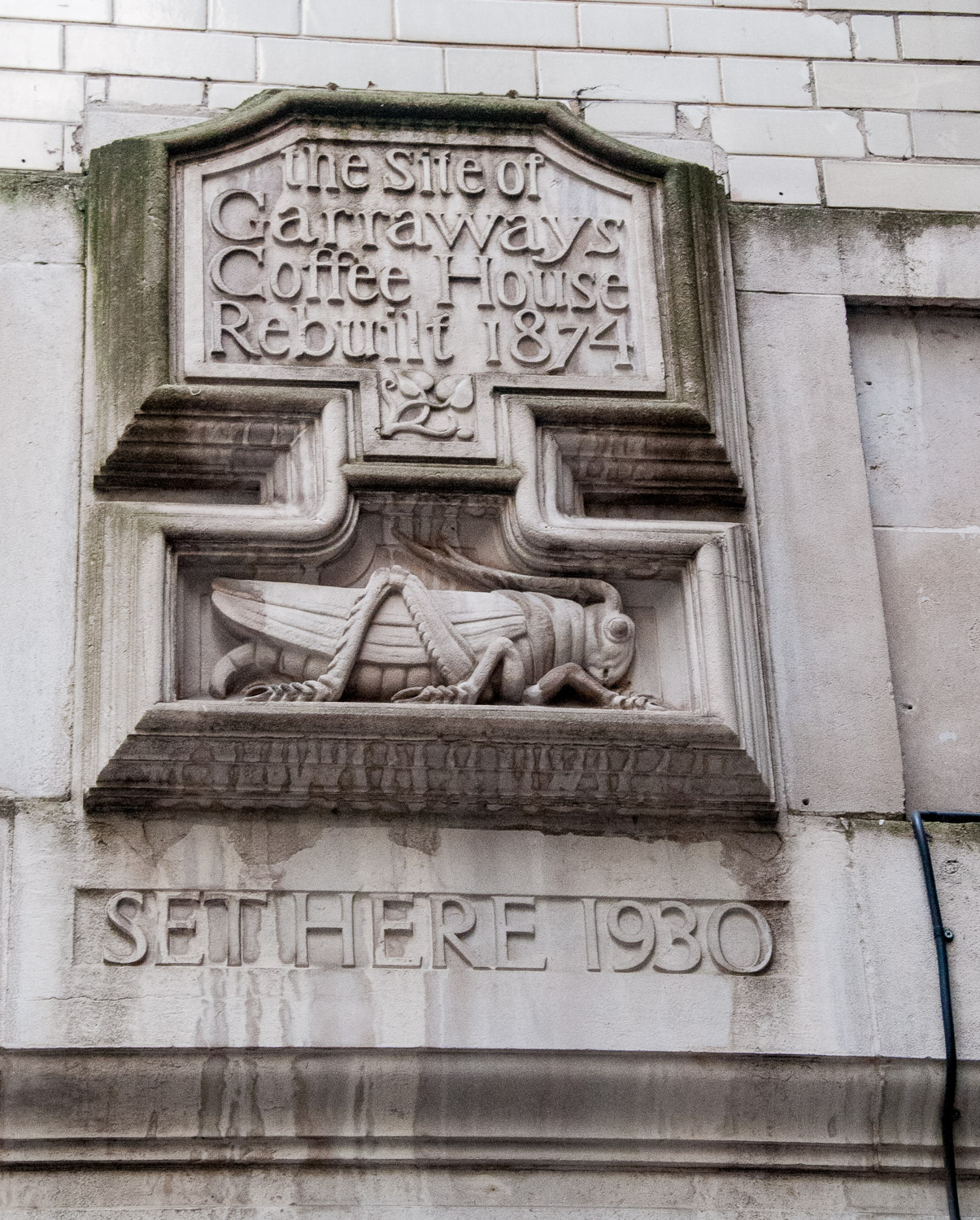 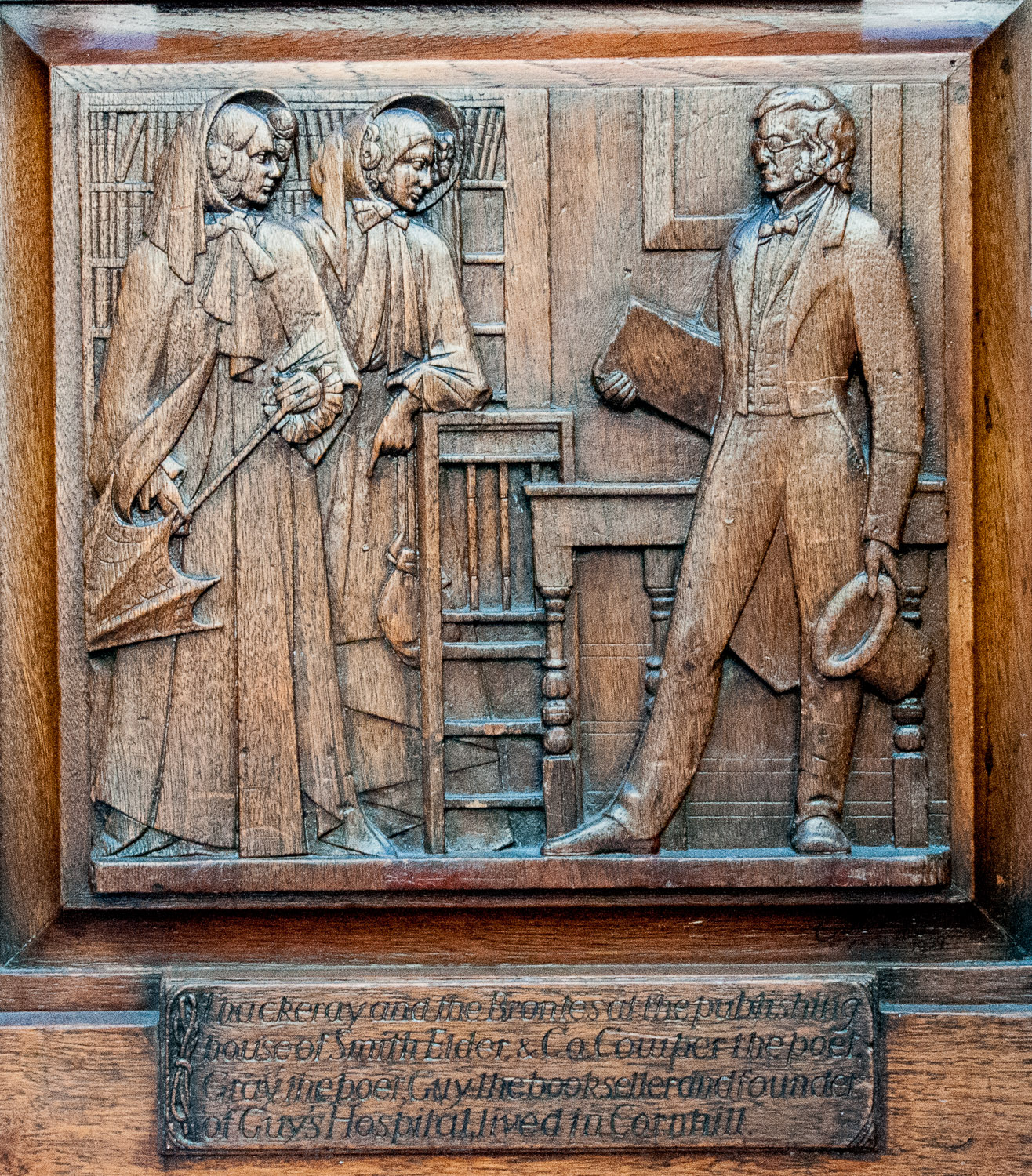 ‘Thackeray and the Brontes at the publishing house of Smith Elder & Co. Cowper, the poet, Gray the poet, Guy, the bookseller and founder of Guy’s Hospital, lived in Cornhill.’

The panel depicts Charlotte and Anne Bronte meeting with William Makepeace Thackeray at the premises of Smith Elder.

I hope you found the doors and their stories as fascinating as I did. These pictures were taken at the weekend but the doors open inwards, so you can still see them when the building is open.