A neat little book called City of London Safari by Helen Long was recommended to me by my friend Annetta and reading it inspired me to go out again and take more pictures of the many animals that inhabit the City.

My most pleasing discovery in the book was this little Scottish terrier called Chippy. He rests now in All Hallows by the Tower at the feet of his master the Reverend ‘Tubby’ Clayton CH MC who became vicar of the Church in 1922 and remained there until 1963.  He is best known for his work initially as an army chaplain during the First World War and in particular the establishment of Talbot House, a unique place of rest and sanctuary for British troops. After the war the spirit and intent of Talbot House became expressed through the Toc H movement. 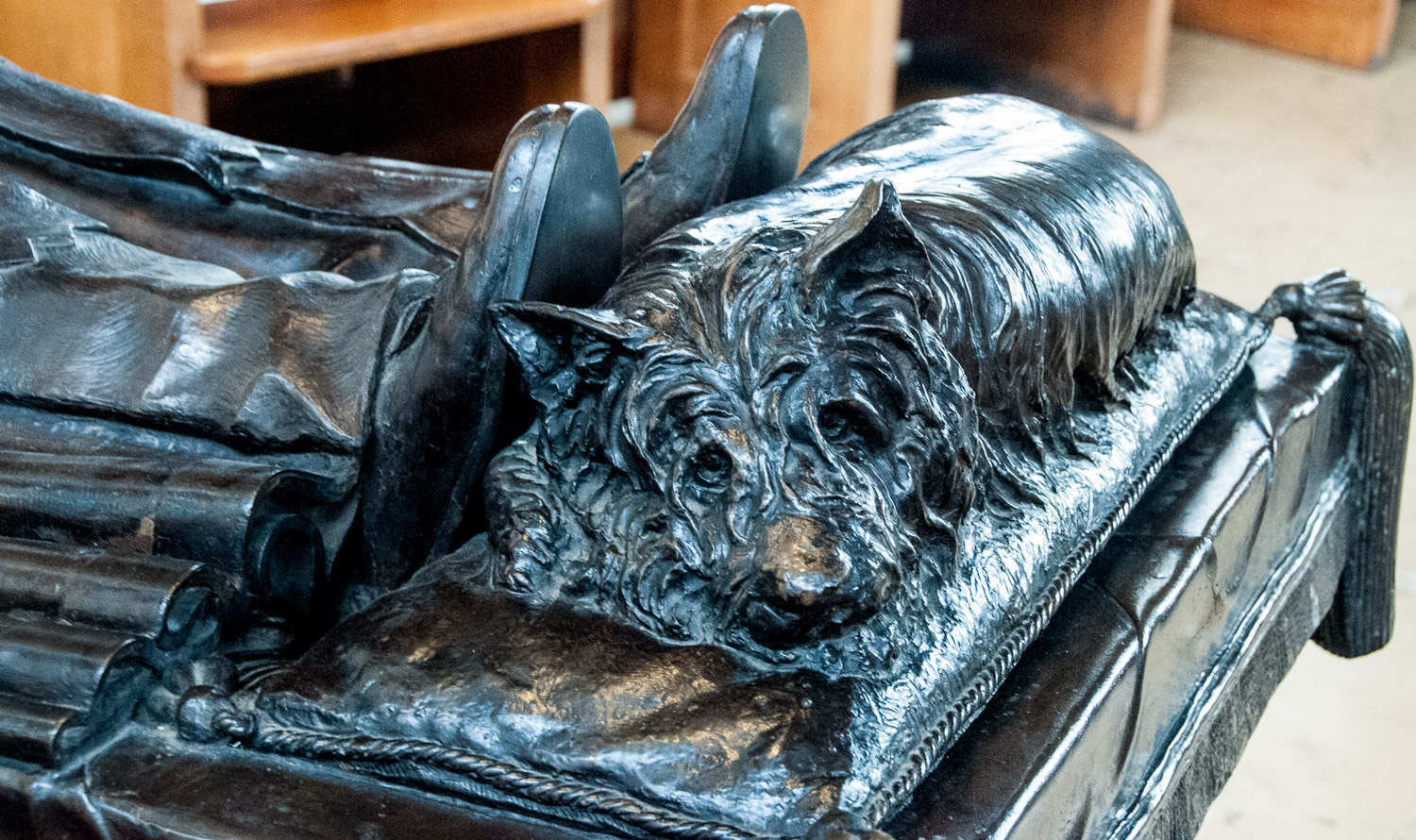 These one and a half times life-size bronzes are outside the headquarters of the London Underwriting Centre in Mincing Lane and the sculptor was Althea Wynne, who sadly died in 2012. She was a keen rider and her love of horses shows through clearly along with influences from classical art, especially Etruscan. There is also a deliberate reference to the classical horses in front of St Mark’s in Venice, whose wealth was also almost entirely built on trade.

Each horse stands 10ft high, weighs 4.5 tonnes and is shown pawing the ground. They are intended ‘to exemplify the dynamism and power of new City buildings …’ 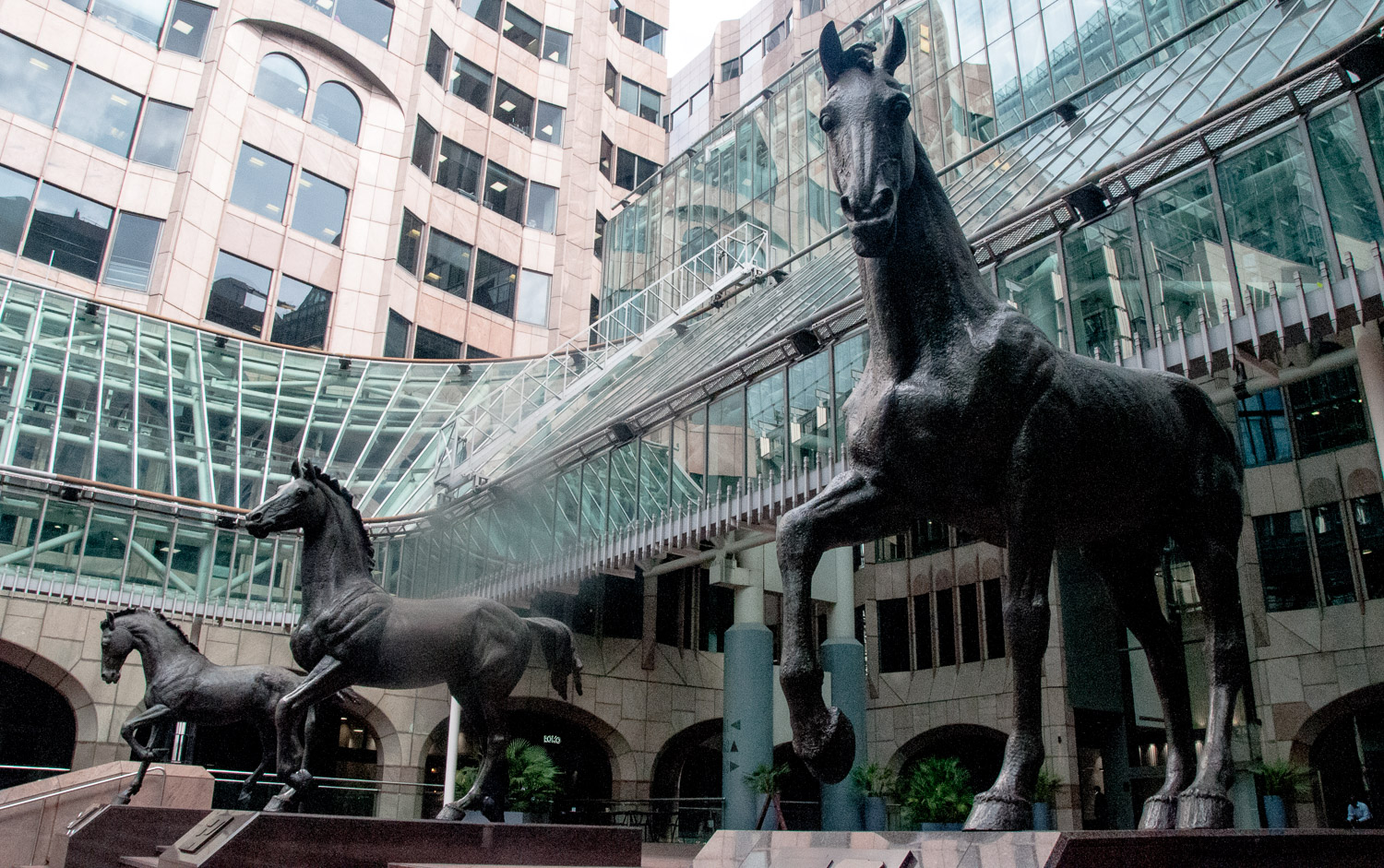 In typical City fashion they were swiftly nicknamed Sterling, Dollar and Yen

A ram stands proudly on the crest of the Clothworkers’ Company on the entrance to Dunster Court, Mincing Lane. 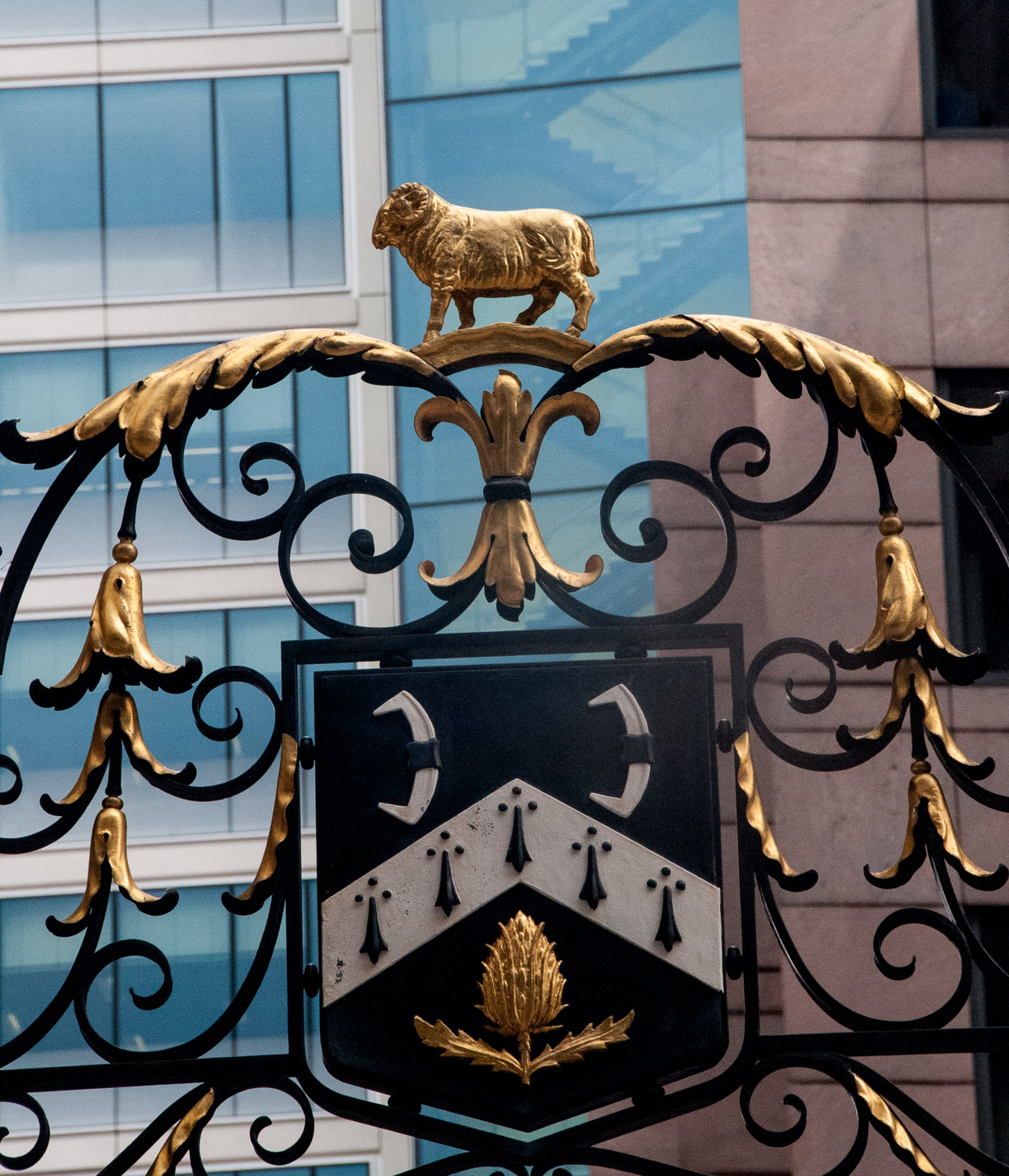 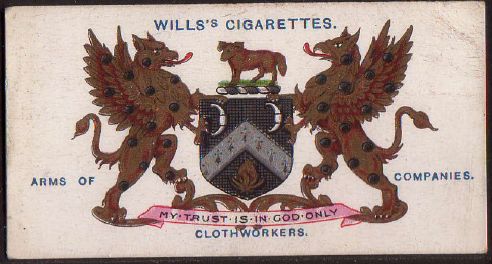 Once upon a time you could learn more about the City Livery Companies if you smoked Wills’s cigarettes!

Founded by Royal Charter in 1528, the original purpose of The Clothworkers’ Company was to protect its members and promote the craft of cloth-finishing within the City of London. Although few of their present members are involved in the textile industry in any direct way, the Company continues to support textiles, principally through educational grants, fostering the development of technical textiles and colour science, and support for the nation’s textile heritage.

As you approach the Bank junction from Cheapside look up and you will see two young boys at either end of the grand building that was once the City headquarters of Midland Bank (1935). The are both struggling with a rather angry looking Goose. 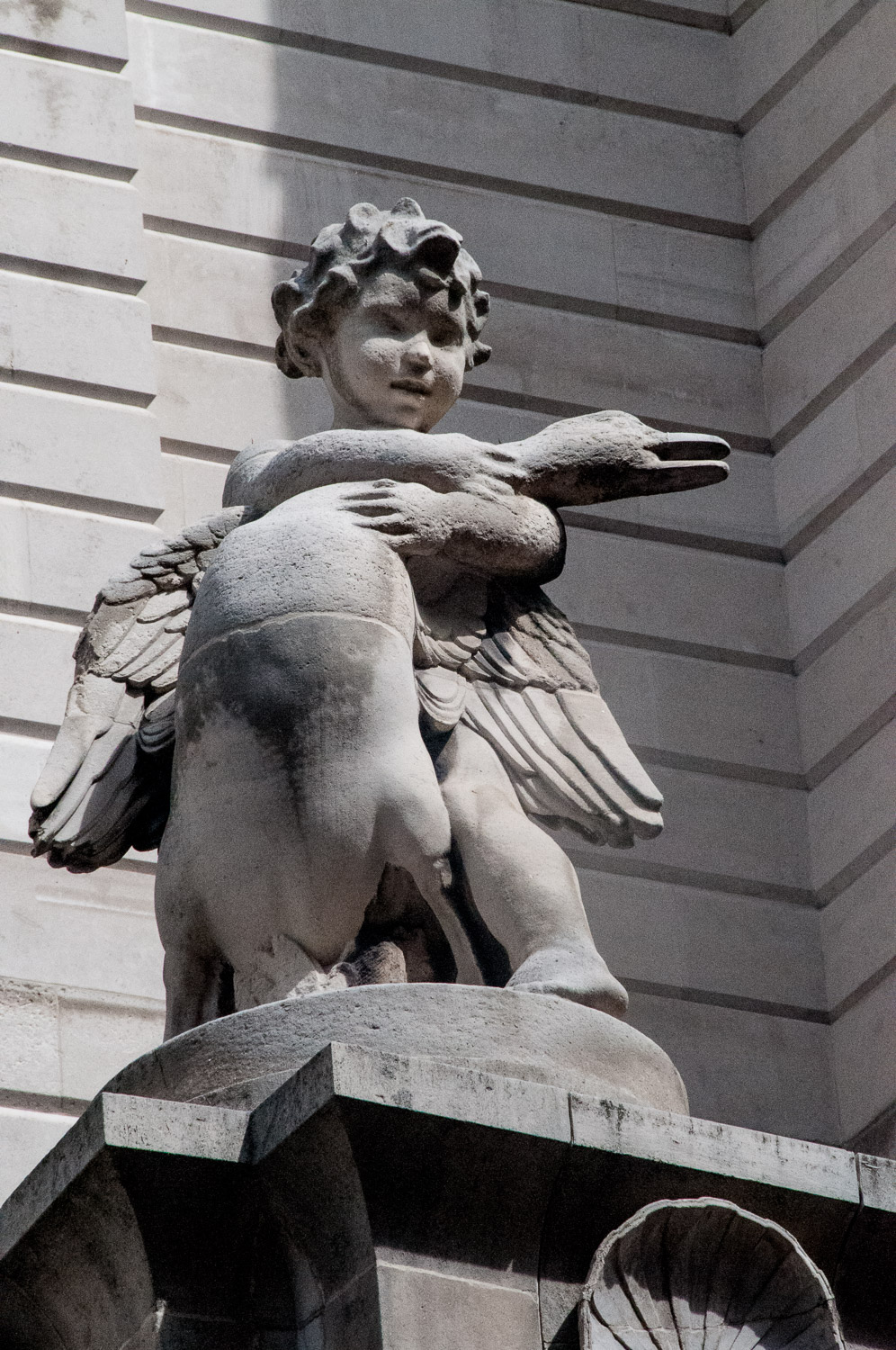 The sculptor was William Reid Dick

Why a goose? A clue is the ancient name of the street and the goose was a suggestion by the architect Sir Edwin Lutyens to commemorate its original market function. The building is now a private club and restaurant, called The Ned in Sir Edwin’s honour. 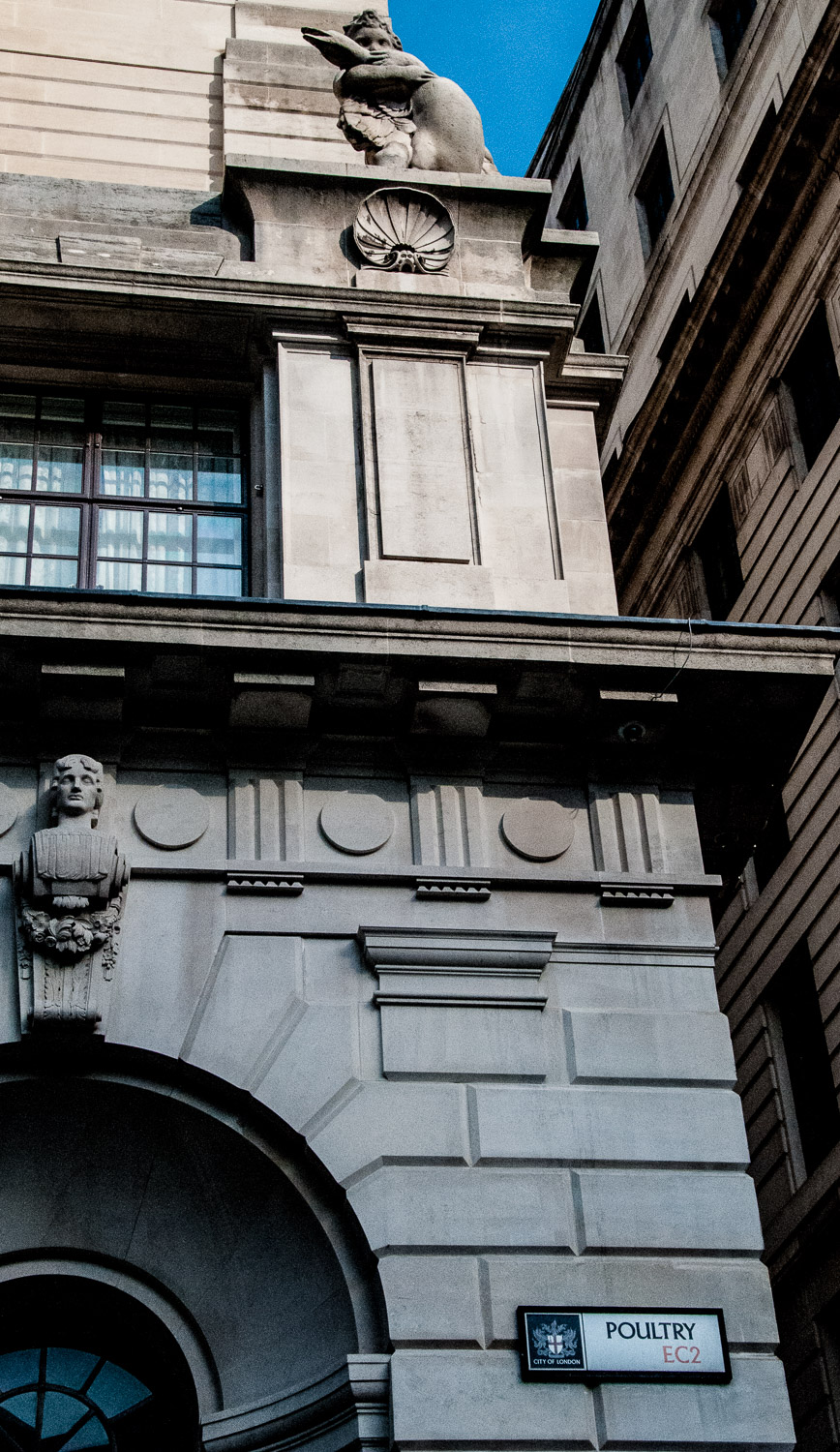 The name of the street is a clue

The Church of St Katherine Cree in Leadenhall Street, one of the few to almost totally survive the Great Fire and the Blitz, has a rooster on its weathervane. 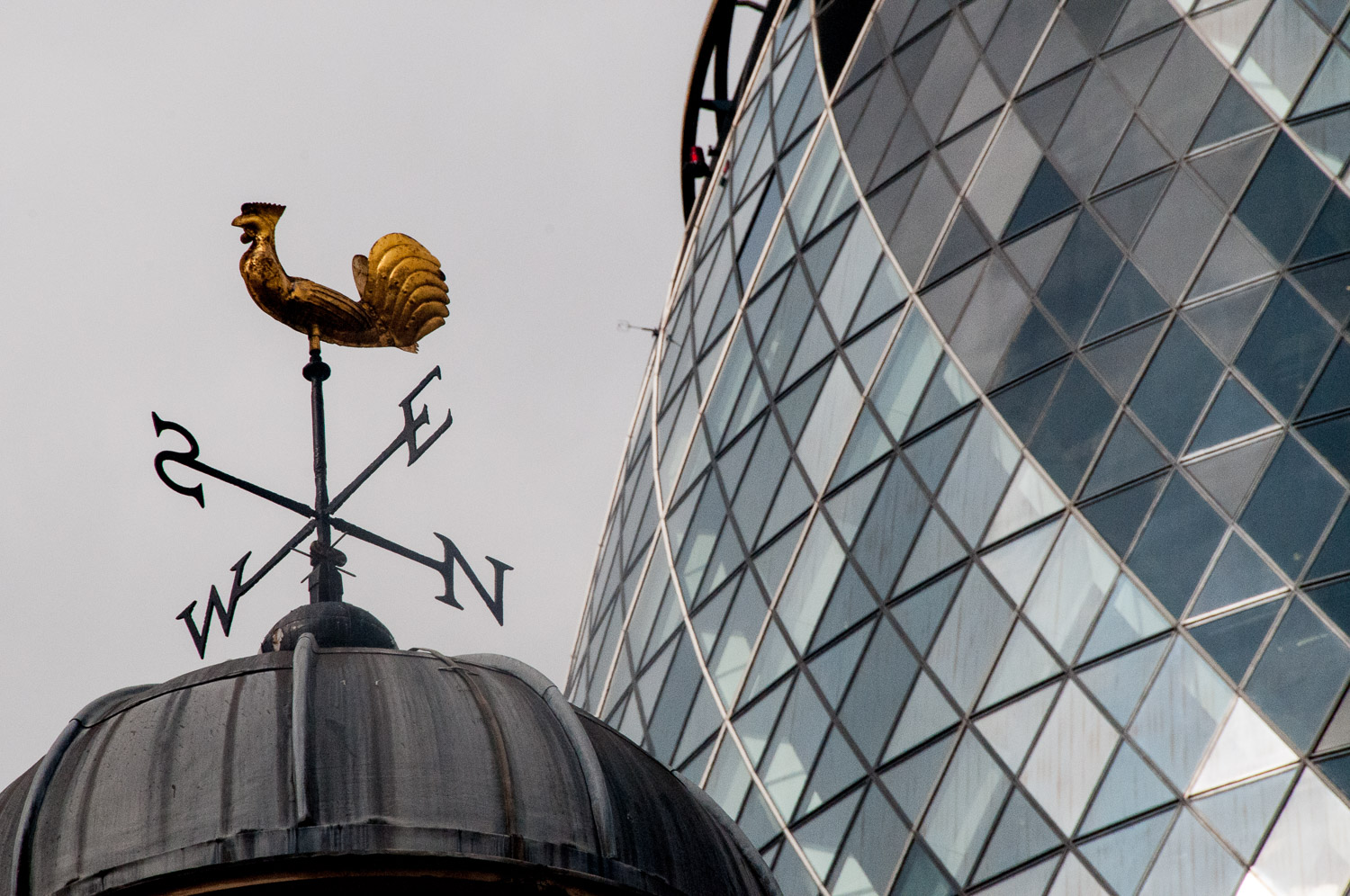 The St Katherine Cree weathercock with The Gherkin in the background

The Bible tells the story of St Peter denying Christ three times ‘before the cock crowed’. In the late 6th Century Pope Gregory I declared the rooster to be the emblem of St Peter and also of Christianity generally. Later, in the 9th Century, Pope Nicholas decreed that all churches should display it and, although the practice gradually faded away, the tradition of rooster weathervanes survived in may places.

The Agnus Dei, or Lamb of God, is the adopted emblem of the Middle Temple and can be seen in many places around the Inn. 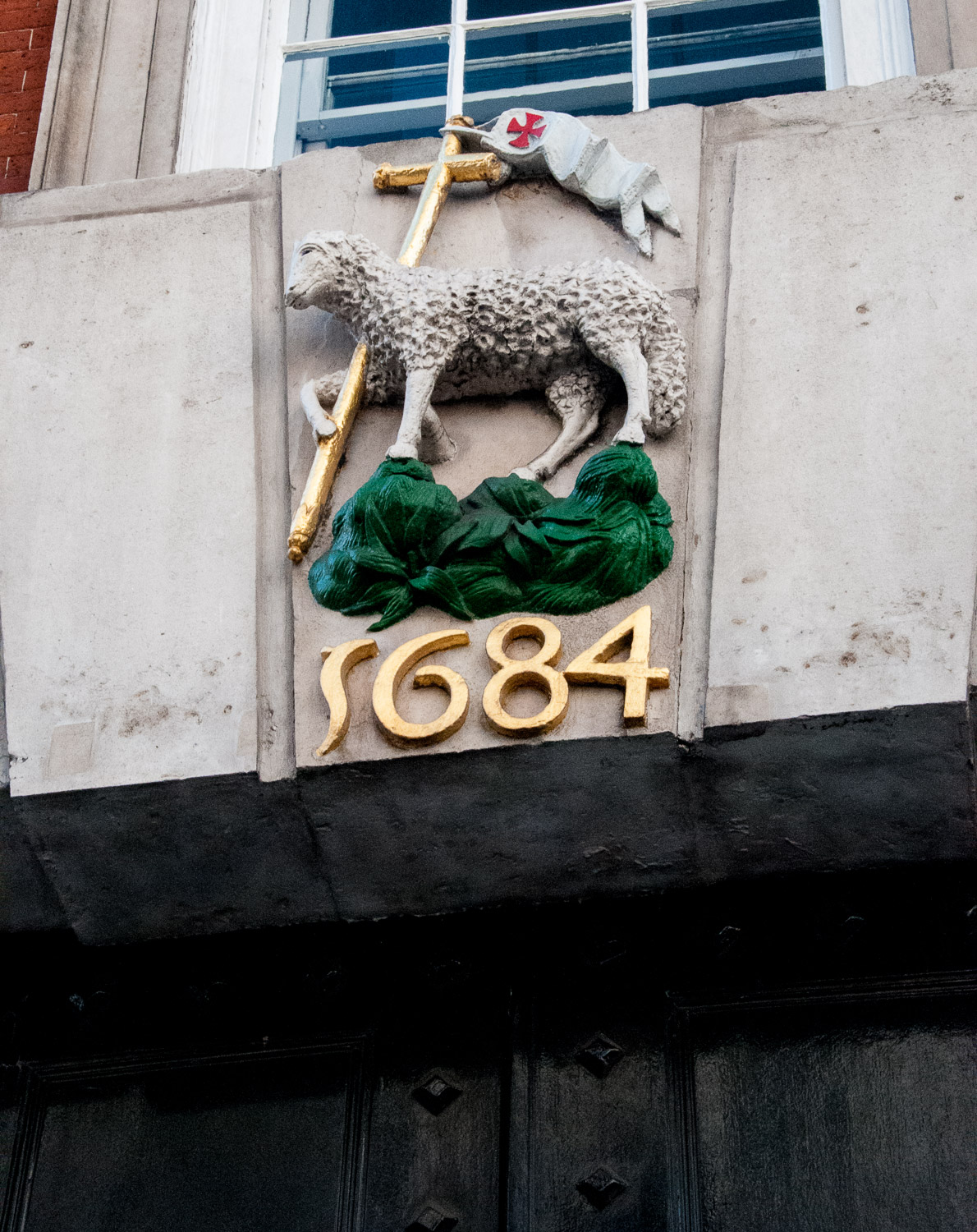 Lamb and Flag keystone, Fleet Street entrance to the Middle Temple (notwithstanding the date, the precision suggests it has been substantially recut over time)

There is a theory that the holy lamb was chosen as the emblem because it had originally been used by the Knights Templar whose arms were two knights mounted on one horse with a trotting Agnus Dei. 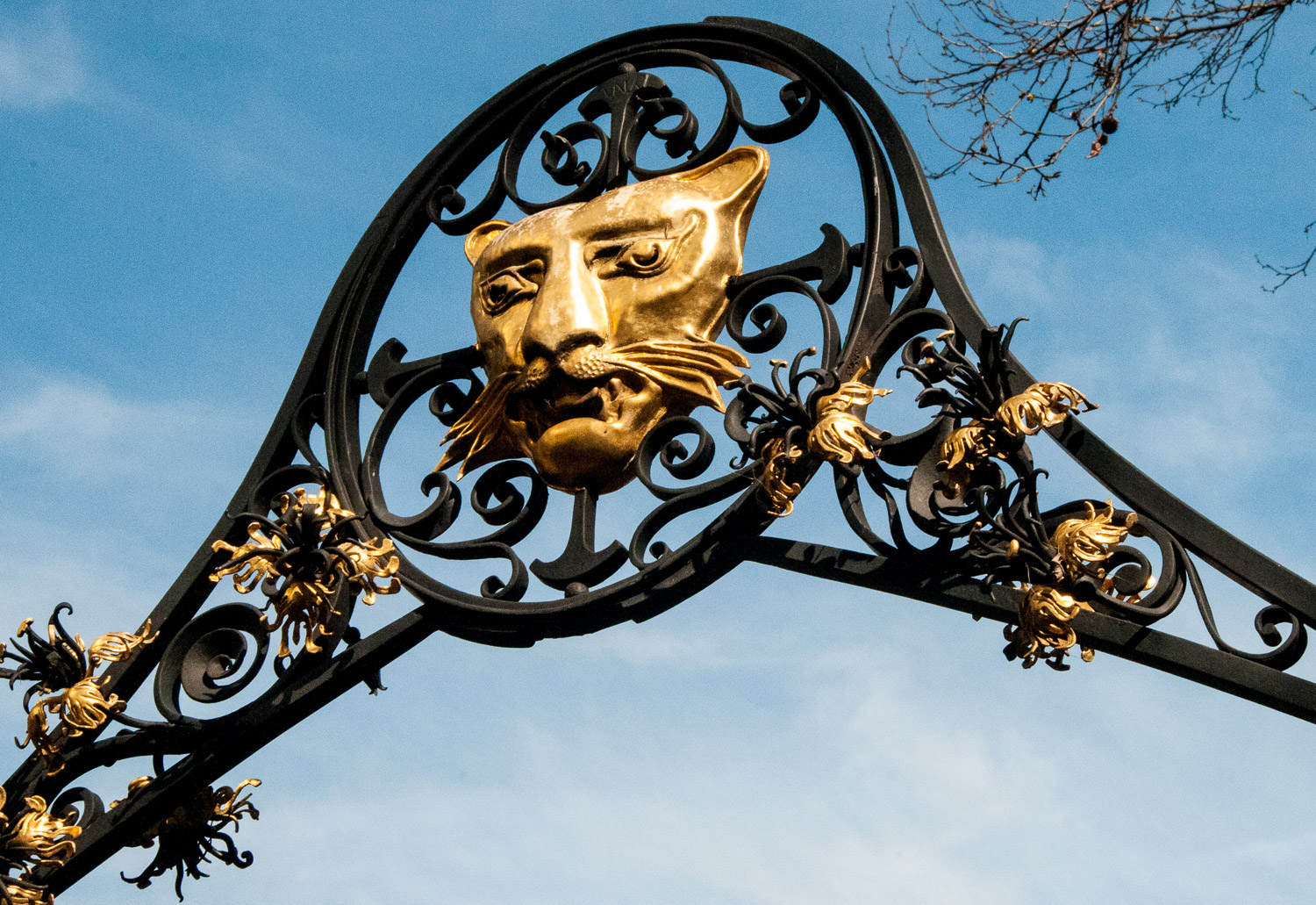 The St John Zachary garden is on the site of the former churchyard and church of St John Zachary, which was partly destroyed in the Great Fire. In 1339 the Worshipful Company of Goldsmiths had acquired land here and built the earliest recorded livery hall on this site. The present multi-level garden includes mature trees, benches, lawn and a fountain.

A wise owl gazes at the commuters as they trek over London Bridge from his perch on the House of Fraser store opposite the north entrance to the bridge. 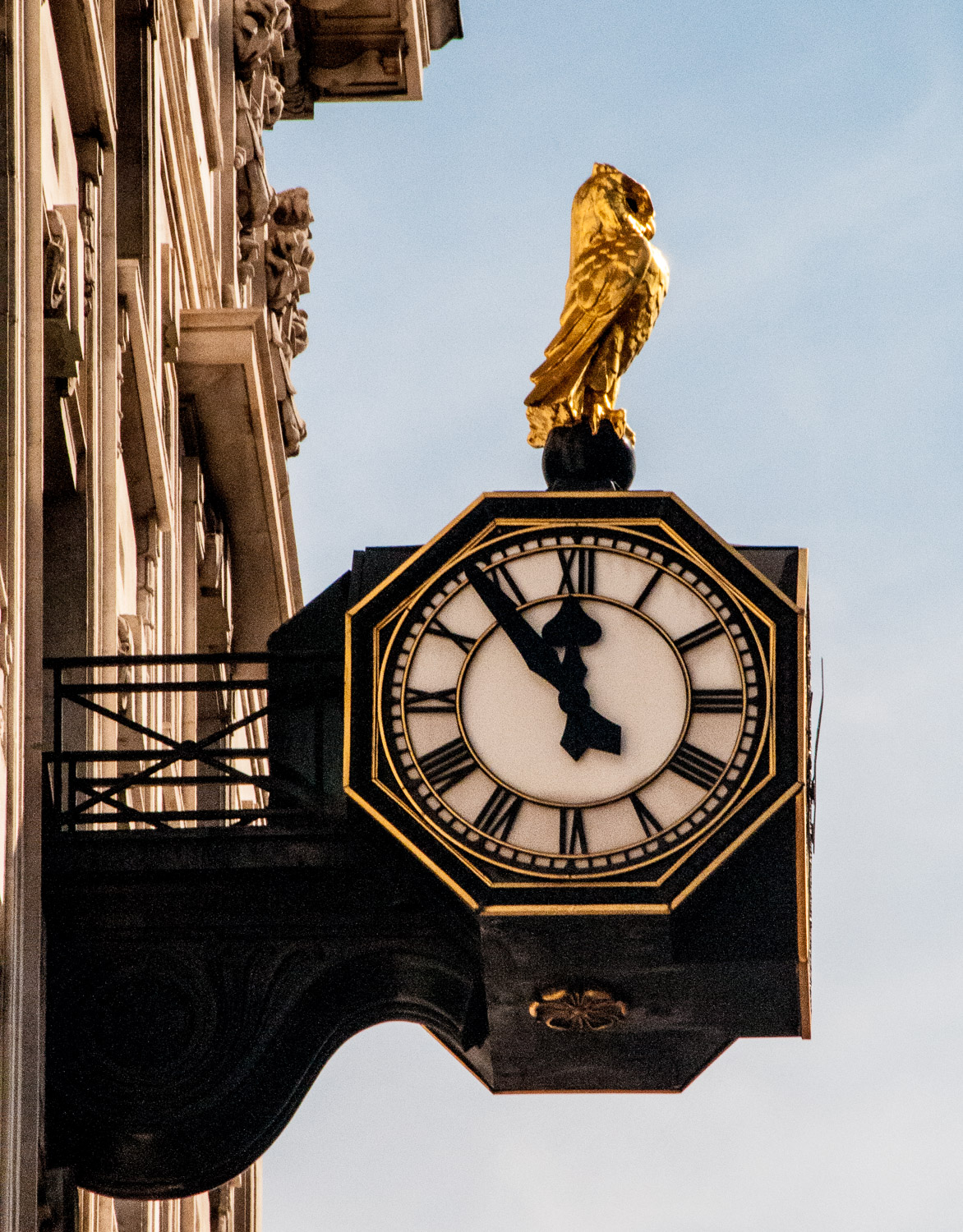 And finally, a wily fox decorates the door of the old Fox’s umbrella shop on London Wall. 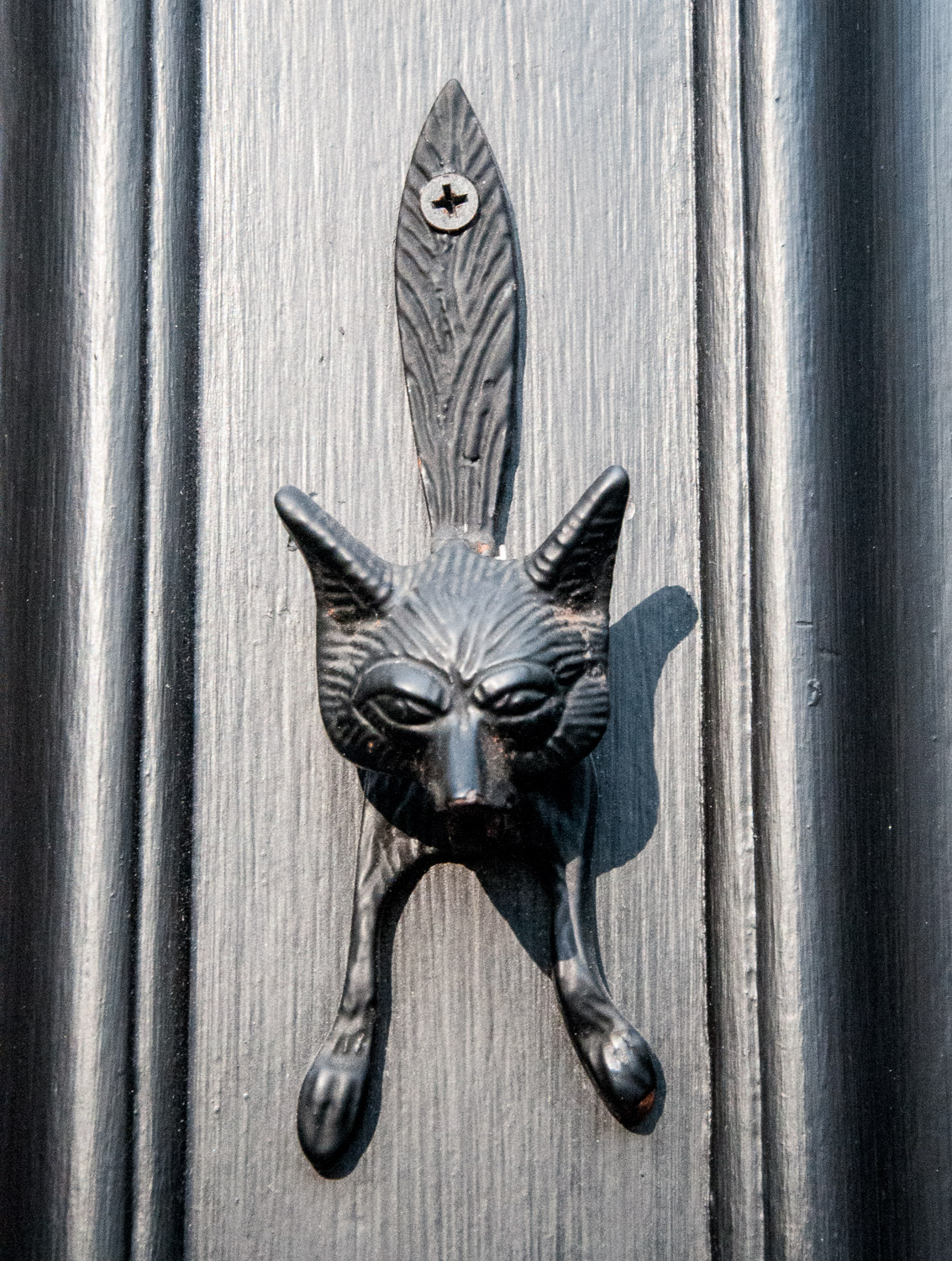