Last Saturday I headed off to St Bartholomew the Great in Smithfield, my intention being to take a photograph of the founder Rahere’s tomb for a future blog I am planning. I hadn’t been there for at least five years and was very happy to pay the entry fee and enjoy the church as virtually the only visitor. When I entered the south transept, however, what I saw literally stopped me in my tracks. Here is a picture … 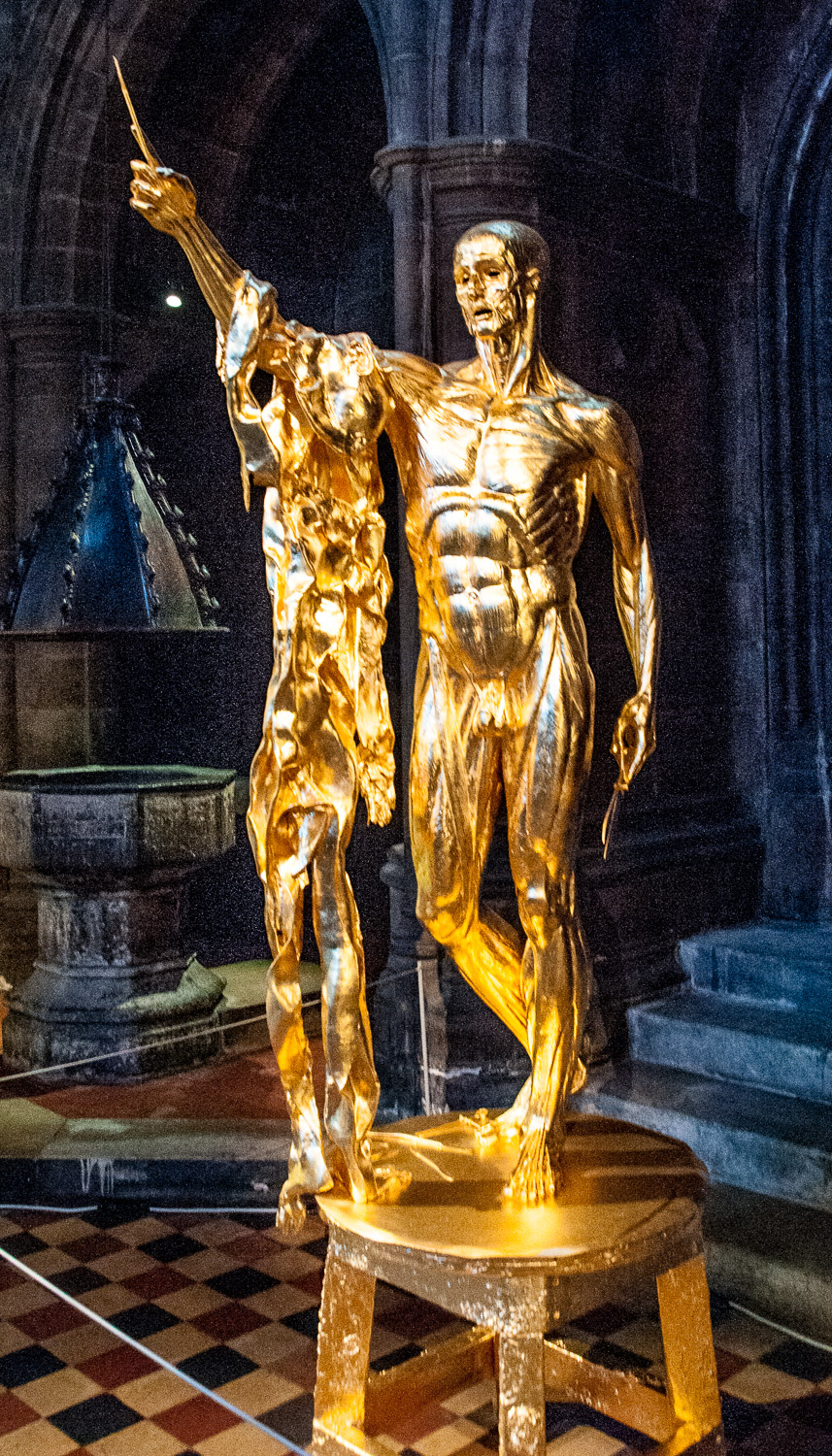 A naked St Bartholomew holds out his flayed skin

Entitled Exquisite Pain, as well as his skin St Bartholomew also holds a scalpel in one hand and a pair of scissors in the other. The second surprise, to me anyway, was that this work was by Damien Hirst, the modern artist known particularly for his spot paintings and the shark swimming in formaldehyde. St Bartholomew is the patron saint of Doctors and Surgeons and Hirst has said that this 2006 work ‘acts as a reminder that the strict demarcation between art, religion and science is a relatively recent development and that depictions of Saint Bartholomew were often used by medics to aid in anatomy studies’. He went on to say that the scissors were inspired by Tim Burton’s film ‘Edward Scissorhands’ (1990) to imply that ‘his exposure and pain is seemingly self- inflicted. It’s kind of beautiful yet tragic’. The work is on long-term loan from the artist. Incidentally, just behind it in the photograph you will see the rare pre-Reformation font (1406) in which William Hogarth was baptised on 28 November 1697. 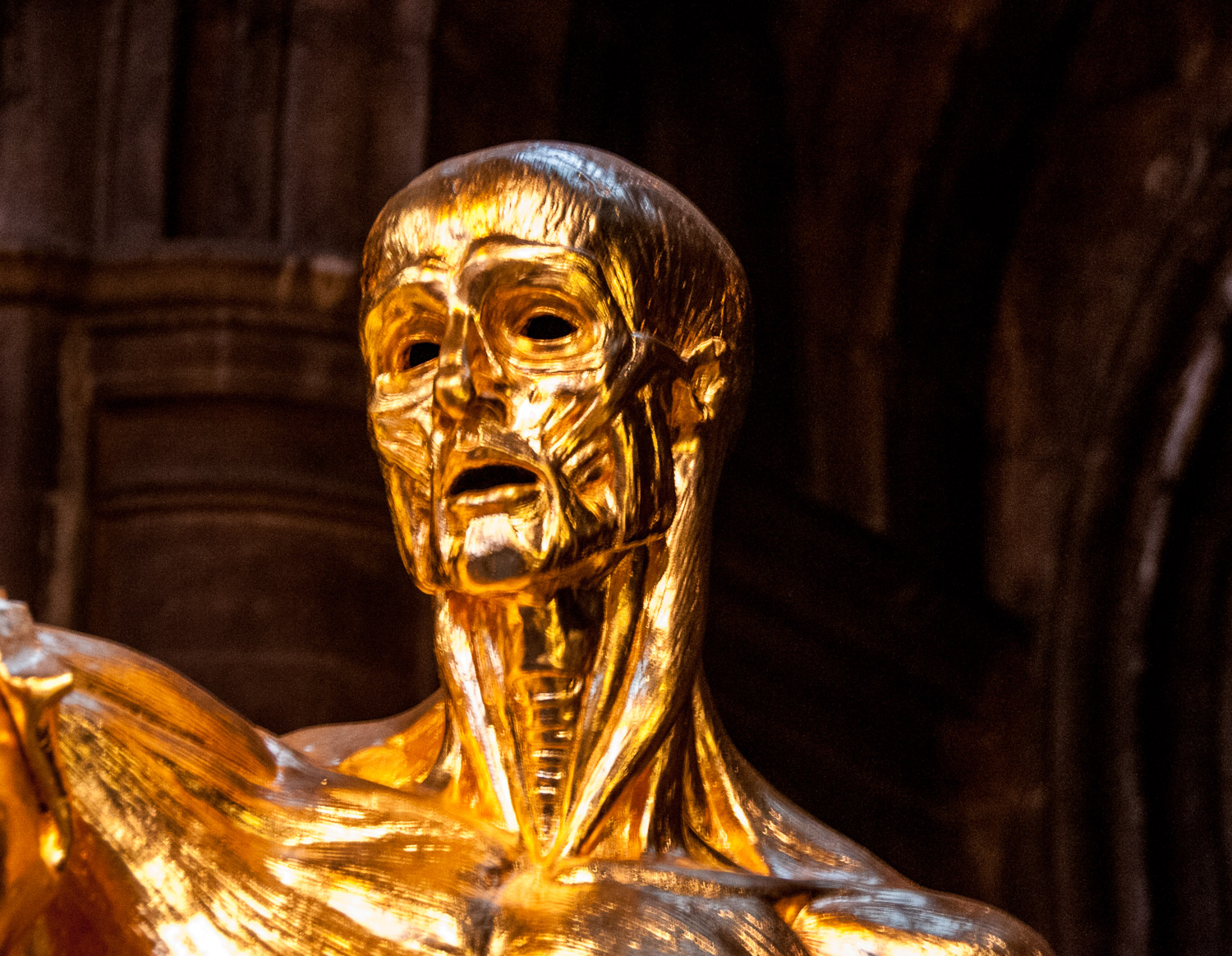 The quite extraordinary anatomical detail

I did eventually take a picture of Rahere’s tomb, here it is … 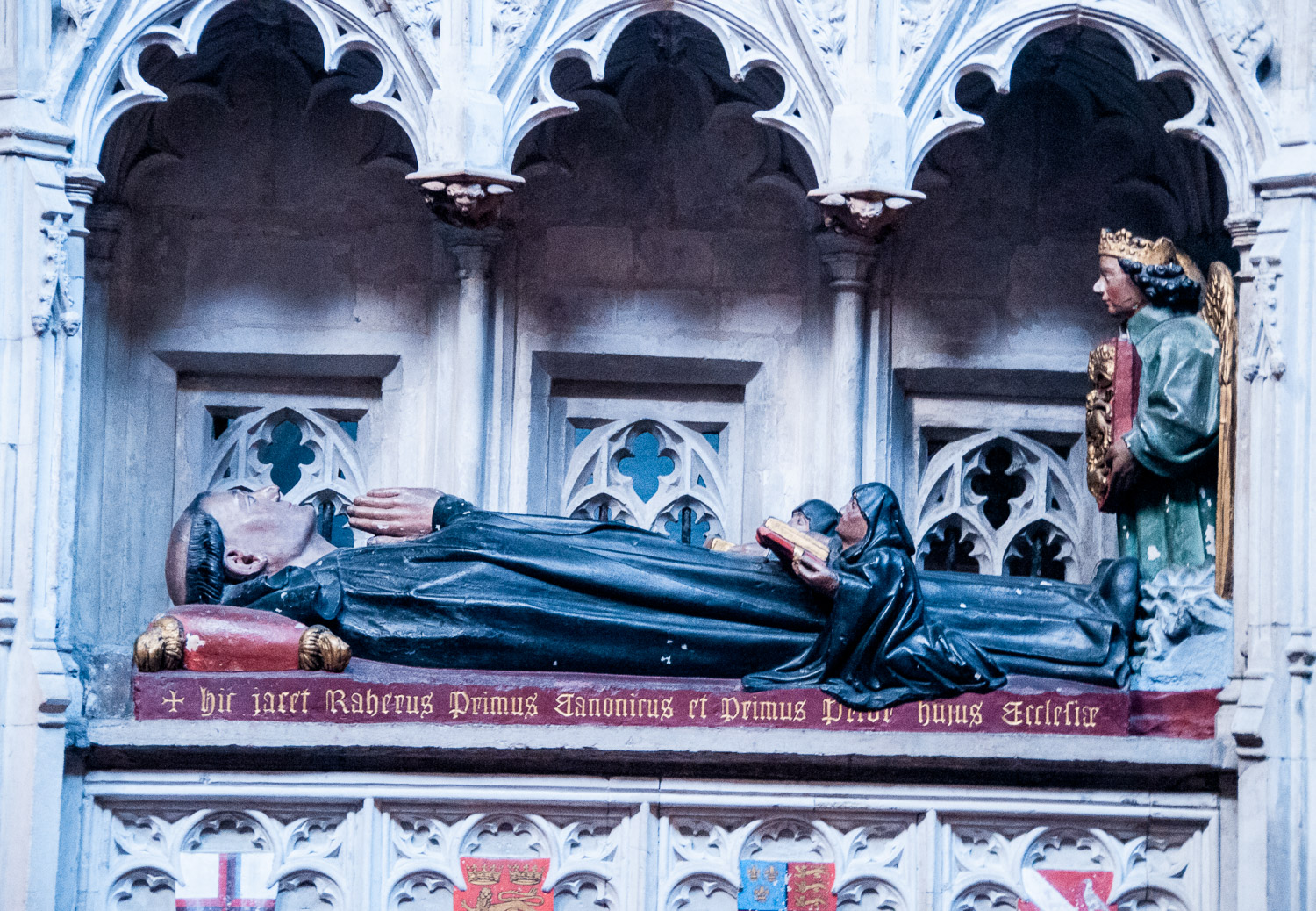 It still contains his remains and I shall write more about it in a future blog.

Under the oriel window there is a nice example of a rebus, in this case a representation of a person’s name using a picture. Here Prior Bolton’s name is neatly implied by a crossbow bolt piercing a tun (a type of cask). Bolton was Prior of St Bartholomew the Great between 1505 and 1532 and carried out repair and construction work across the church. 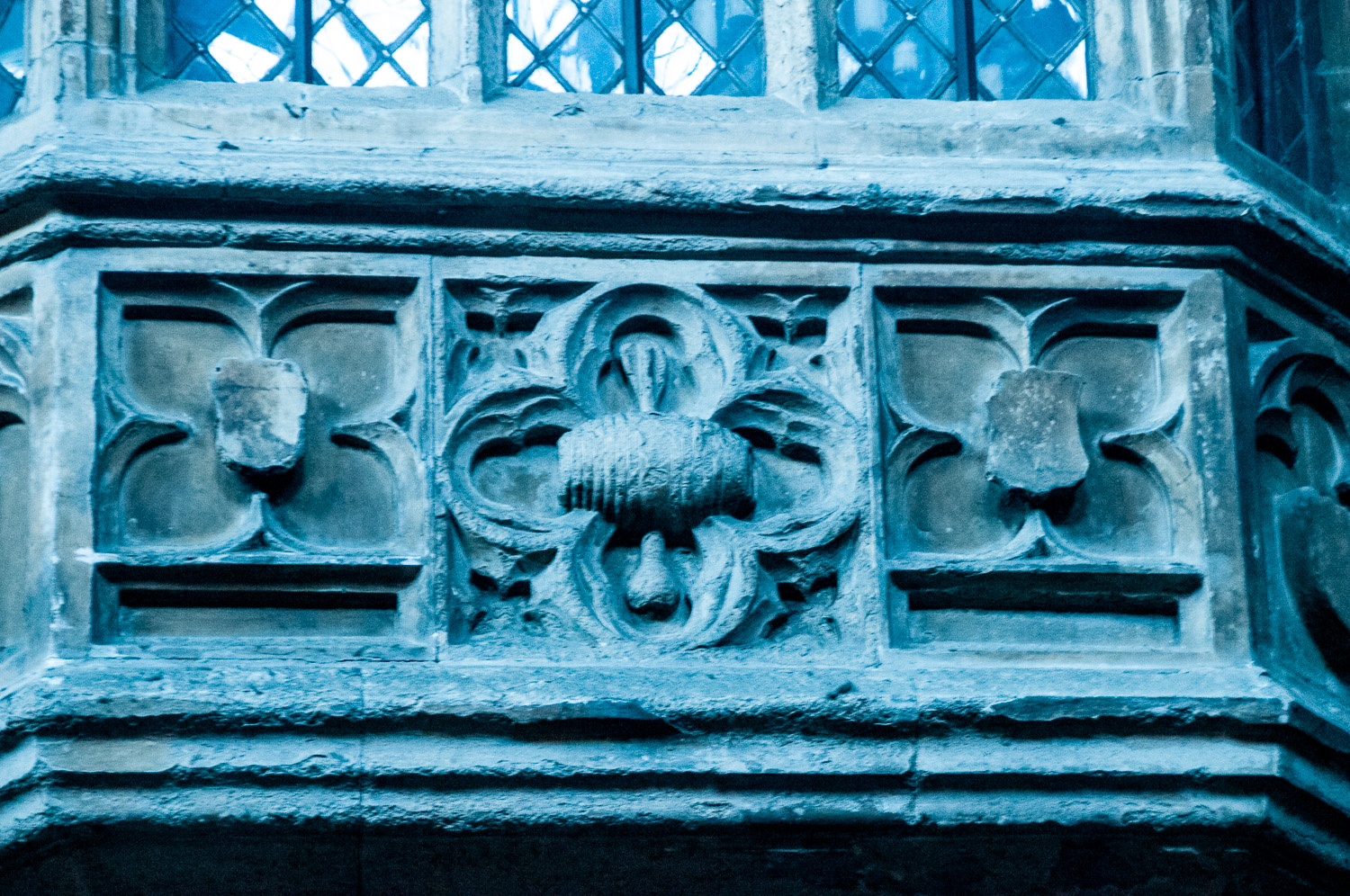 St Bride’s Fleet Street was gutted in the Blitz but was very sympathetically restored and reopened in 1957. It is famous for its wedding cake steeple and journalistic connections going back to the origins of the printing press itself. Today, however, I am going to talk about my visit to the small museum in the Crypt which is open when the church is and free to enter (and in a way there is a continuing theme of anatomical studies).

Until well into the 18th century the only source of corpses for medical research was the public hangman and supply was never enough to satisfy demand. As a result, a market arose to satisfy the needs of medical students and doctors and this was filled by the activities of the so-called ‘resurrection men’ or ‘body snatchers’. Some churches built watchtowers for guards to protect the churchyard, but these were by no means always effective – earning between £8 and £14 a body, the snatchers had plenty of cash available for bribery purposes.

One answer was a coffin that would be extremely difficult to open and such an invention was patented by one Edward Bridgman of Goswell Road in 1818. It was made of iron with spring clips on the lid and the coffin below fulfils the patent … 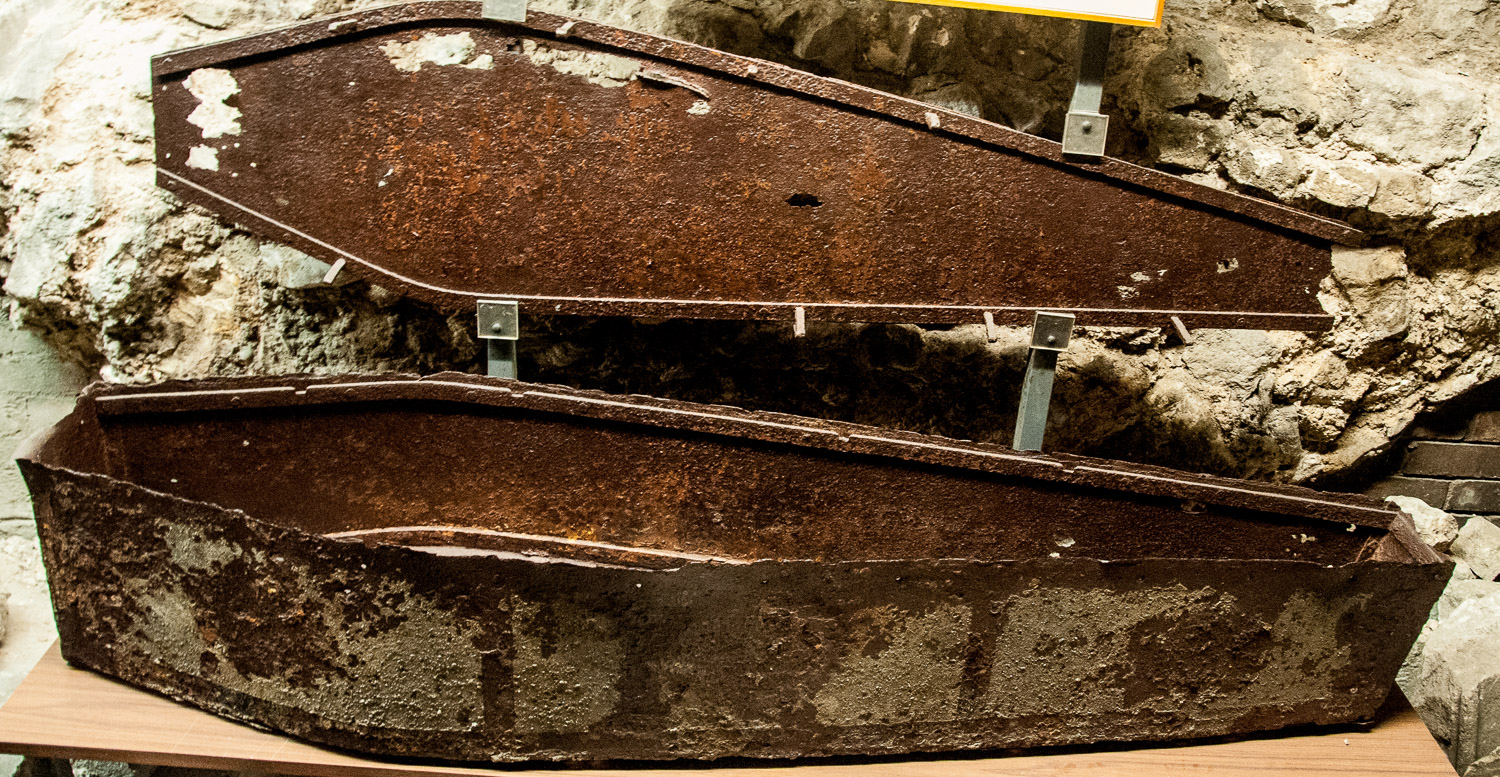 Iron coffin on display in the Crypt

The coffins were expensive, price depending upon the size required and the corresponding weight. An advertisement from the time is on display …

As a nearby information panel points out, the idea was not popular with the clergy and in 1820 the churchwardens at St Andrew’s Holborn refused churchyard burial to an iron coffin. The body was taken out and buried, which led to a law suit. The judgment was that such coffins could not be refused but, since they took so much longer than wooden ones to disintegrate, much higher fees could be charged. This no doubt contributed to the relatively short time iron coffining was used.

St Dunstan-in-the-West is the custodian of a very famous character after whom Ludgate itself is said to be named – but he is tucked away around the corner in the churchyard and you have to seek him out. It is, of course, the great King Lud himself … 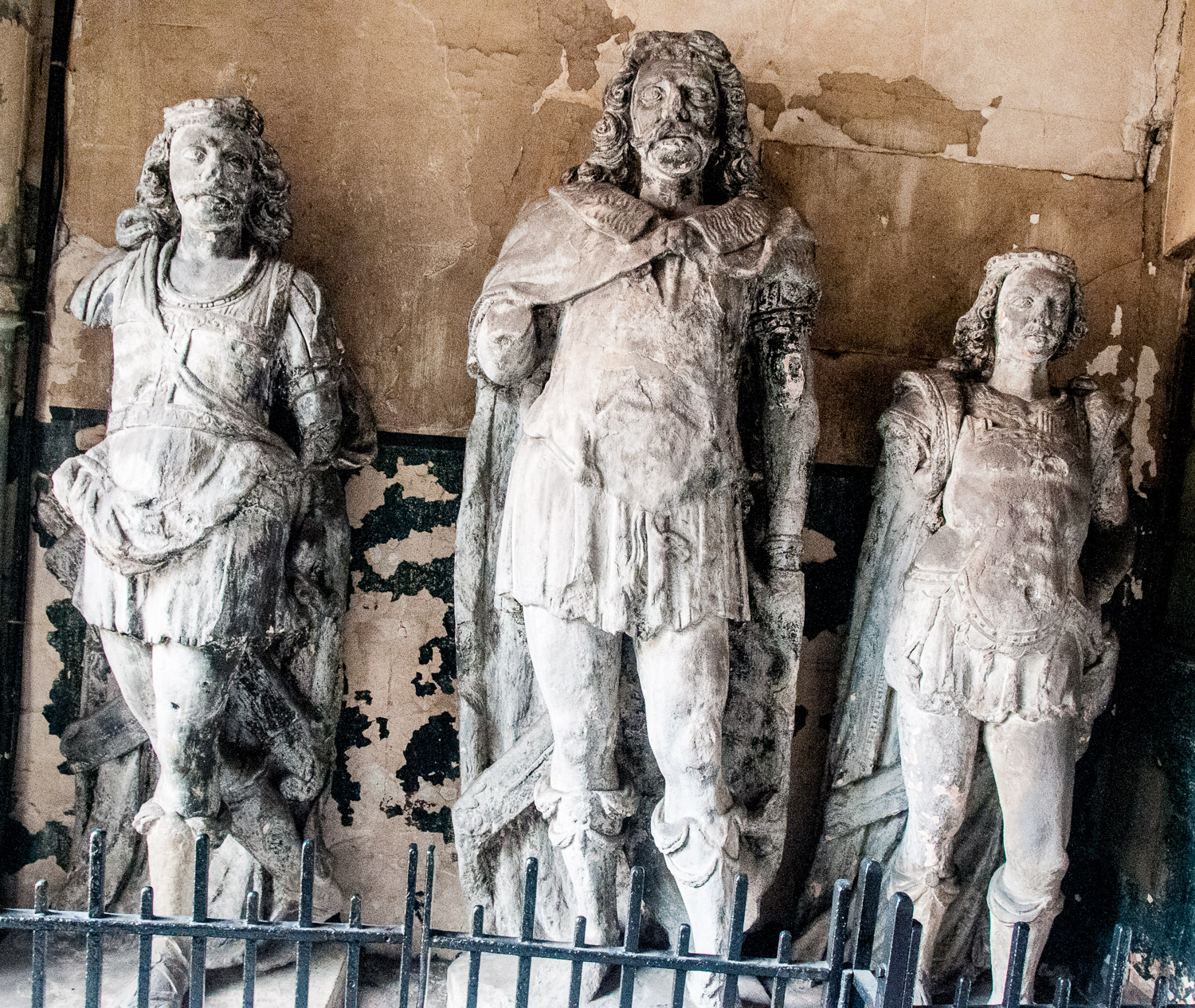 Probably dating from 1586 when the old Ludgate entrance to the City was rebuilt, the statues from the gate are remarkable, but very battered, survivors. Ludgate was demolished in 1760 and the statues were initially placed in the St Dunstan’s charnel house and then alongside the cemetery. Being pagan figures, the church didn’t care much for them and in 1839 they were sold to the Marquess of Hertford who incorporated them into a house in Regent’s Park. Viscount Rothermere brought them back to the church in 1935 along with the clock.

While the installation of the clock was accompanied by some celebration, Lud and his sons were afforded the kind of hospitality they had grown to expect from St Dunstan’s. They were placed in a sordid niche in the vestry porch where they have remained ever since, in an increasingly battered and uncared-for state.

And they are still there today. 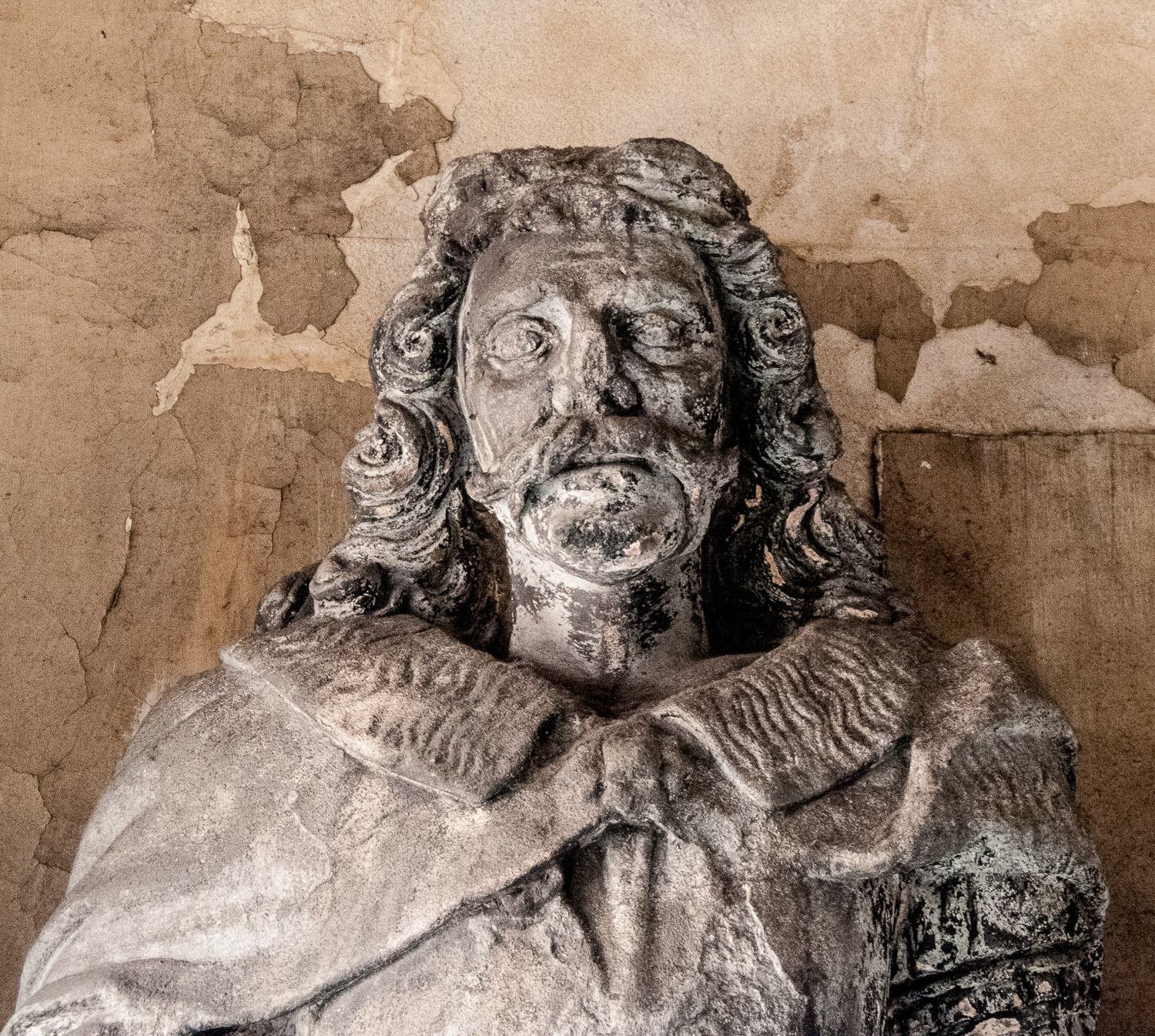 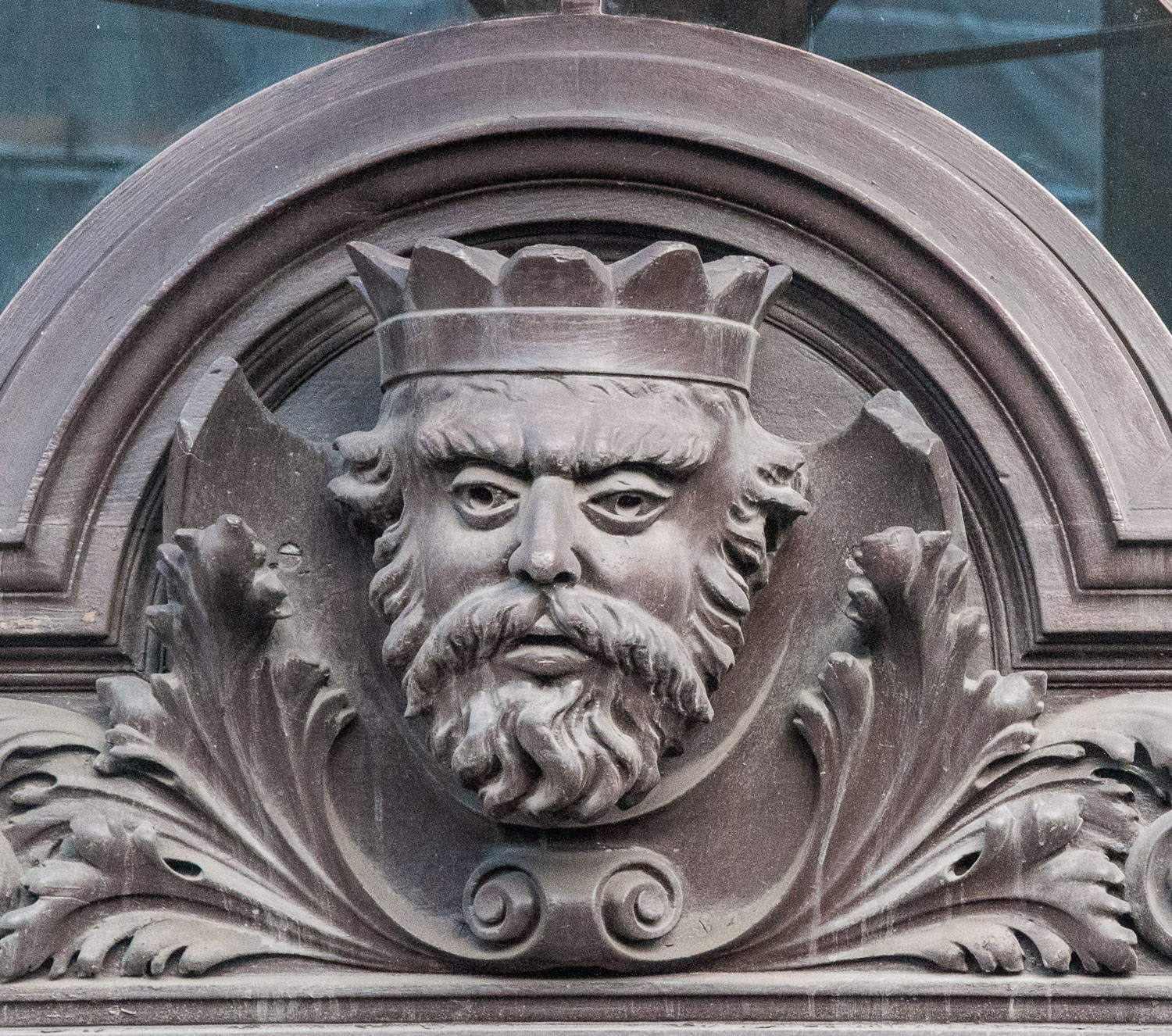 I am working on a post about Roman London to celebrate the opening of the London Mithraeum. By way of a taster, if you stand under the archway at St Magnus-the-Martyr Church on Lower Thames Street you will see an actual pile from a Roman wharf. It has been found to date from around 75AD. 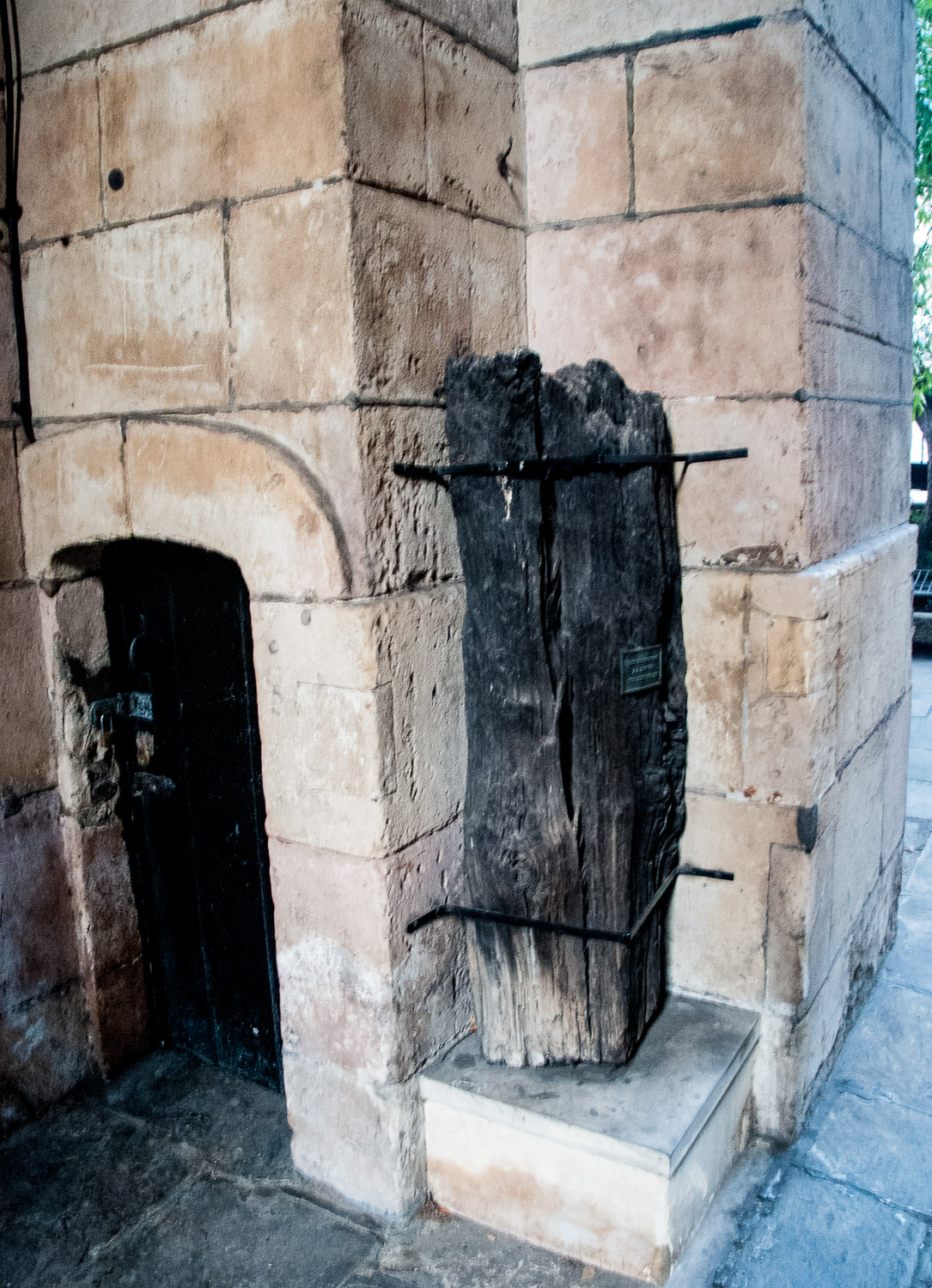 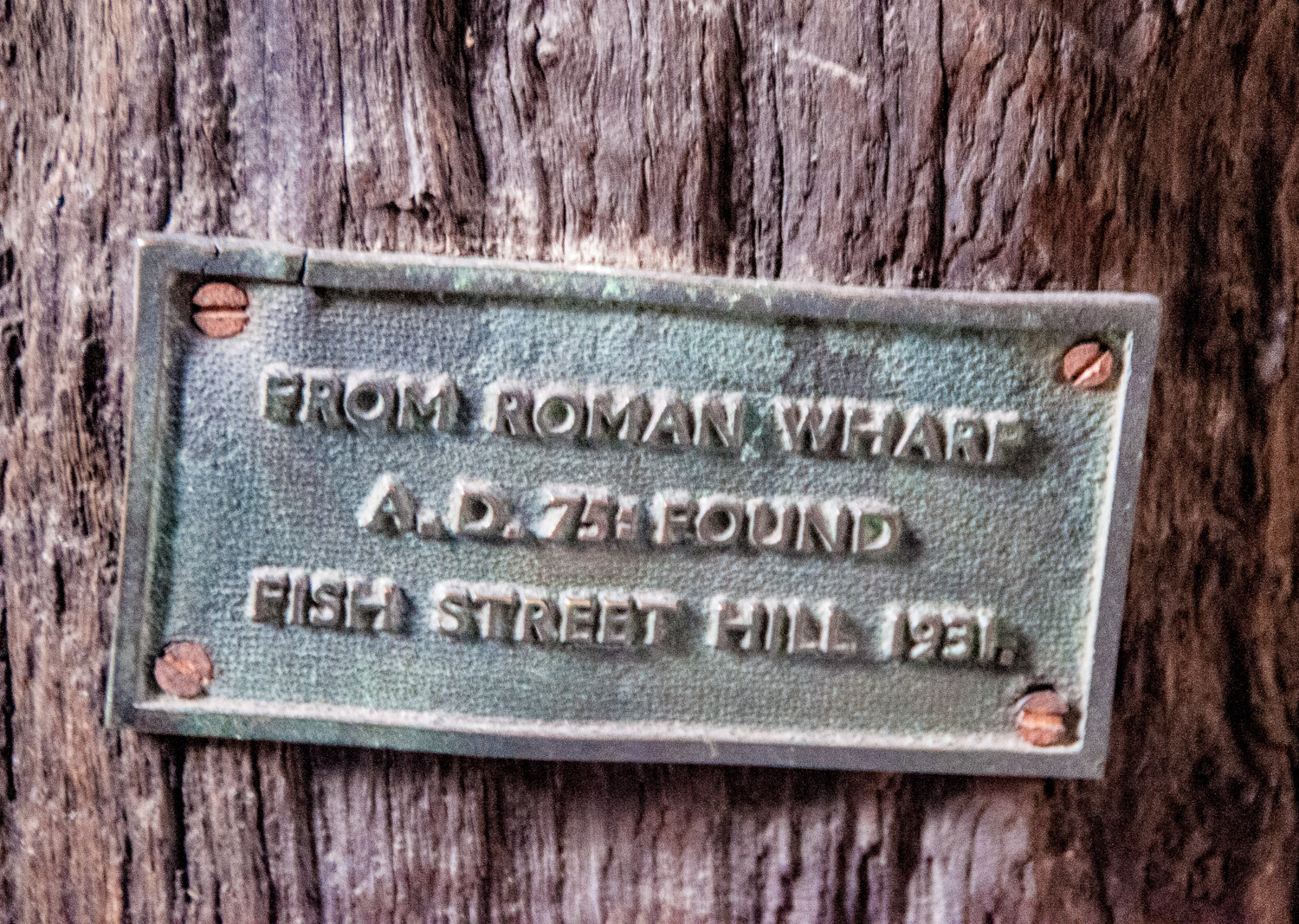 The City’s lone church towers and the Blitz