I have found that there is something about City animals – after you first start looking for them you see them everywhere and they become a bit of an obsession (or they have for me!).  So here is this week’s collection – I hope you like them and find them interesting. First up are two dolphins in very contrasting environments.

More than 50,700 Commonwealth merchant seamen lost their lives in the two World Wars and the Mercantile Marine Memorial (on Tower Green, alongside Tower Hill Underground station) commemorates the almost 36,000 of them who have no known grave. The boy riding the dolphin, accompanied by fishes and seahorses, is one of seven sculptures representing the seven seas by Sir Charles Wheeler. The sculpture is surrounded by plaques showing the names of the dead arranged alphabetically under their ship’s name and the name of the Master or Skipper. 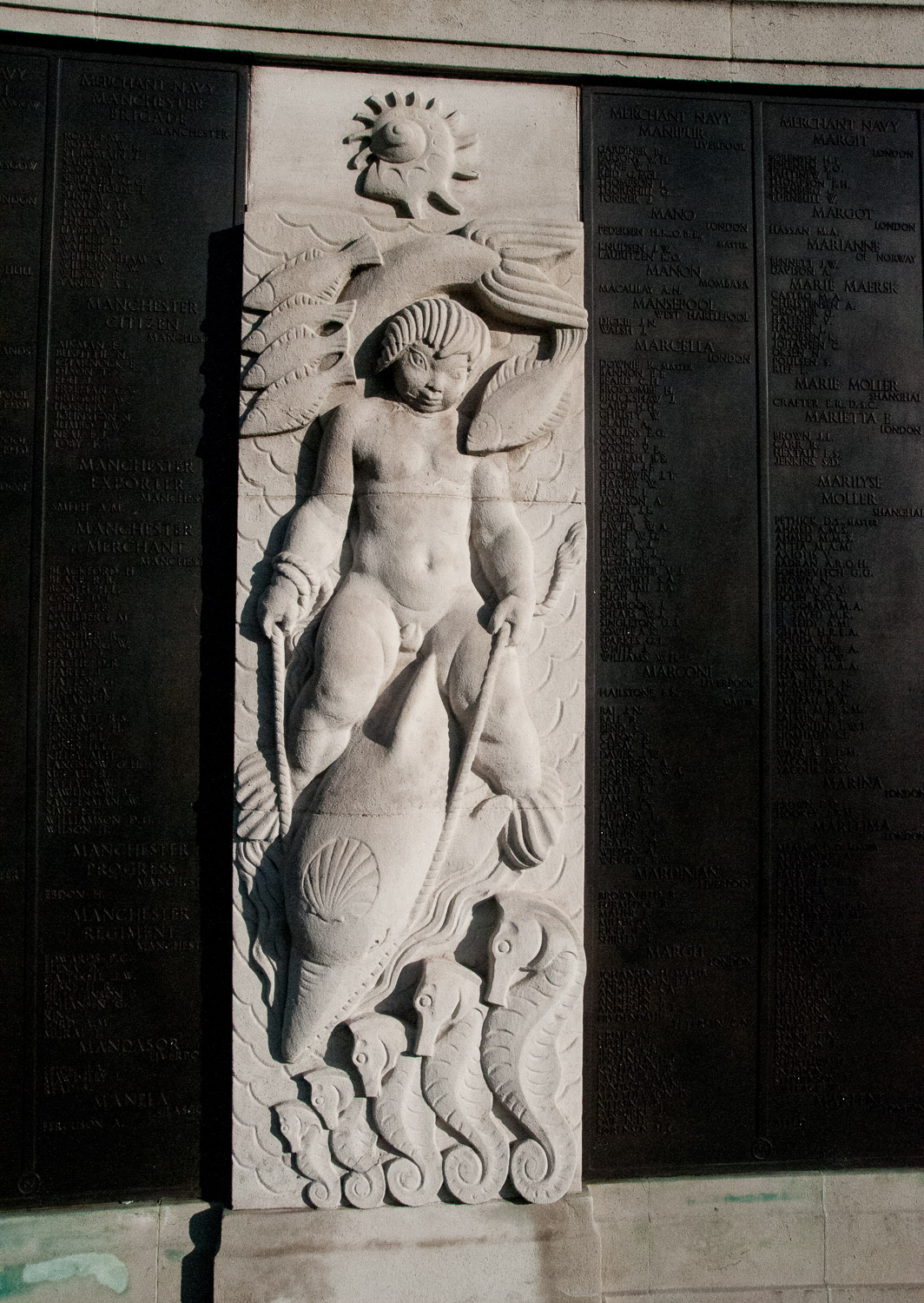 I will be writing a special blog on the subject of memorials later this year, and will include some more detailed photographs and commentary on the Mercantile Marine Memorial then. 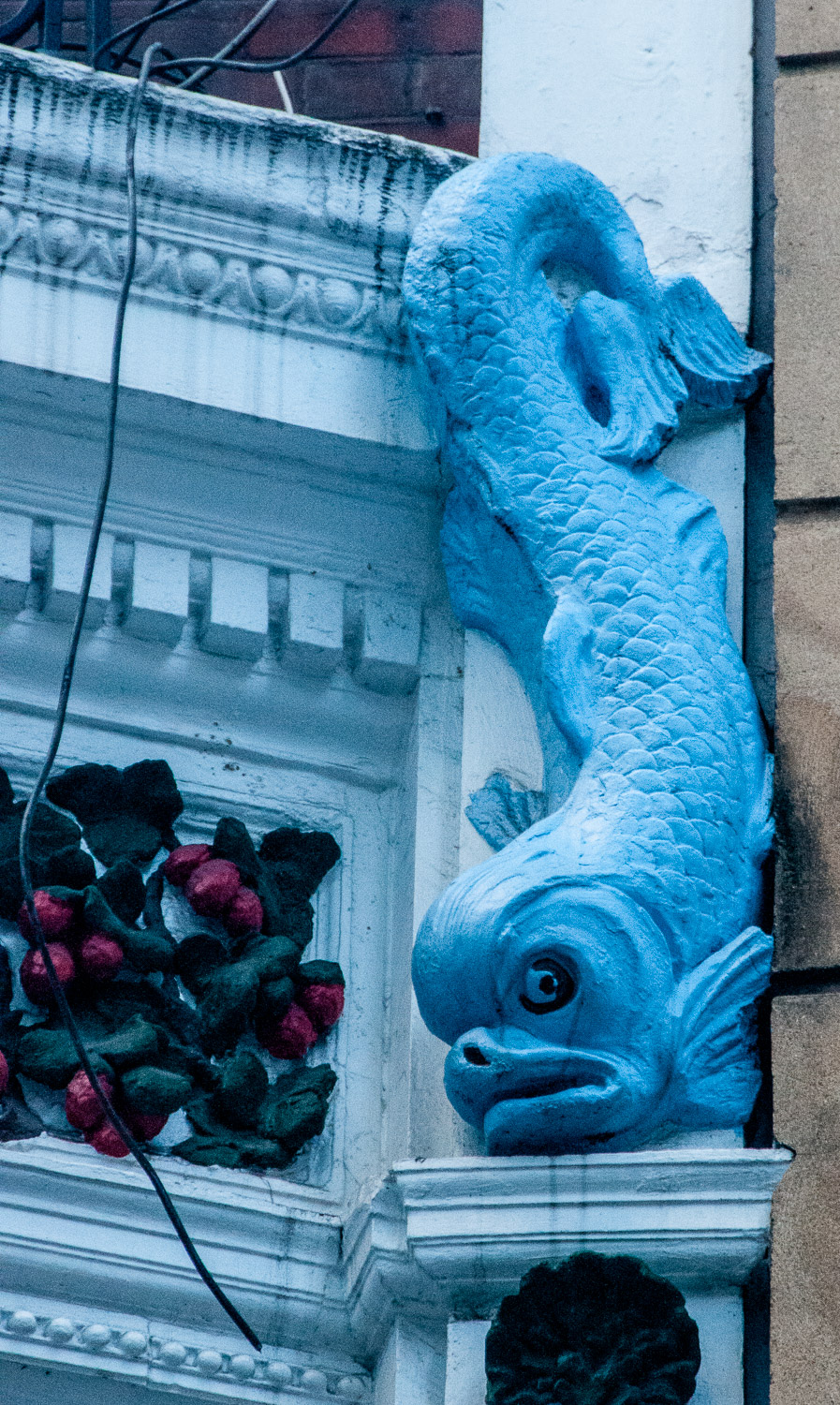 What about this splendid animal standing outside Spitalfields Market with Hawksmoor’s 1714 masterpiece, Christ Church, Spitalfields, in the background … 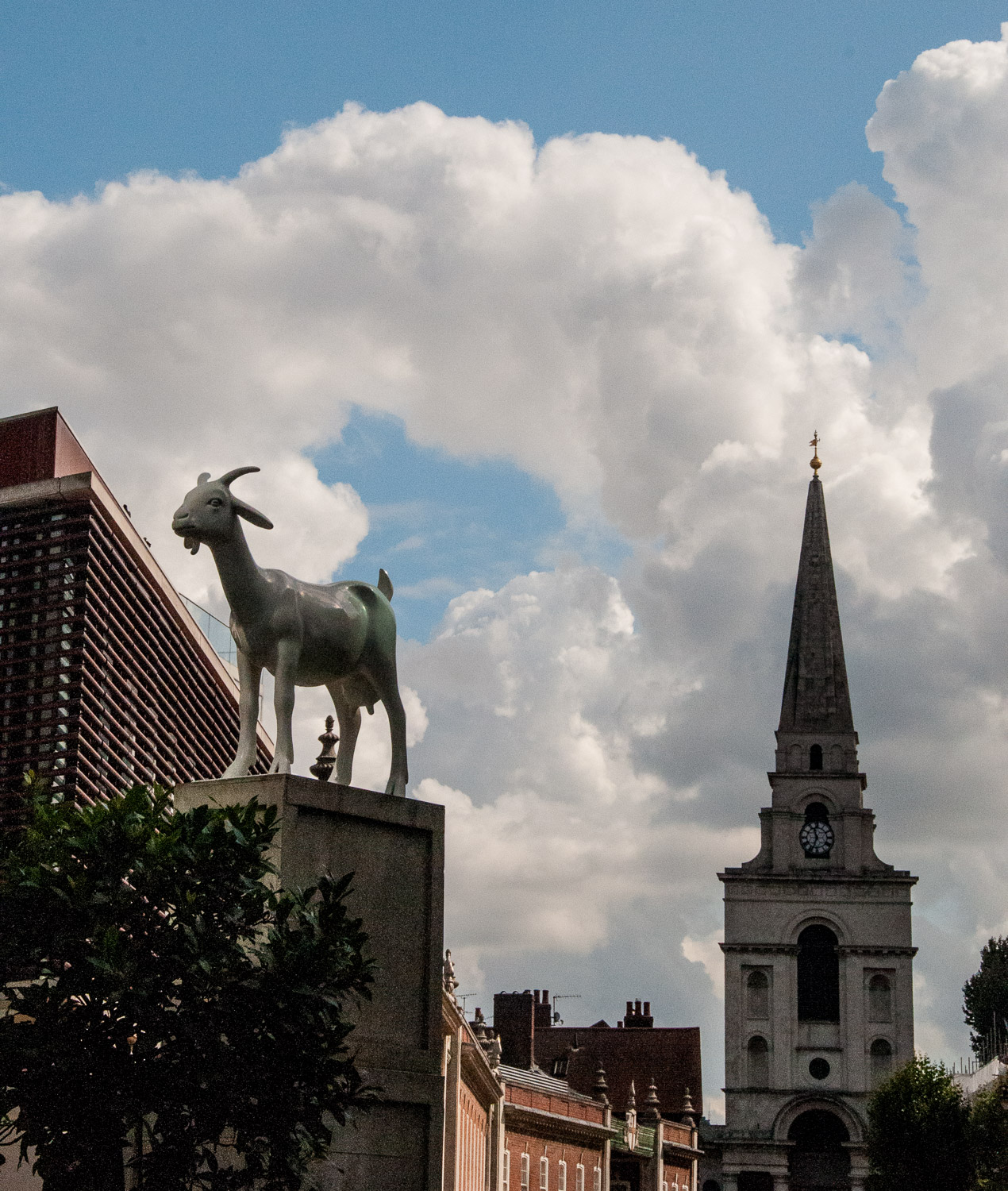 This goat would have got my vote

Wonderfully entitled I Goat, it was hand sculpted by Kenny Hunter and won the Spitalfields Sculpture Prize in 2010.

Goats are associated with non-conformity and being independently-minded. That is also true of London, its people and never more so than in Spitalfields

Is it possible to look up and see these floppy-eared dogs and smiling boar’s heads without smiling yourself?

Corner of Eastcheap and Philpot Lane

The boars’ heads reference the Boar’s Head Inn, Eastcheap, which Shakespeare has Sir John Falstaff visit in Henry IV. Presumably the dogs were used for boar hunting, but they are obviously pals here. 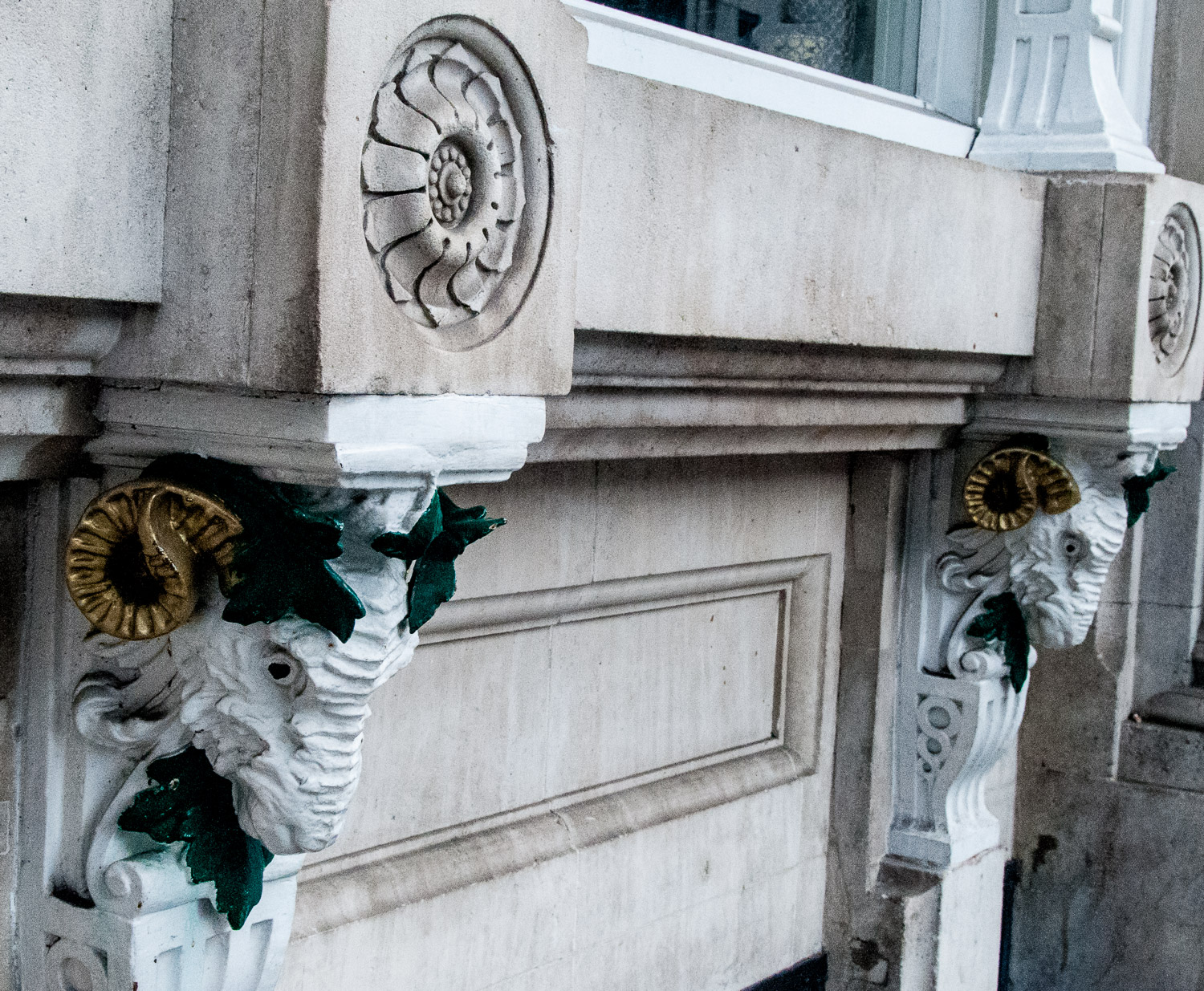 I consulted a great source of City knowledge, The City’s Lanes and Alleys by Desmond Fitzpatrick. He writes that …

For well into the second half of the last century, the building was a branch of a bank dealing with services to the wool trade, a business connection pleasantly expressed … by the rams’ heads crowned with green-painted leaves, as if Bacchus and Pan had met!

Copies of this excellent book are available by sending a cheque to the author at Holly Tree Cottage, Angel Street, Petworth, West Sussex GU28 OBG. It costs £15 plus £2 postage. Great value – 350 pages packed with knowledge.

This honey bee is, appropriately, a keystone over the entrance to Honey Lane which connects Cheapside with Trump Street. 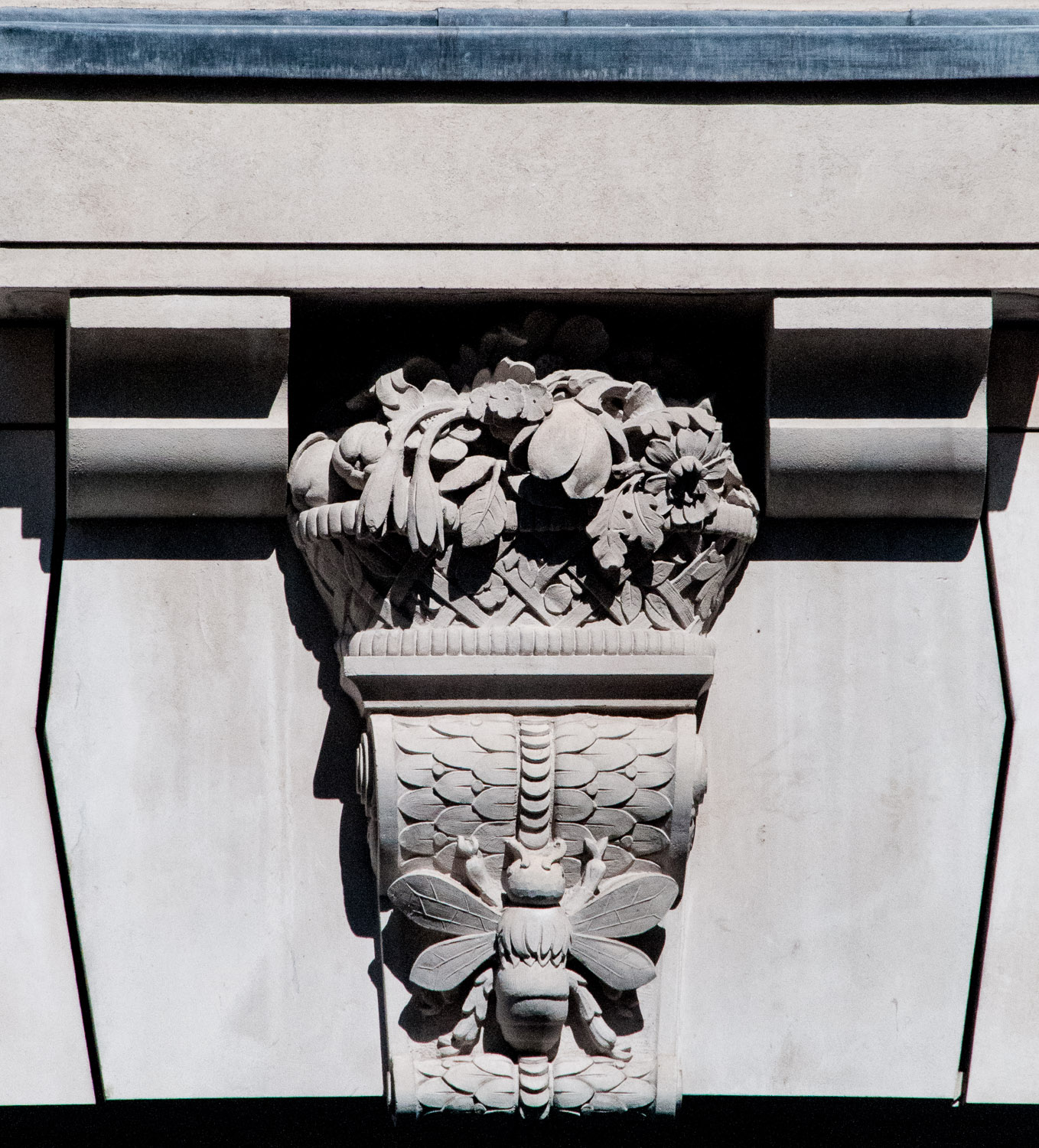 It is part of the old headquarters of The Sun Life Assurance Society whose Zodiac covered entrance I wrote about in my earlier blog Looking at the Stars. Although the connection to Honey Lane is obvious, it’s possible the insurance company also liked the reputation bees have for industriousness and providing for the future.

The name of the lane comes from the bee-keepers who used to live there and it also once led to All Hallows Honey Lane, a medieval church destroyed in the Great Fire. The area then became a small meat market which was itself replaced by City of London School in 1835. The area was significantly damaged by Second World War bombing and nothing now remains of the original buildings after post-war redevelopment. In fact, the lane itself has moved about 140 feet to the east.

The Black Eagle sign in Brick Lane reminds passers by of the Black Eagle Brewery. Founded in 1666, under the 18th century management of Sir Benjamin Truman it started its expansion to eventually become, as Truman, Hanbury and Buxton, one of the biggest brewers in the world. The brewery itself closed in 1989 and the site is now a small business hub and entertainment area. 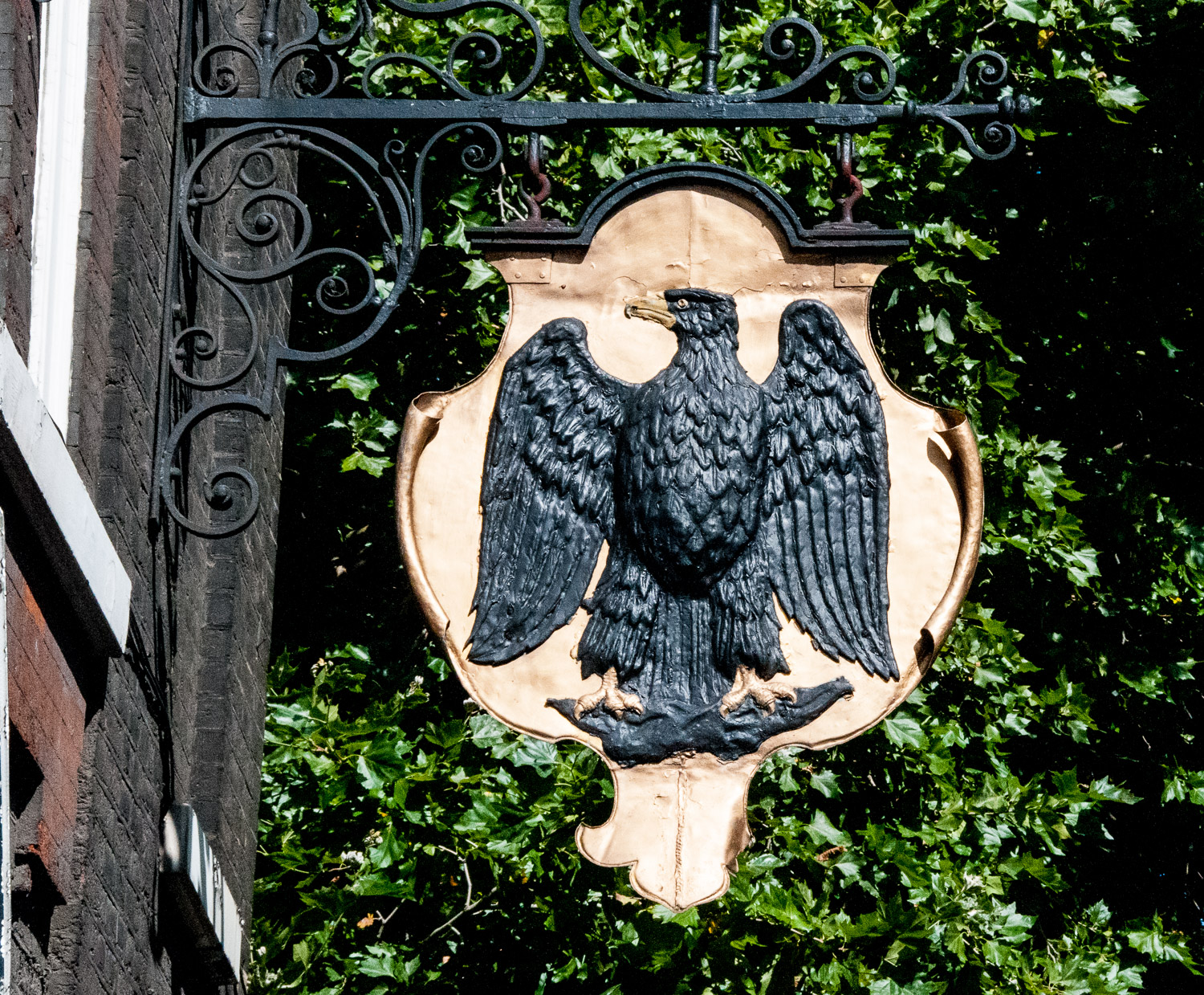 And finally, as most City folk know, the old Whitbread Brewery on Chiswell Street is now a hotel and conference centre.

However, not many know that the old horse stables still exist in Garrett Street EC1, just off Golden Lane. The mighty shire horses could still be seen delivering ale throughout London well into the 1970s until Whitbread moved out of brewing and into budget hotels and coffee shops. 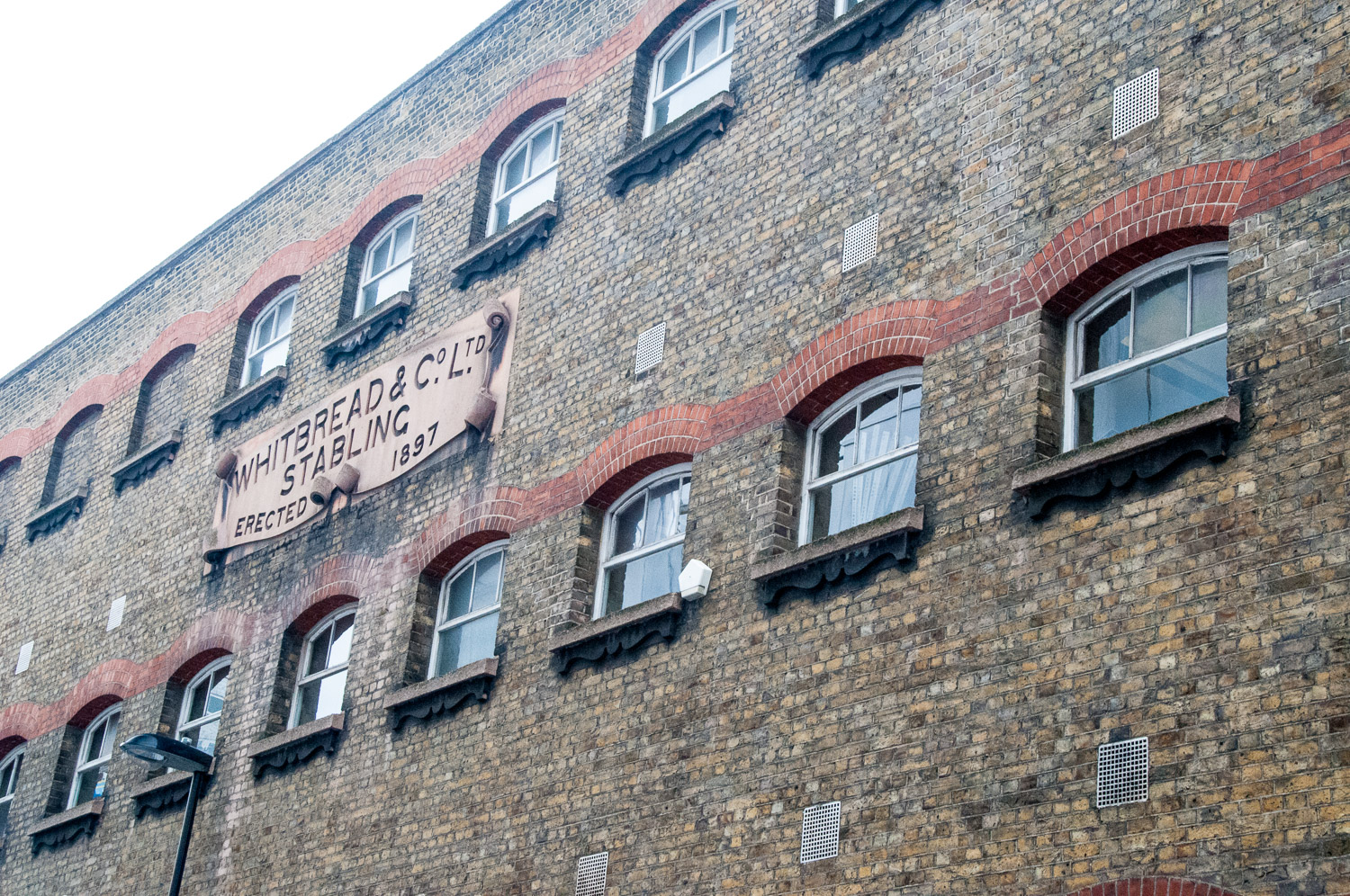 It’s sad in a way to note that in 1699 there were almost 200 substantial brewers in London, and in 1952 there were still 25 operating in the capital. Now only Fuller’s of Chiswick are left as the capital’s last remaining major brewer.

The Romans in London … and two Roman ladies