I have chosen these four statues because I love the background stories behind them and hope you find them interesting too.

First up is the one of Henry VIII over the main entrance to St Bartholomew’s hospital, the only outdoor statue of the king in London. If you have seen and admired the famous Holbein portrait, the king’s pose here is very familiar. He stands firmly and sternly with his legs apart, one hand on his dagger, the other holding a sceptre. He also sports an impressive codpiece. 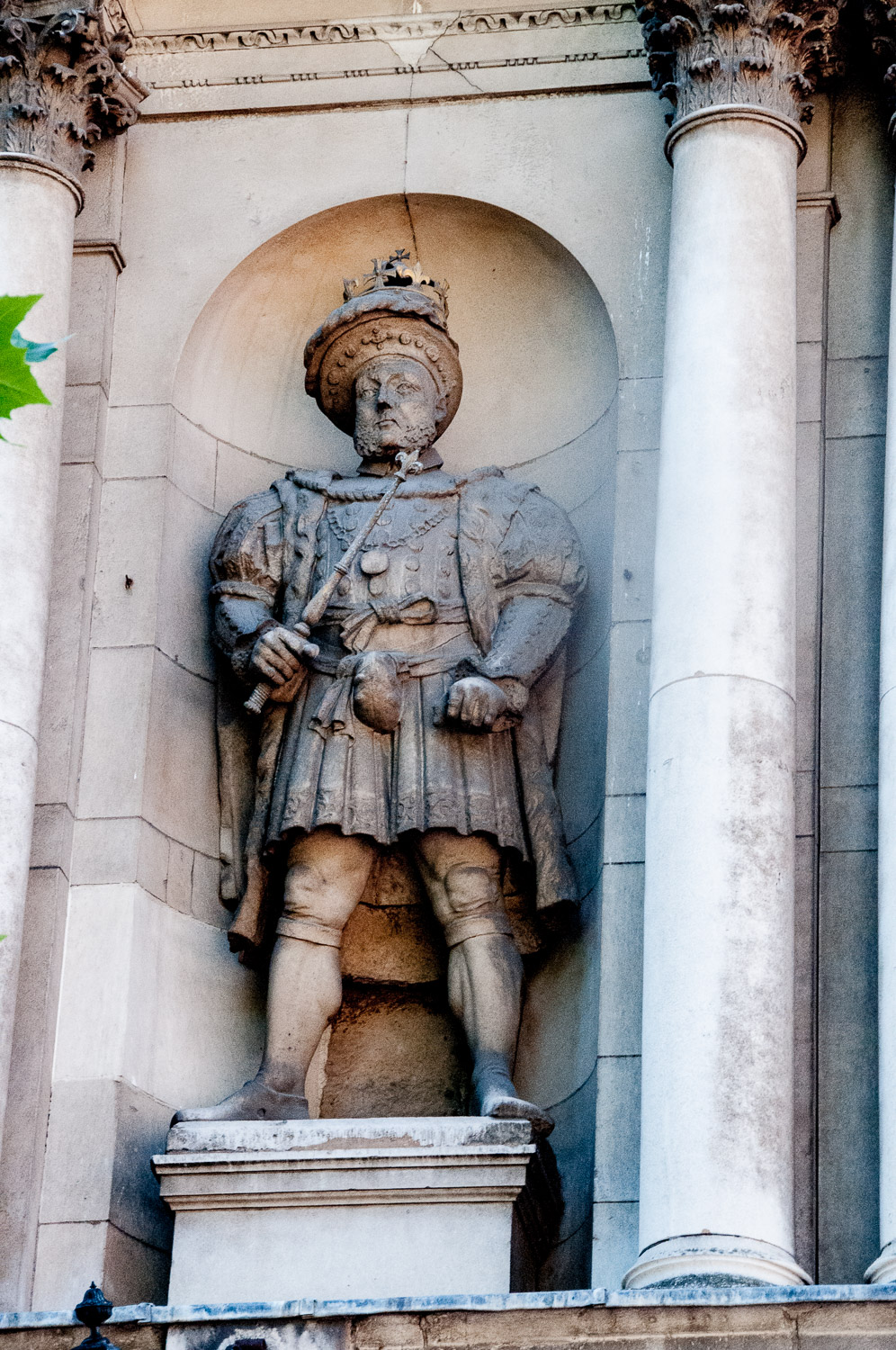 The hospital was founded in 1123 in the reign of Henry I and, during the Peasants’ Revolt of 1331, Wat Tyler died there of a stab wound in what we would now call the A&E department.  Bart’s, as it became known affectionately, was put seriously at risk seven Henrys later in 1534, when Henry VIII commenced the Dissolution of the Monasteries. The nearby priory of St Bartholomew was suppressed in 1539 and the hospital would have followed had not the City fathers petitioned the king and asked for it to be granted back to the City. Their motives were not entirely altruistic. The hospital, they said, was needed to help:

Henry finally agreed in December 1546 on condition that the refounded hospital was renamed ‘House of the poore on West Smithfield in the suburbs of the City of London, of King Henry’s foundation’. I suspect people still tended to call it Bart’s. Henry finally got full public recognition when the gatehouse was rebuilt in 1702 and his statue was placed where we still see it today. The work was undertaken and overseen by the mason John Strong, who was at the same time working for Sir Christopher Wren on St Paul’s Cathedral. Such were the masons’ talents, no architectural plans were needed to complete the work.

Fleet Street boasts two queens – one responsible for the execution of the other.

Mary, Queen of Scots was born in 1542, daughter of King James V of Scotland and Mary of Guise. Briefly Queen of France, in 1559, Mary ruled Scotland from 1542-1567. Following an uprising she fled to England putting herself under the protection of her cousin, Elizabeth I. Mary’s fervent Catholicism, and claim to the English throne, made her a target for plots and Elizabeth ordered her beheading for treason in 1587.

Mary Queen of Scots House was built in 1905 for a Scottish insurance company but I have been unable to discover which one. The developer, Sir Tollemache Sinclair, was a big fan of the Queen and his architect, R. M. Roe, created an extravagant, theatrical building with a special niche for her statue. Head slightly bowed, she peers down at us wearing an elegant headpiece and a wide prominent ruff. Unfortunately the sculptor’s name is unknown. Do glance up at her if you pop in to Pret’s on the ground floor for a lunchtime sandwich. 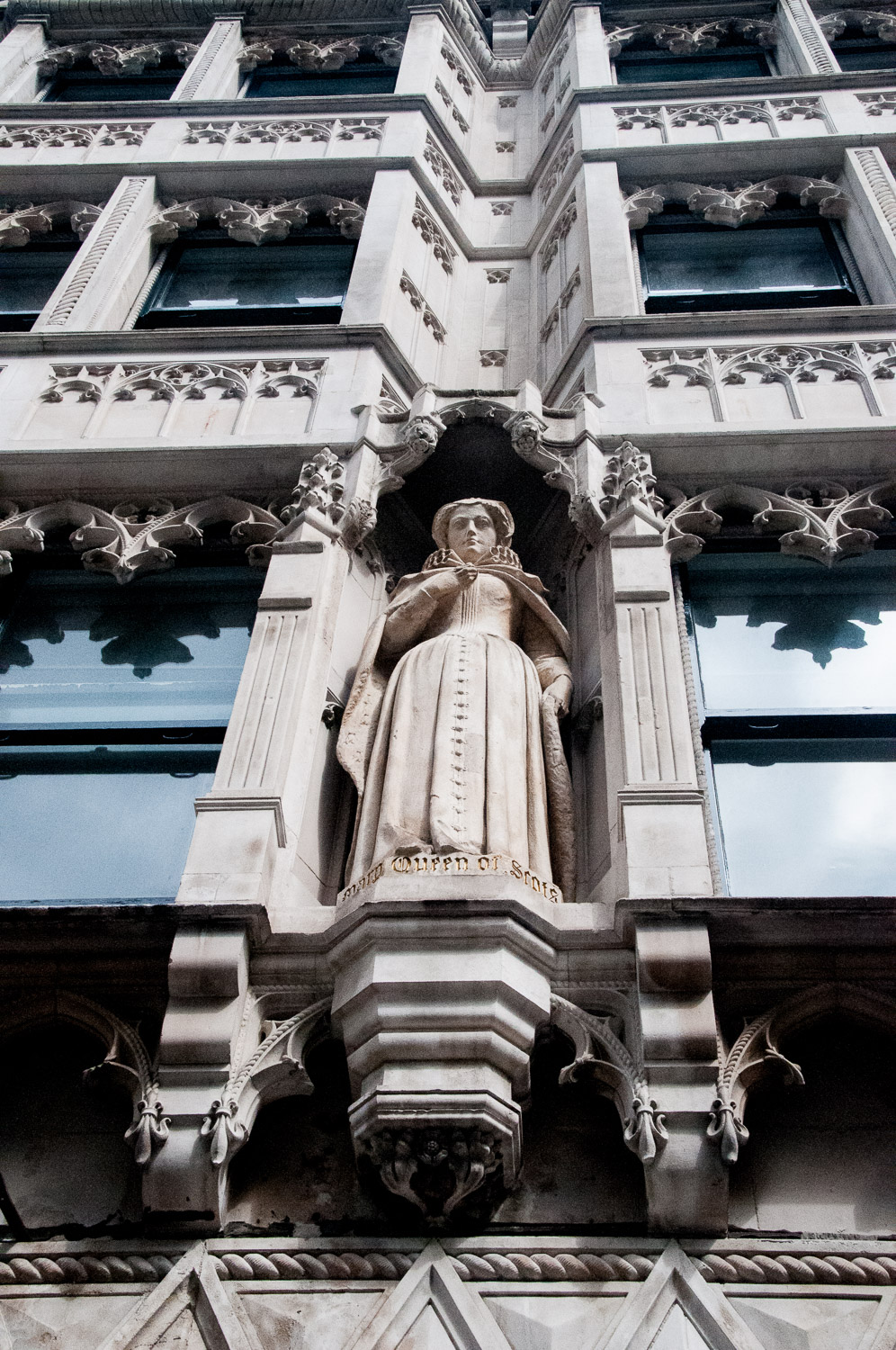 And now her nemesis. 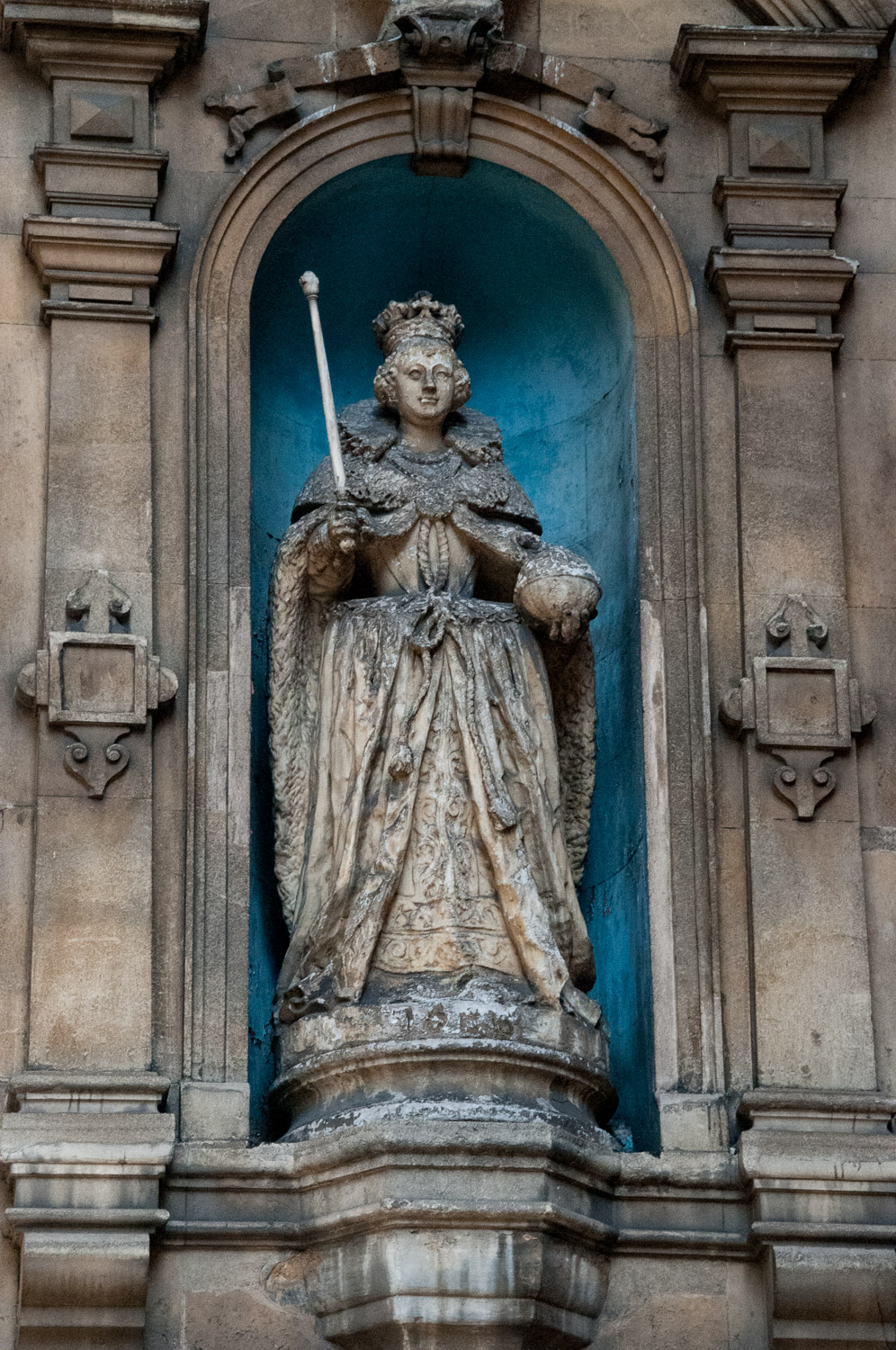 She looks young, doesn’t she?

This statue of Queen Elizabeth I is nearby in a niche at St Dunstan-in-the-West and its history is rather complex. Some current thinking is that the Queen dates from 1670-99 despite a date on the base of 1586, which would have made it the only statue carved in her lifetime. It is now thought that, rather than the date of sculpture, this date was inscribed on it when the statue was placed on a restored Lud Gate in 1670 after the Great Fire and is merely making reference to the original gate. When the gate was demolished in 1760 she was moved to a previous St Dunstan’s but this was torn down in 1829-33 to be replaced by the current building. Meanwhile it seems that the statue spent the time in the basement of a nearby pub. It was only when that too was demolished in 1839 that the statue was rediscovered and put in its current niche on St Dunstan’s. Millicent Fawcett, the prominent suffragist, left £700 in her will for the statue’s upkeep and the funds are managed by the Society for the Protection of Ancient Buildings.

Brandy Nan, left in the lurch, her face to the gin shop, her back to the church

One has to feel sorry for Anne – and not just because of the scurrilous rhyme referring to her alleged fondness for alcohol. Of her 18 pregnancies, none of her children survived infancy except for one boy who reached 11, and this sadness may have contributed to her tendency to overindulge in both food and drink. 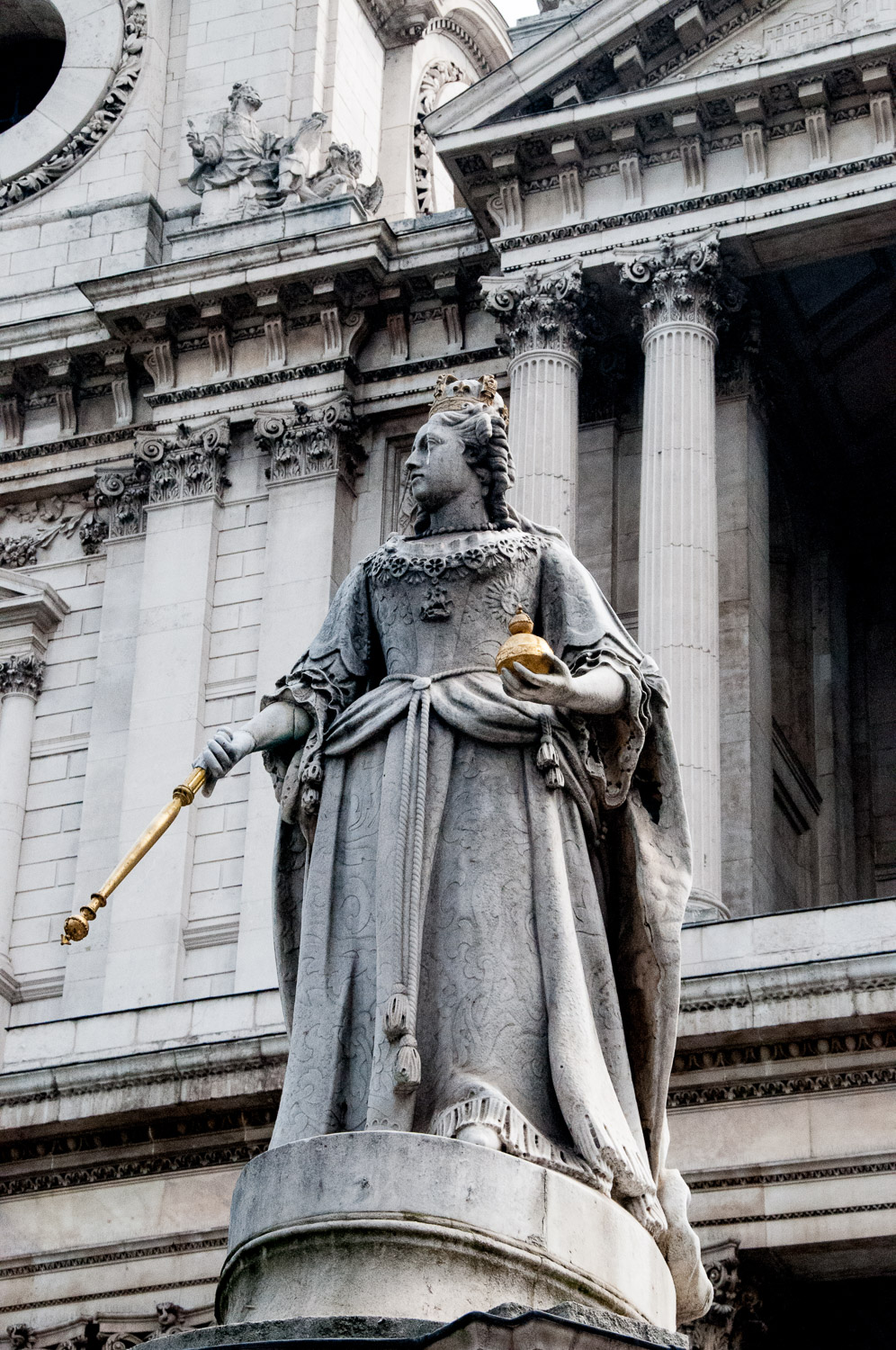 Here she stands outside the west entrance to St Paul’s Cathedral – an 1884-6 sculpture which replaced an earlier weather-beaten version of 1712. She looks imperiously upwards, holding a sceptre and orb and wearing the Order of St George around her neck.

She is surrounded by allegorical figures, the picture below being that of America. 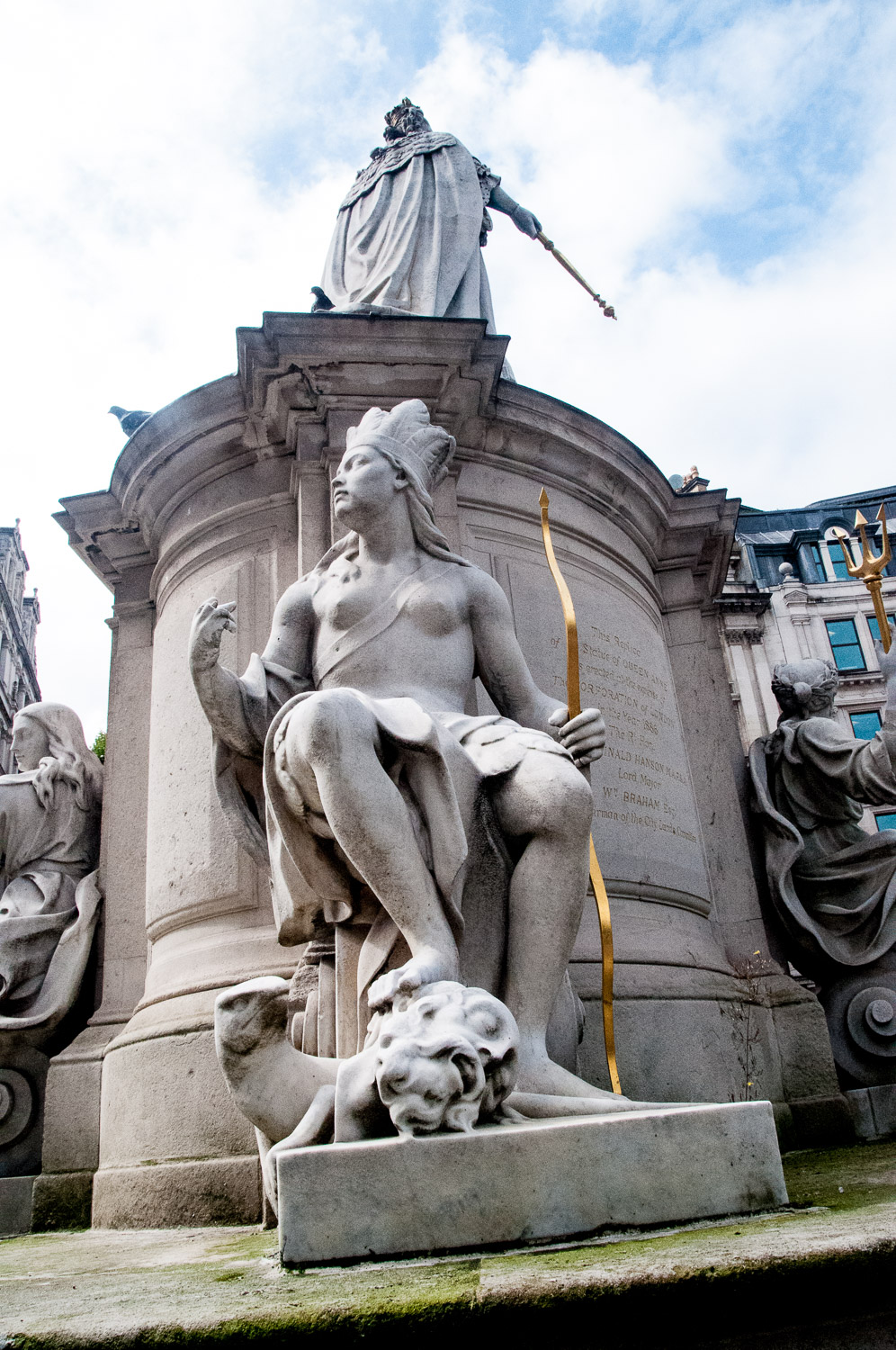 ‘America’ with a not very accurate alligator

America wears a feathered head-dress, holds a metal bow and has a quiver of arrows on her back. Her foot rests on what looks like the severed head of a European. The strange lizard like creature was described in the original statue as ‘…an allegator creeping from beneath her feet; being an animal very common in some parts of America, and which lives on land and in the water’. 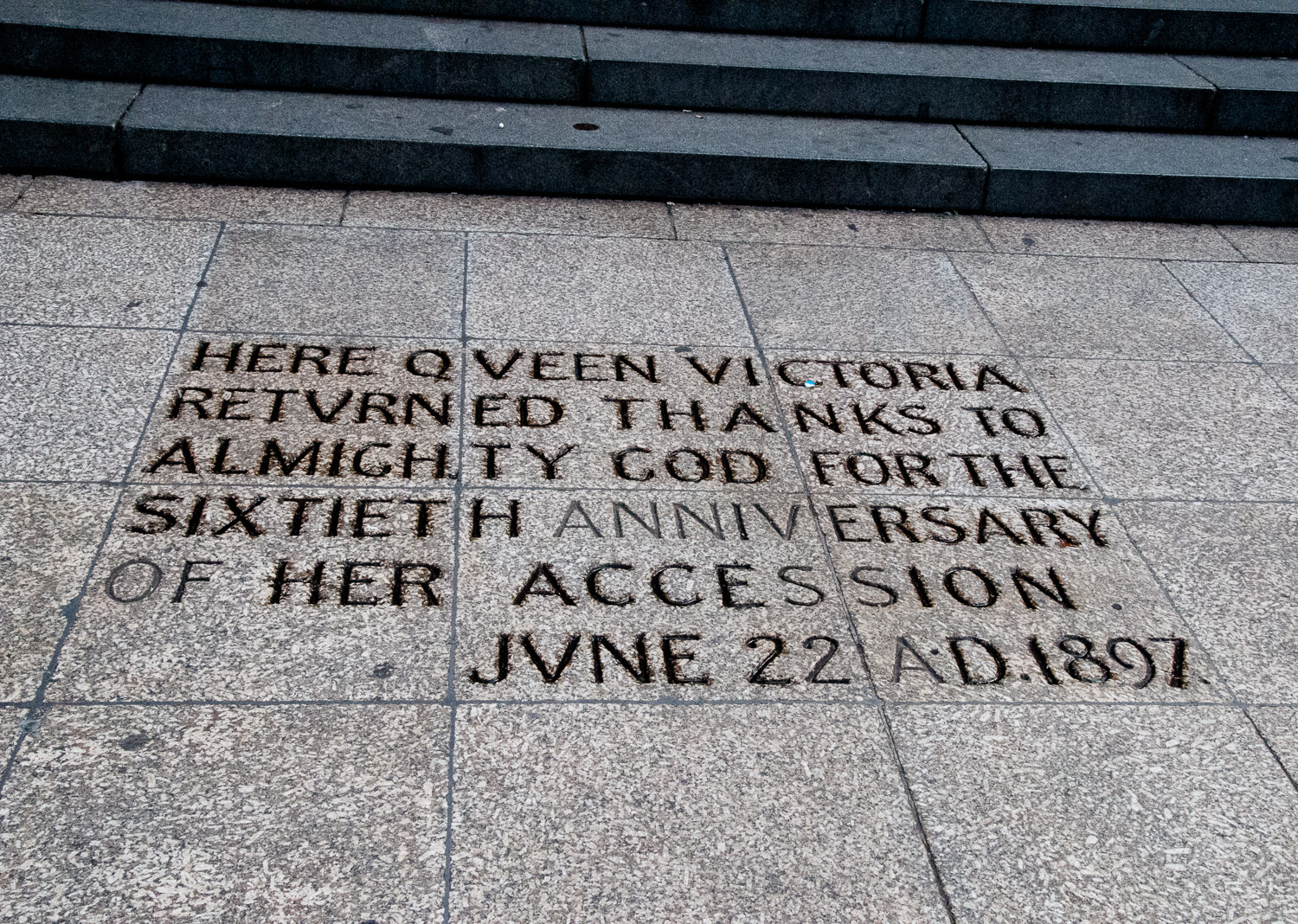 Queen Victoria celebrated her Diamond Jubilee here in 1897. She sat outside in her carriage for the service, being then too infirm to climb the Cathedral steps. It was suggested that Anne’s statue should be moved for the occasion, but Victoria would have none of it, apparently commenting

‘Certainly not, someone in future might want to move a statue of me, and I should not like that at all’.