I was browsing the British Sundial Society website (as you do) and it inspired me to look for examples of these elegant devices in the City. My research also took me on a bit of a journey around Spitalfields, which I hope you enjoy reading about.

Sundials measure local solar time, and were the only source of time for business and government before the invention of the clock, and even then were used to check clock accuracy whilst the mechanisms were still being perfected. The coming of the railways in the early 19th century meant that time needed to be consistently measured throughout the country, and this speeded up clock development. Sundials, however, survived in many places, and are still being manufactured today, serving both a practical purpose along with being aesthetically pleasing.

There are some fine examples in the City, measuring out the minutes using the shadow cast by the sun as it appears to move from east to west, reaching its zenith at mid-day. 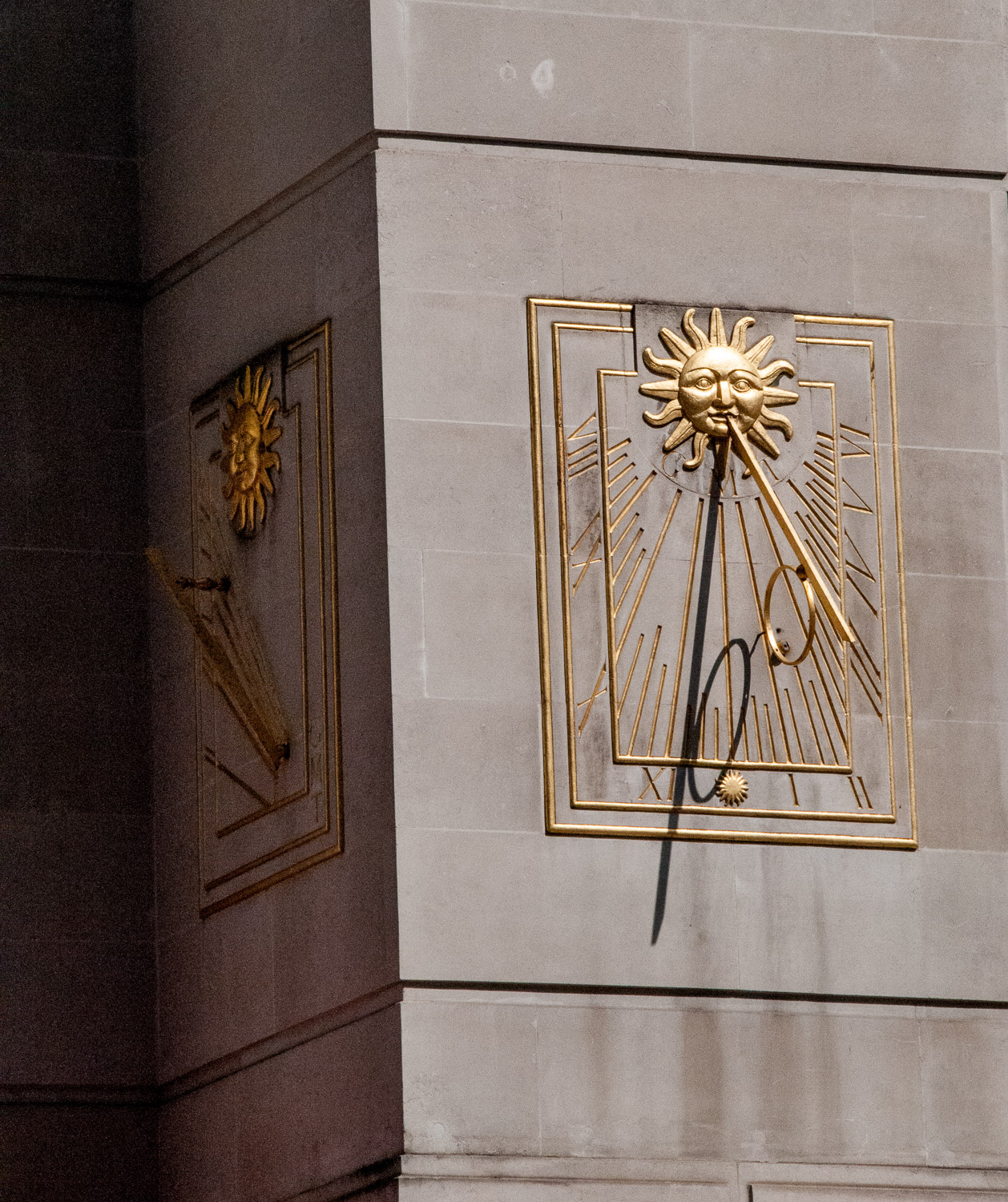 On the corner of 107 Cheapside

Completed in 1958 for the Sun Life Assurance Society, the two dials incorporate the company’s sunburst logo.The south facing sundial has the letters GMT under the sun face and covers hours from 8:00 am to 6:00 pm. The west facing sundial also shows the letters GMT in the bottom right corner of the dial and covers the hours 2:00 in the afternoon until 7:00 in the evening.

The building will be familiar to any of you who have had a chance to look at the signs of the Zodiac arranged around its main entrance and described my earlier blog Looking at the Stars. 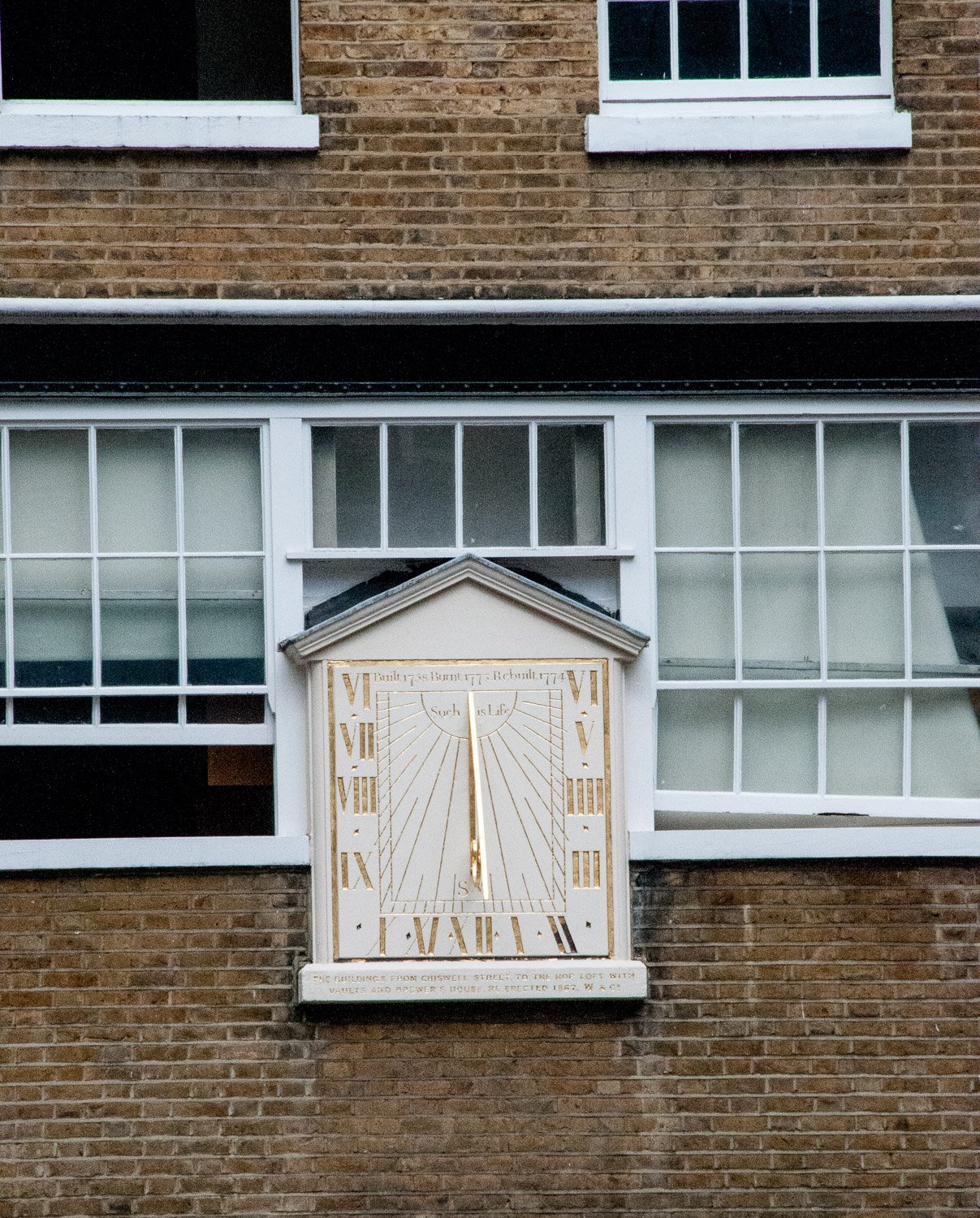 Once part of the Whitbread Brewery, this dial is now behind locked security gates but is still visible from the road. It is made of wood, with its motto ‘Such is Life’, dating back to 1771. Around the sides it has the interesting inscription Built 1758, burnt 1773, rebuilt 1774.

There is a late 17th Century dial on St Sepulchre’s, Holborn Viaduct. 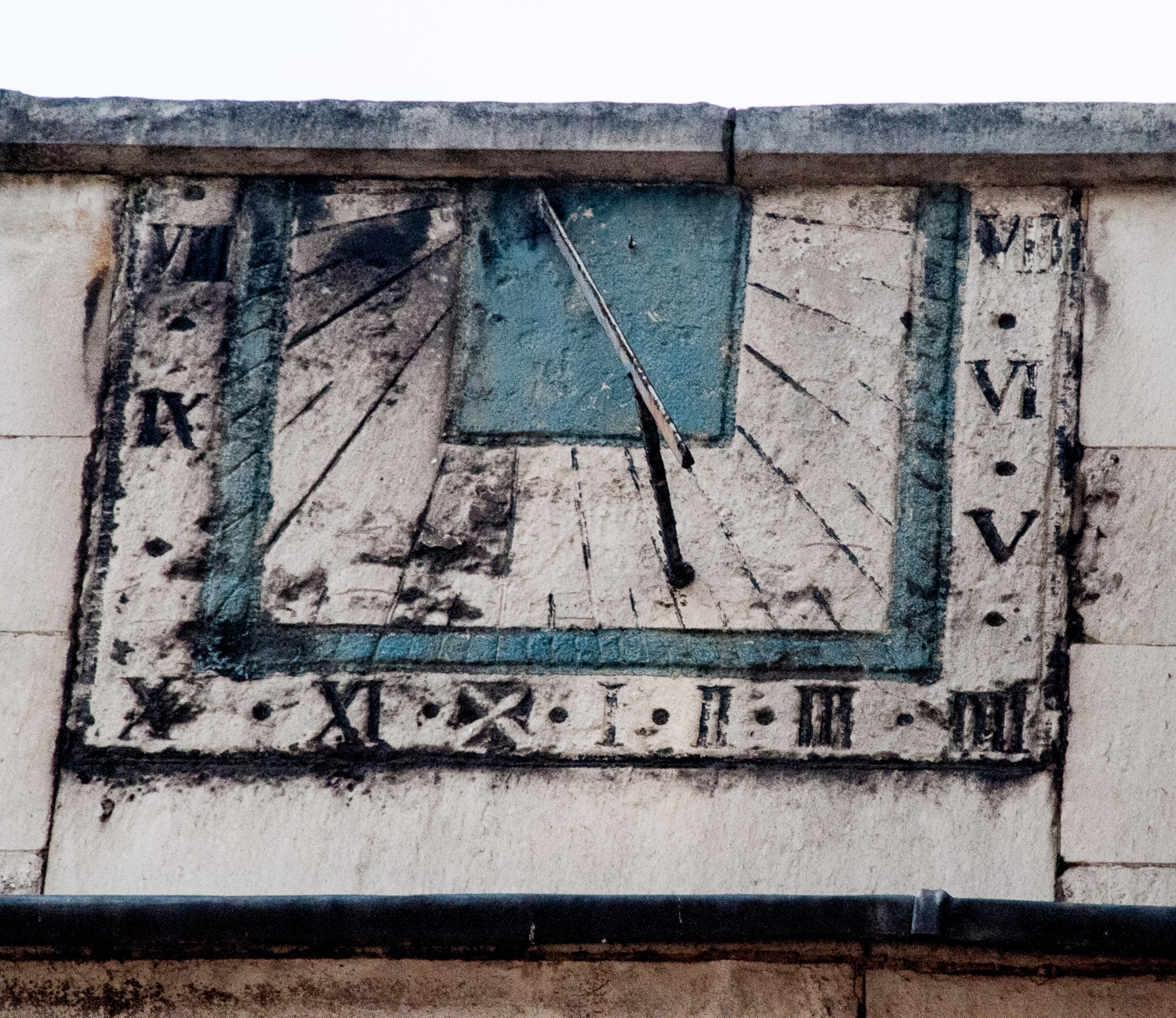 The dial is on the parapet above south wall of the nave and is believed to date from 1681. It is made of stone painted blue and white with noon marked by an engraved ‘X’ and  dots marking the half hours. It shows Winter time from 8:00 am to 7:00 pm in 15 minute marks. I thought it was curious that the 4:00 pm mark is represented as IIII rather than IV – I have no idea why. Across the road is the Central Criminal Court (the Old Bailey) where once stood the notorious Newgate Prison. I wondered if the Newgate executioner might have taken the time from this dial to help him decide when to start the journey to Tyburn scaffold, along with his unfortunate condemned prisoners.

If you visit the church, do have a look at the corner of the churchyard where you will find London’s first public drinking fountain as described in my earlier blog Philanthropic Fountains. You also get a good view of another previous blog subject, Lady Justice, atop the Old Bailey across the road.

Whenever I visit the Inns of Court I like to enter by one of the old gates in Fleet Street – it really is like stepping back in time, from the bustle of the City to the leafy, collegiate atmosphere of the Inns.

A Fleet Street entrance designed by Sir Christopher Wren. The Lamb and Flag is the emblem of Middle temple. 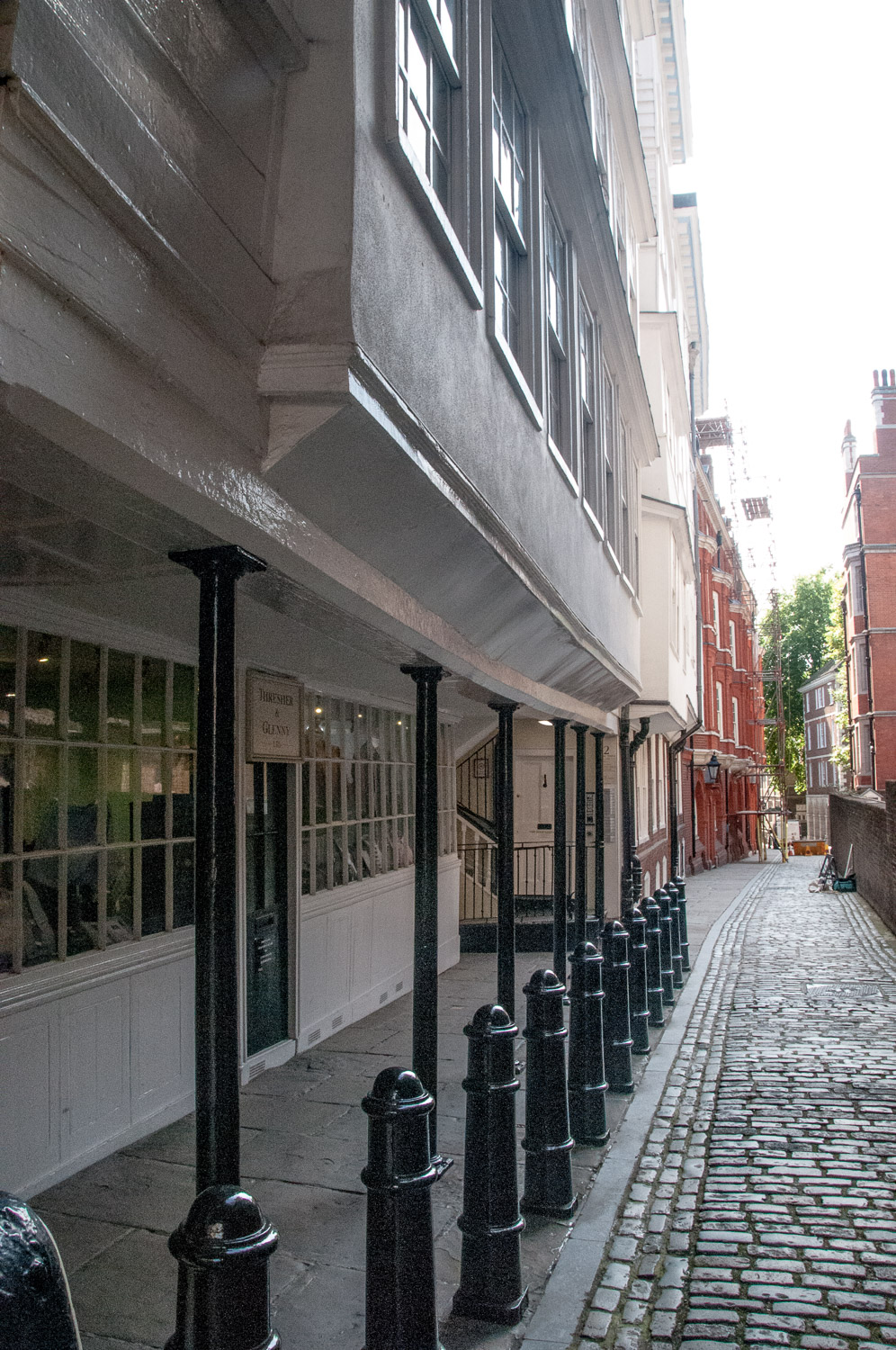 Lane leading from Fleet Street into the Inns

I read somewhere that Dr Johnson used to enjoy swinging round these supporting pillars when he was in an ebullient mood!

There are two fine sundials nearby. 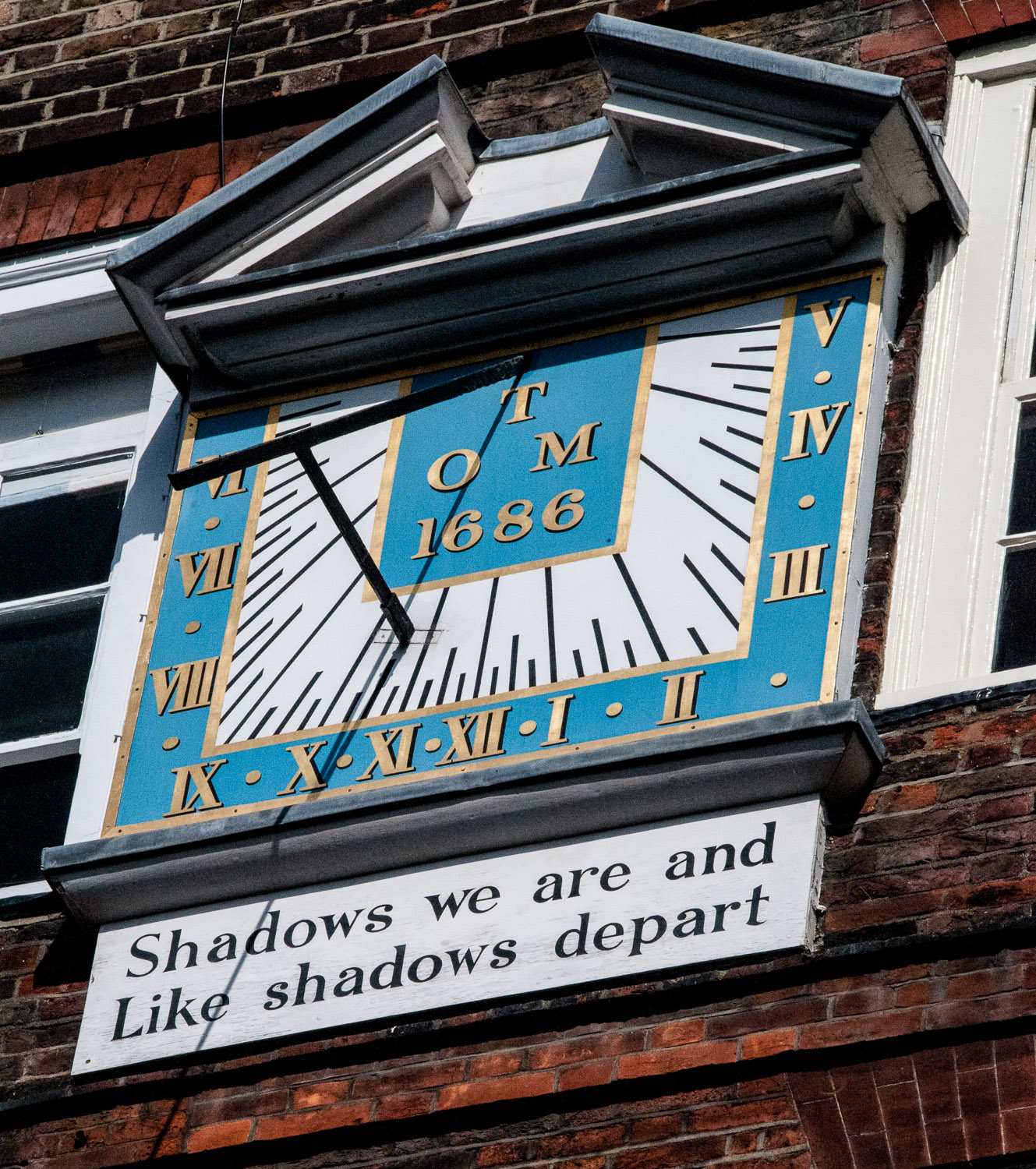 Reminding the lawyers of their mortality.

And in Fountain Court … 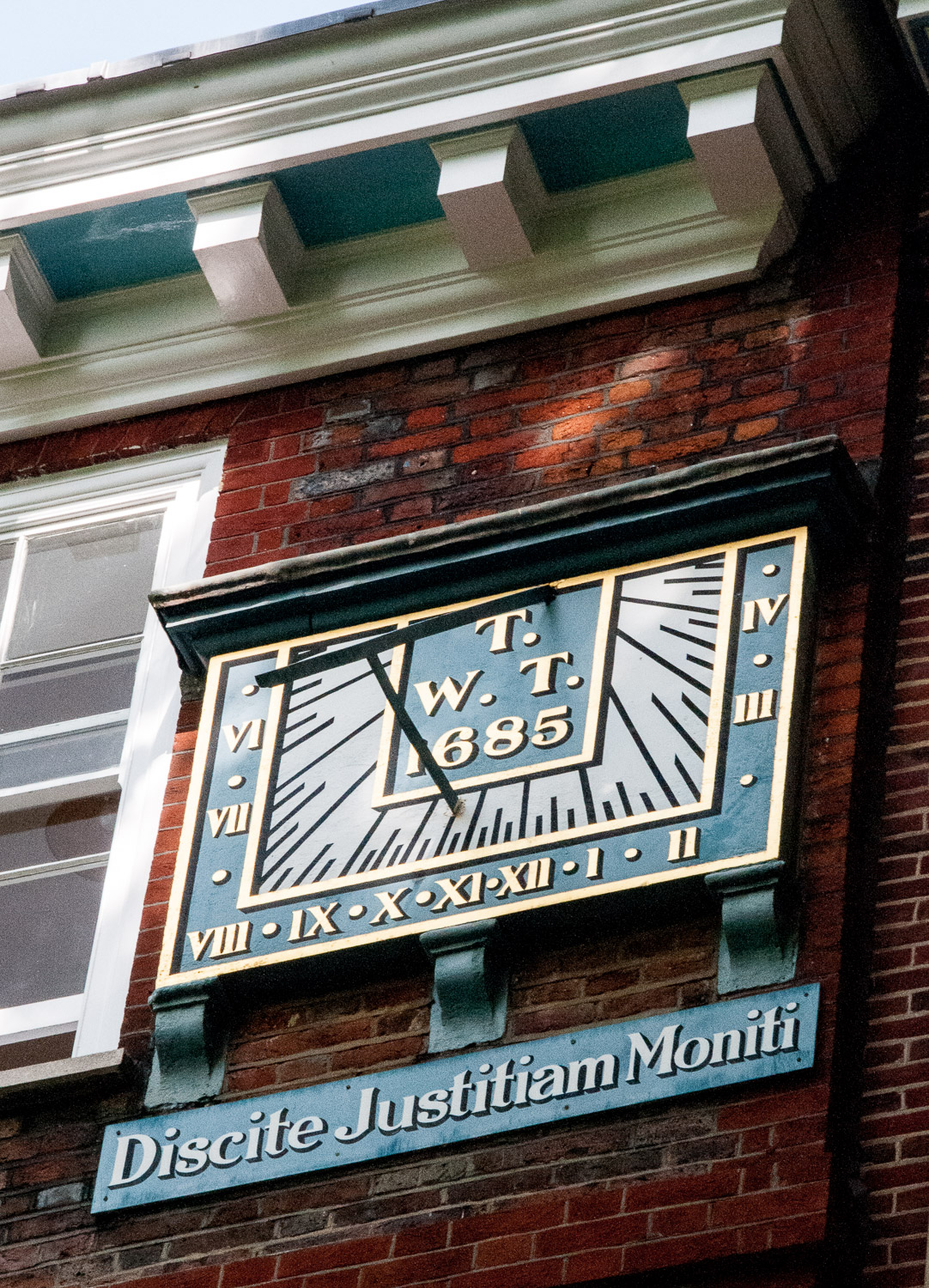 ‘Learn justice you who are now being instructed’

The TWT refers to the Middle Temple Treasurer in 1684, William Thursby, a successful lawyer and later MP. He spoke of the study of law as ‘a rough and unpleasant study at the first, but honourable and profitable in the end … as pleasant (and safe and sure) as any profession’.

And now my two favourites. 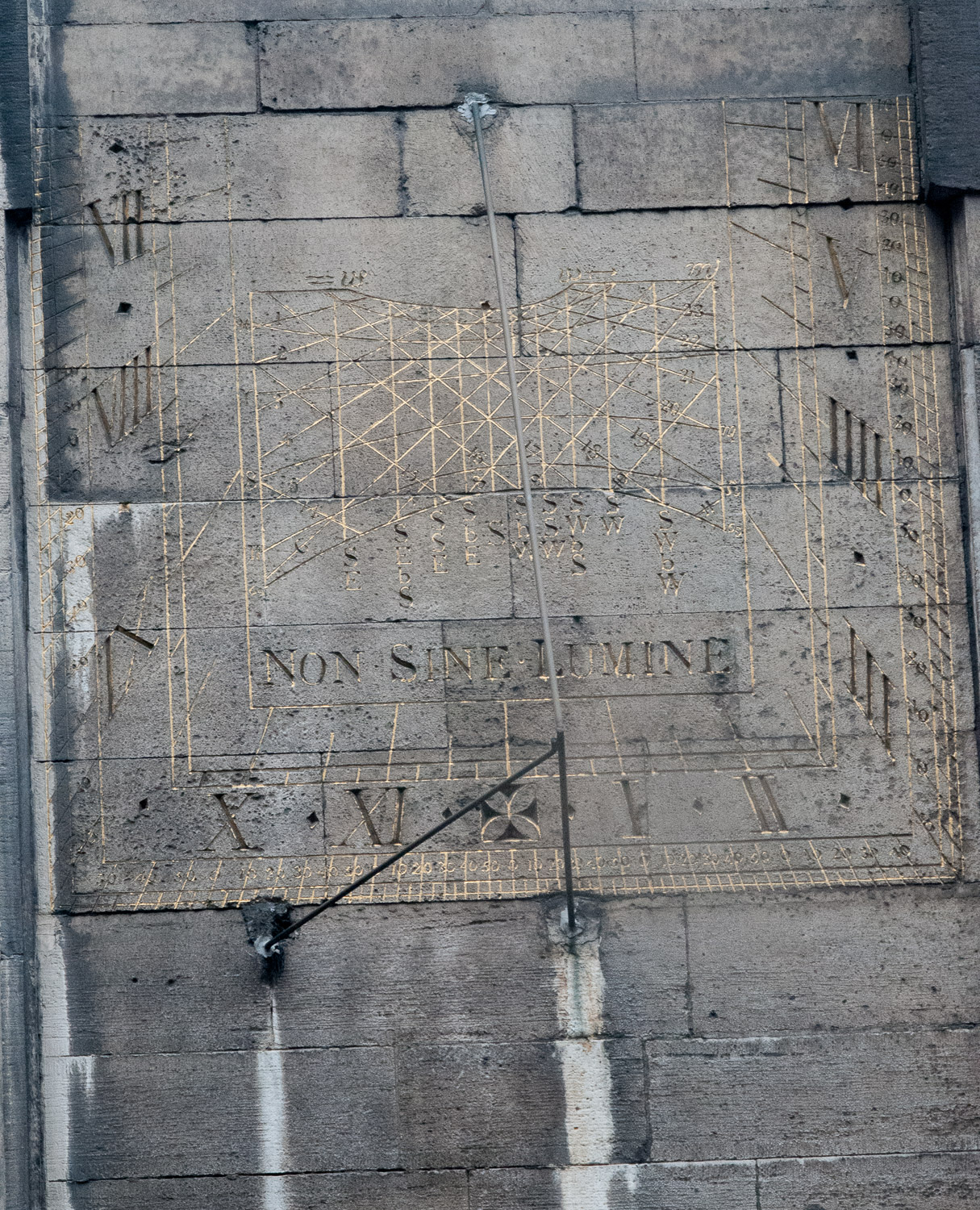 The Jacobean church of St Katharine Cree in Leadenhall Street was built between 1628 and 1630 and survived the Great Fire of 1666. On the south wall is this wonderful dial, circa 1700, which is described as having ‘gilded embellishments including declining lines, Babylonian/Latin hours and Zodiac signs’. Its Latin motto Non Sine Lumine means Nothing without Light.

And finally, this dial in Fournier Street. 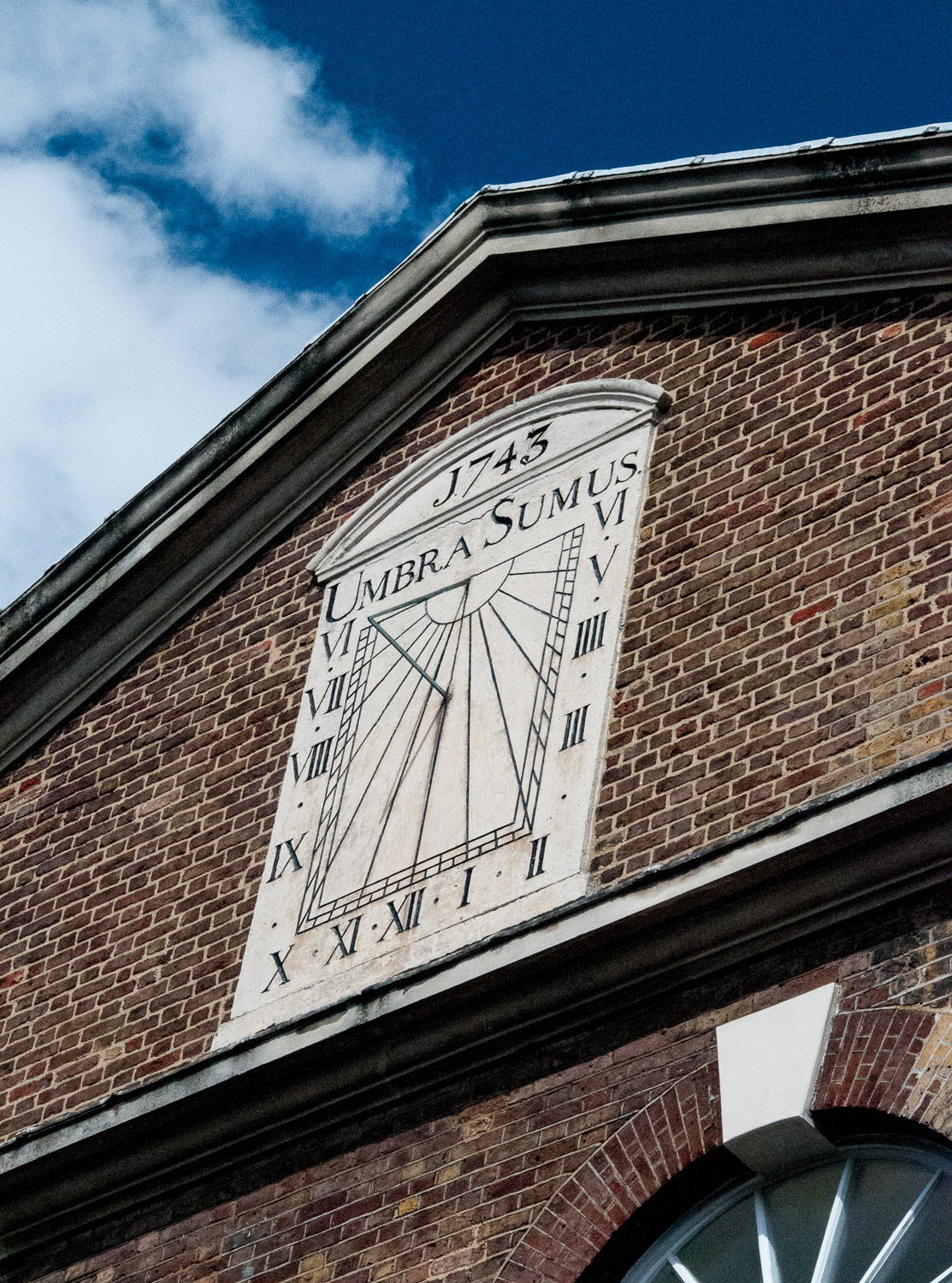 Once a Protestant church, then a Methodist Chapel, next a Jewish synagogue and now the Brick Lane Mosque

In the late 17th century some 40-50,000 French Protestants, known as Huguenots, fleeing persecution in France, arrived in England with around half settling in Spitalfields. They started a local silk-weaving industry and, incidentally, gave us a new word ‘refugee’ from the French word réfugié, ‘one who seeks sanctuary’. They flourished and established this church in 1743 naming it La Neuve Eglise (The New Church) and installed the sundial we can see today with the poignant inscription Umbra Sumus – ‘We are shadows’. 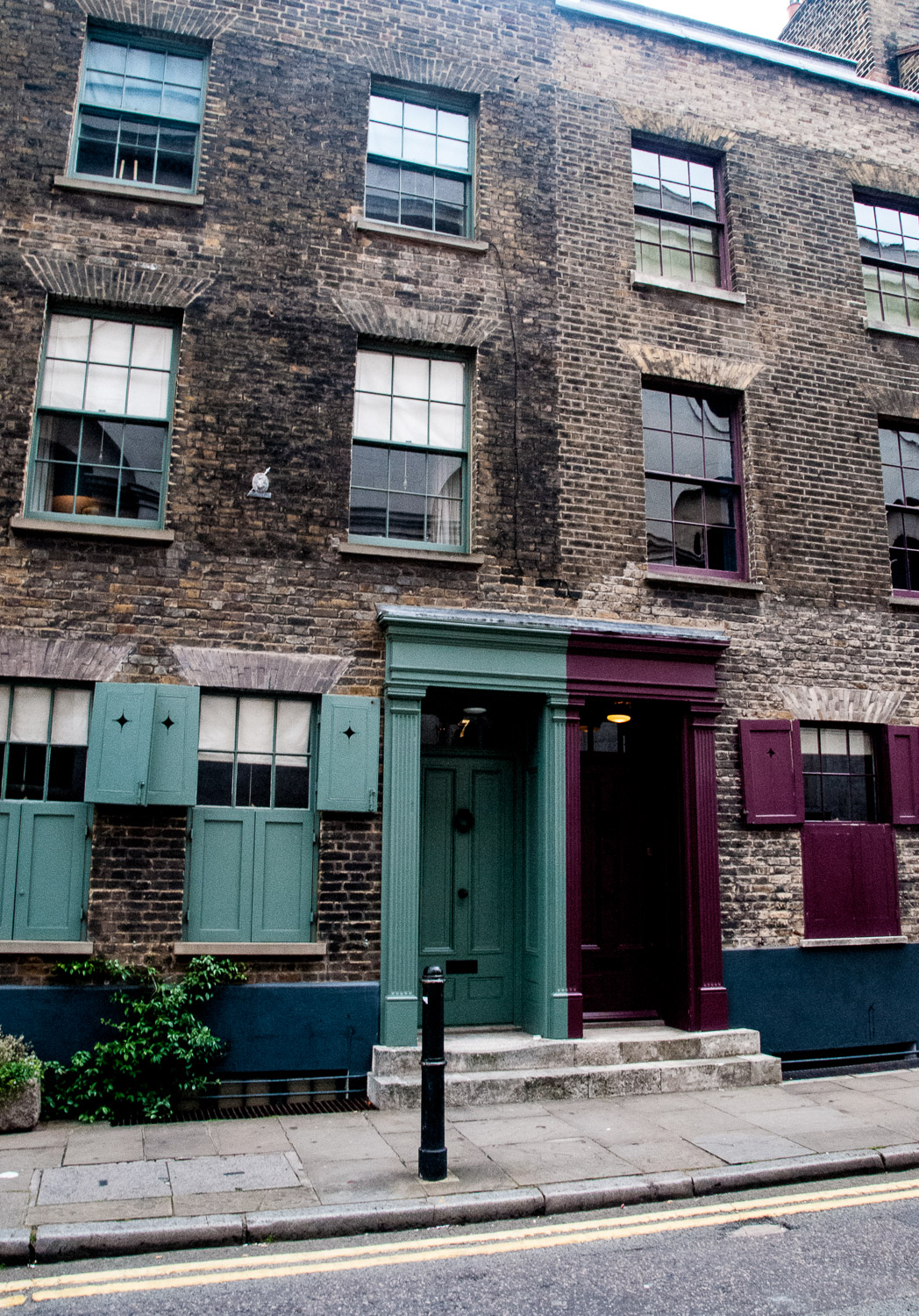 Driven out by the decline of the weaving trade and anti-French feeling, the Huguenots slowly dispersed and their church was for a while taken over by ‘The London Society for promoting Christianity among the Jews’. Not being very successful, they moved out after ten years and the next tenants were John Wesley’s Methodists, who refurbished the building.

From the 1880s onwards, the East End population underwent another significant upheaval as thousands of Jews arrived fleeing poverty, pogroms, war and revolution. Many settled  in Spitalfields and Whitechapel, close to where they arrived in the docks, setting up numerous businesses. 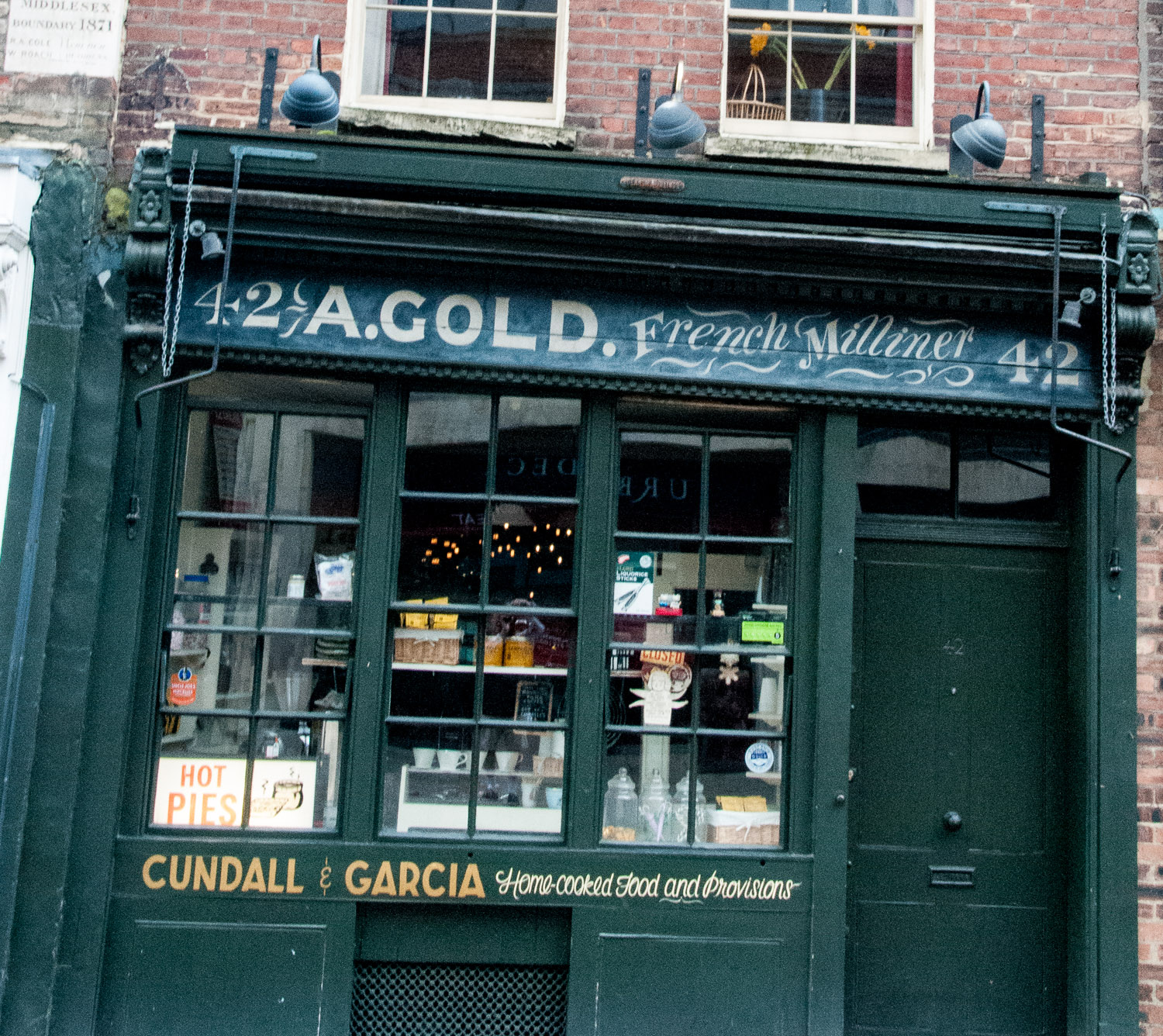 Built in the 1780s, in the 1880s this shop was once the business premises of a Jewish immigrant from Hungary, a lady called Amelia Gold. Describing herself as a ‘milliner’ indicates that she was a very accomplished, professional maker of ladies’ hats rather than simply a retailer.

The famous entertainer Bud Flanagan was born nearby. His parents Wolf and Yetta (Kitty) Weintrop were Polish Jews who set off for New York in order to flee the pogroms. Sadly for them, a dishonest ticket agent sold them a ticket that only took them as far as London, where they eventually set up a barber shop and tobacconist. 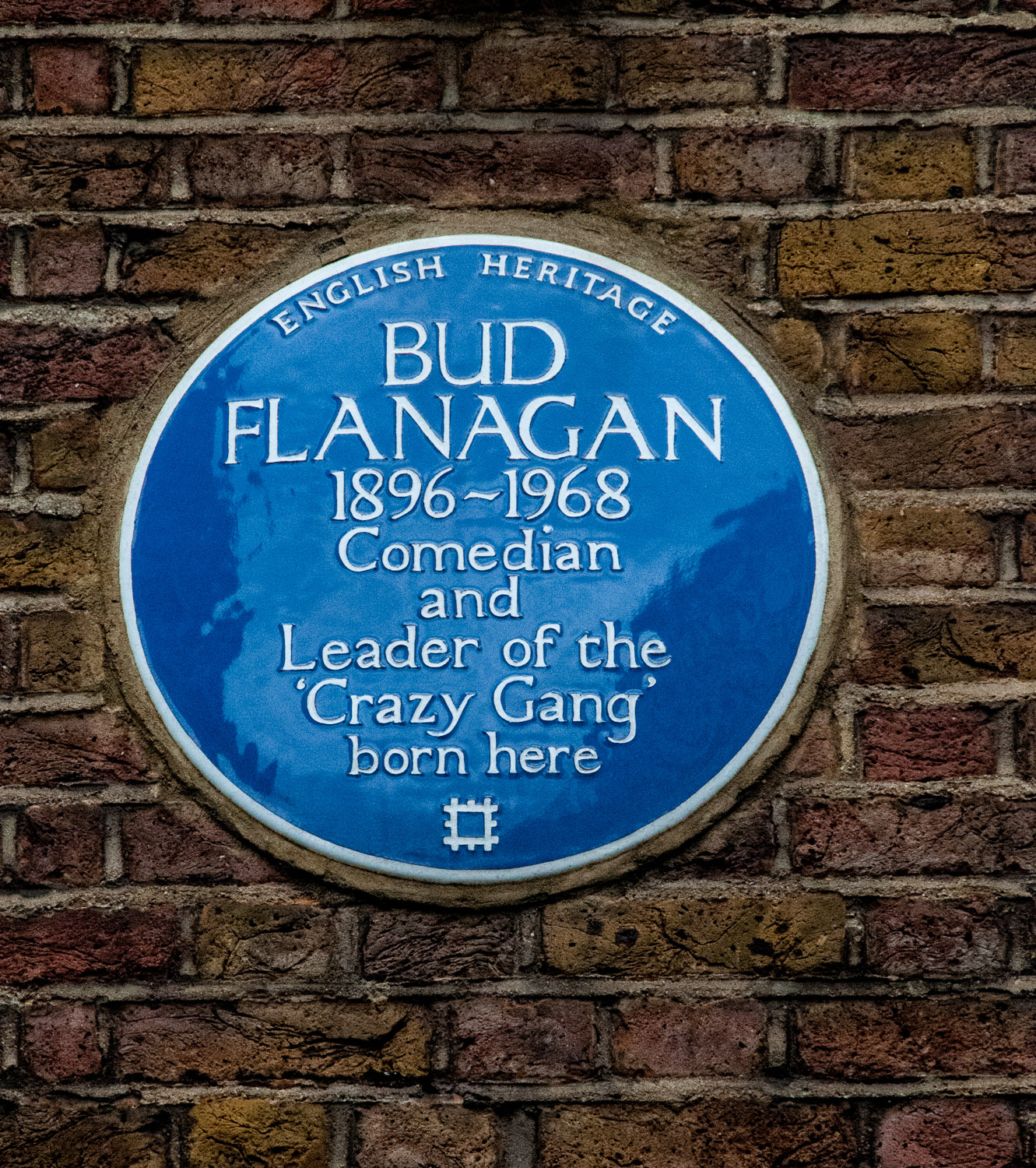 By the late 19th Century the Methodists had left and the building became the Spitalfields Great Synagogue. However, as the 20th century wore on, many Jews were leaving the East End and the synagogue relocated to Golders Green in 1970. During the 1970s, the area became populated mainly by Bangladeshis who had come to Britain looking for work and often found it in factories and the textile trade. That growing community required a place of worship, and the building was bought and refurbished. In 1976, it reopened as a mosque, the London Jamme Masjid. Today, although it has been renamed, it still serves the Bangladeshi community as a mosque.

A while ago, The Economist ran an article about multicultural London and I would like to end with two quotes from it that I particularly liked since they reference the building.

Because it is a human entrepôt, Spitalfields remains one of London’s poorest and most conservative districts; but now, for the same reason, it is also among the hippest. When old men in traditional dress congregate beneath the mosque’s prophetic sundial, immodestly clad young women weave between them